In the wild animal world, there are a number of nurturing males, including the seahorse.

The lined seahorse gets its name from its vertical stripes. They can change colors to provide camouflage or denote mood. Photo: Linda De Volder
by J. Morton Galetto, CU Maurice River 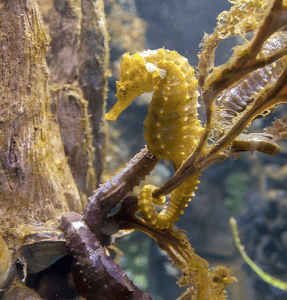 When it comes to fathering, the animal world exhibits a spectrum from love ’em and leave ’em to champion surveillance. In honor of Father’s Day, let’s discuss some superior dads.

In the animal kingdom, the emperor penguin male takes sole responsibility for incubating an egg. It is balanced on his feet, which he shuffles along the ice of Antarctica for two months, enduring 125 mph winds and –40 degree temperatures. Hundreds of huddling fathers bear this responsibility while their mates are at sea fattening-up. This story of dedication and endurance is powerful and heart-warming. Emperor penguins’ dedication leads them to be described as the No. 1 exemplary father in a multitude of articles. I highly recommend the 2005 film March of the Penguins, which documents this challenging fatherly devotion.

But our story is not about parental neglect; it is about celebrating great dads.

Let’s bring it home a bit, since most of us will never visit Antarctica and certainly not in 125 mph winds. We’ll explore some local creatures and focus on one unexpected twist in fathering. In past articles, we have discussed some dutiful parents of the avian variety. Kingfisher males build a bachelor burrow about 10 feet from the main nesting hole, from which they provide food for their incubating mate, take over incubating responsibilities when she hunts, and deliver meals subsequently to the chicks. The close proximity of the hole gives the male an advantage in knowing when he is needed in the main burrow. He’s always on call!

Osprey males help build the nest, incubate on occasion, and provide fish daily for nine weeks—up to six pounds a day when chicks near fledging. Nuthatches and many other songbirds provide endless caterpillars and other insects to their hatchlings.

Time for a little math. Chickadees bring 350 to 570 meals a day, depending on brood size, to their nestlings. Chicks fledge at about 18 days so that equals 6,000 to 9,000 trips to raise their offspring successfully. Parenting is a team effort.

Owls and other raptors share in providing sustenance to their young. “Ducks?” you ask. Well, they might benefit from watching The March of the Penguins, too.

Of our local mammals, red and grey foxes are called out as good providers. Males deliver food to the den while the cubs and mother stay secluded. After about three months this service stops, encouraging the cubs to look out for themselves. But in order for the cubs to be successful and learn to hunt on their own, the father stashes food for them to discover so they don’t have to go cold turkey. Male foxes also play with their cubs, teaching them socialization skills. And speaking of turkey and foxes, on two separate occasions I have seen a hen bird chase a fox away from her chicks. Brave mama!

In a previous article we spoke about catfish that guard and aerate their eggs by fanning their tail. Now we return to the waters for our subject species—not freshwater but our tidal bays and their grasses. One animal might just reign supreme when it comes to fatherhood. That would be the lined seahorse, sometimes called the northern seahorse (Hippocampus erectus), which is one of 54 species of seahorses worldwide.

Hippocampus erectus is considered one of the larger seahorses, with varying accounts of them growing to be from four to eight inches. They do not have scales like other fish but rather are made up of bony plates beneath their skin that help to armor them against the elements. The “lined” in their popular name refers to the dark horizontal lines on a lighter background, and “seahorse” comes from their horse-shaped head. Their scientific name derives from hippos meaning horse and erectus describing their erect or vertical position in the water.

Seahorse mating begins with ritual dances (May through October) each morning to establish lifelong bonds for the monogamous duo. During courtship they swim side by side in mirror-like movements. They make clicking sounds in this sexy flamenco; note the Spanish side of my genetic code making this about castanets and romance.

That’s not all; they are able to change color to blend in with their surroundings. So in this dance, seahorses often intertwine tails and shift their hue to gray, black, red, green, olive, orange, brassy, or yellow—very fancy. They can have fleshy tabs that further camouflage them against their surroundings. Their color is not only for camouflage but can vary based upon mood, stress, diet, and environment. They have prehensile tails that can grasp objects, including each other. Dance class has just advanced to a tango!

Their bond is so strong that if a mate is lost the widower may not ever find another one.

The male has something unique to seahorses—a male brood pouch. The female deposits her eggs in his pouch where they are internally fertilized by him. Then he incubates them for 21 days, such that he is in essence pregnant. When the embryos are fully matured they hatch from their egg within the pouch. He thrusts his belly region forward in contractions that expel the young, head first. Each juvenile is a miniature of its adult counterpart. One hundred to 1,000 young are released at a birthing. Each is about 5/8 of an inch; not until about eight to 10 months do they reach their adult size.

Sadly, if he does not expel all of the young a remaining unhatched egg will create a gas in the pouch that floats him to the surface where he becomes food for other aquatic animals.

Why the prehensile tail? Seahorses have tiny fins, both dorsal and pectoral, that are not very effective against currents. The pectoral fins are behind what would be a mandible in a horse’s head, allowing them to steer. The dorsal fin on their back propels them forward, beating 20 to 30 times per second, which makes seeing them in action very difficult. (In comparison, hummingbirds beat about 53 beats per second.) Lined seahorses are small and subject to being pummeled about by currents. Thus the prehensile tail enables them to anchor to grasses.

This raises an important conservation issue. Submerged aquatic vegetation is often in short supply because of pollution issues, disturbance from boat propellors, and scouring of the bottom by jetskis, WaveRunners, and the like. Nitrogen overload from stormwater runoff containing lawn fertilizers and other chemicals causes excessive algae, which blocks sunlight needed for seagrasses and kills them. When they decay, it reduces dissolved oxygen necessary for aquatic organisms to survive.

Seahorse habitat includes seagrasses, reefs, mangroves, and, as already mentioned, estuaries. Dr. Amanda Vincent, University of British Columbia and a seahorse expert, identifies many worldwide threats to seahorses beyond grass depletion. Some of these are bycatch or accidental capture in fishing gear; trawling that destroys bottom habitat; and Chinese traditional medicines that target seahorses to grind up for ancient remedies. There is a pet trade for seahorses and dried seahorses are also marketed in seaside shops. More than 20 million seahorses are collected each year. Vincent suggests that the most beneficial thing you can do for seahorses is to stop buying shrimp because shrimp trawlers capture them as bycatch and rip up seagrass. She also notes that their reproductive system is so rare in the animal kingdom that we have much to learn from “Mr. Moms.”

Hippocampus erectus exists in coastal waters from Nova Scotia to Argentina. Their populations are considered vulnerable and some have crashed by greater than 50 percent over the past five years. We can do a lot to protect them in New Jersey waters, primarily by limiting or eliminating our use of fertilizers and not operating crafts in shallows. And yes, eating less shrimp, a new challenge for me. But yeah, it’s the least we can do for such a diligent dad. n