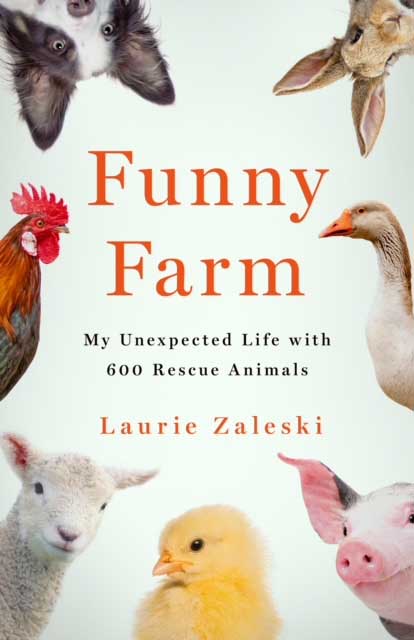 At The Funny Farm, one of the largest animal rescues in the Northeast, many different animals live together and roam freely, and the odd and unlikely friendships that develop reveal lessons of

kindness and cooperation. Laurie Zaleski shares the inspiring story of how it all started in Funny Farm: My Unexpected Life with 600 Rescue Animals (Feb. 22, St. Martin’s Press; $27.99).

USA Today’s Barbara VanDenburgh scoped out the shelves for this week’s hottest new book releases, and includes Zeleski’s book on her list of “Five New Books Not to Miss.”

A rescue story on many levels, Funny Farm is a daughter’s story of promises kept, dreams fulfilled, and animals lost and found. And it’s the story of the brave, incredible, and adorable animals who found a home at the Funny Farm, and who inspire thousands of visitors each year.

Author Laurie Zaleski is the founder of the Funny Farm, a charitable organization located in Mizpah. Since 2000, the farm has welcomed all kinds of rescue animals. Laurie is also the founder, president and CEO of Art-Z Graphics. She has been named a New Jersey Heartland Hero, is listed in the 2019 Who’s Who of Professional Women, and has received numerous awards and acknowledgements for her work to save animals and educate the public about animal abuse.

At 25, with just the clothes on her back and three small children in tow, Laurie’s mother Annie fled an abusive marriage, going from upper middle-class comfort to a one-bedroom shack in the woods. She scraped by with menial jobs, including cleaning cages at the local animal control, and soon began saving the homeless animals, bringing them to (and sometimes inside) the family’s home.

Laurie Zaleski recounts a hardscrabble childhood, but also a rollicking, offbeat, boisterous life, loaded with more fun and adventures than anyone she knew, including chasing a runaway stallion down a four-lane highway in a car, and taking a cow to school for show-and-tell. When the car broke down, Laurie’s mom even used a horse to run errands or go to her job, “parking” her in the parking lot, with a feedbag and a couple of apples.

Laurie swore as a child that she’d one day buy her mom a farm of her own, so she could retire and do nothing but save animals. Years later, as a successful businesswoman, she did just that, buying a 15-acre farmstead in the New Jersey woods.