Winter at the Delaware Bayshore is a good time for birdwatchers to view waterfowl, especially ducks. 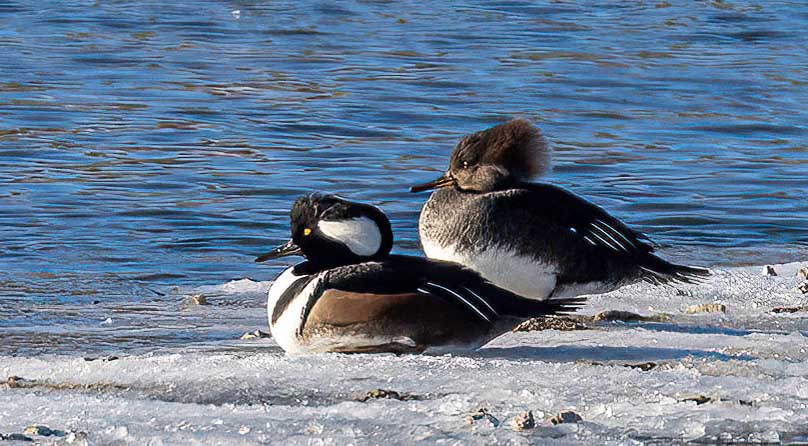 The hooded merganser is one of three mergansers wintering in South Jersey. Shown here is a drake, left, and his hen. Photo: David Mitchell, Flickr
by Anthony Klock, CU Maurice River

Every season along the Delaware Bayshore rewards those who take the time to appreciate what natural wonders each season has to offer. This is especially true for birdwatchers. With the arrival of spring and summer, one witnesses the influx of songbirds and shorebirds from their wintering grounds in the tropics to breeding territories here in the middle latitudes, or from even much farther north in the Arctic. Autumn’s gusty cold fronts and northwest winds usher in the hawks and other raptors following the coast or mountain ridges and riding the winds to the south. This season, winter, is a special time for those of us who prize waterfowl, particularly ducks. Our region provides wintering habitat for more than two dozen species of ducks, joining those who make their homes along the Delaware Bayshore year-round.

There are two obvious distinctions among the ducks commonly encountered in South Jersey: They are the dabblers versus the divers. Dabbling ducks, including the American black duck, mallards, northern pintails, and American shovelers, feed on the surface and tip their heads into the water, stretching their necks to reach their desired food along the bottom. You often see them, heads submerged, with their rear ends sticking comically straight up out of the water. These birds are uniquely adapted to take advantage of food resources located in shallow ponds, along grassy streambanks, or even in tidal saltwater marshes.

Dabblers are opportunistic and omnivorous feeders.They will eat seeds, roots, stems, grain, aquatic plants and insects, crustaceans, mollusks, and some small fish. Many of these ducks breed in the upper Midwest of the United States and south-central Canada in a region commonly referred to as the “Prairie Pothole,” because of the many small ponds and wetlands scattered throughout the area.

Diving ducks, on the other hand, completely submerge themselves to feed on seaweed, mollusks, fish, or the invertebrates abundant in our rivers, in the Bay, or out in the open ocean. Examples of some of our diving ducks include the mergansers, scoters, scaup, longtails, and the ubiquitous bufflehead. Most of our diving ducks breed fairly far to the north, ranging from the boreal forests of Canada up to the high Arctic.

The feathers of all birds are barbed, permitting them to essentially zip shut to protect the skin beneath. Both dabblers and divers have waterproof feathers that are adapted to ensure their survival in the harsh conditions common throughout the winter in South Jersey. When a mallard or other dabbler is on the water, its wings are tucked in close to the body, while feathers from its flanks will cover part of the wings. The result is a completely waterproof bottom and sides, similar to that of a boat.

The feathers of the scoter and other diving ducks are also specially adapted to stop water from being forced through the gaps in the feathers to reach the skin. Feathers are more closely barbed, which means they have the ability to close fairly tightly, preventing water droplets from penetrating between them despite the substantial water pressures that these ducks experience while diving.

Interestingly, ducks’ legs and feet do not have feathers and are directly exposed to the frigid water. However, the blood vessels in their legs are so intertwined that the blood being pumped from the heart to these extremities can indirectly transfer upwards of 80 percent of its warmth to the blood vessels that bring blood back to the heart. This aids in maintaining critical core body temperature; thus, their legs and feet are not as cold as they might be otherwise.

The American black duck is a keystone species that breeds along the Delaware Bayshore, although recent surveys have shown a worrying decline in numbers throughout its traditional range. Easily identified by its raucous quack, when flushed the adult males appear uniformly dark with silver underwings. Black ducks typically prefer to breed in wooded habitats near ponds and streams. These dabblers’ dietary habits shift seasonally but they rely on aquatic plants as a mainstay. The black duck’s genetic similarity to the more promiscuous mallard has resulted in a substantial amount of mixing, causing sterile offspring, which could prove to be a long-term detriment to the survival of this species.

The smallest dabbling duck found in our wetlands is the green-winged teal. The drakes display a striking green mask from their eyes to the back of their heads. Both sexes will flash a bright green speculum patch on their upper wing in flight, and they give off more of a whistle than the traditional duck’s quack. Interestingly, their bills have comb-like structures called “lamellae,” which allow them to filter smaller invertebrates from the water than can other species of dabbling ducks.

One of our more commonly encountered small ducks are the buffleheads. These diminutive diving ducks with oversized bulbous heads are cavity nesters that are almost completely dependent on northern flickers for suitable nest sites, although they will readily take to nest boxes. Buffleheads breed in the boreal forest of Canada and spend the winters in our marshes, tidal creeks, and impoundments. During their short 12- to 25-second dives bufflehead hunt for aquatic invertebrates, crustaceans, and mollusks; they will typically swallow their food while still underwater. Later in the season, watch for the lively courtship displays that often involve a lot of head bobbing, splashing, and vocalizing.

Our last duck for discussion is the hooded merganser, one of three merganser species that winter in our area. Drakes have a distinctive retractable “hood,” which they readily flash. The hen’s hood is brown but very reminiscent of the male’s. All mergansers are divers and capture fish in their thin serrated bills. Hooded mergansers, however, have a more varied diet than the others and will take crustaceans, particularly crayfish. Their eyes are adapted to seeing underwater and they capture their prey by sight.

Some of the best places to locate these ducks and many more include Cape May Point State Park. The ponds there often have a great diversity of species. The Avalon seawall often has ducks diving among the rocks. Tuckahoe and Corbin City game preserves host large concentrations of dabbling ducks, especially northern pintails, black ducks, and American wigeon. Visit the Bayshore Center at Bivalve along the Maurice River for rafts of scaup, both greater and lesser, longtails, and, of course, buffleheads. There are often hooded mergansers out at Turkey Point Road in the Natural Lands Trust Glades Preserve.

Enjoy the ducks of winter; they’ll be headed north before you know it!