Once a sure thing, massive annual stopover of birds on Bayshore declines—with wide-ranging effects. 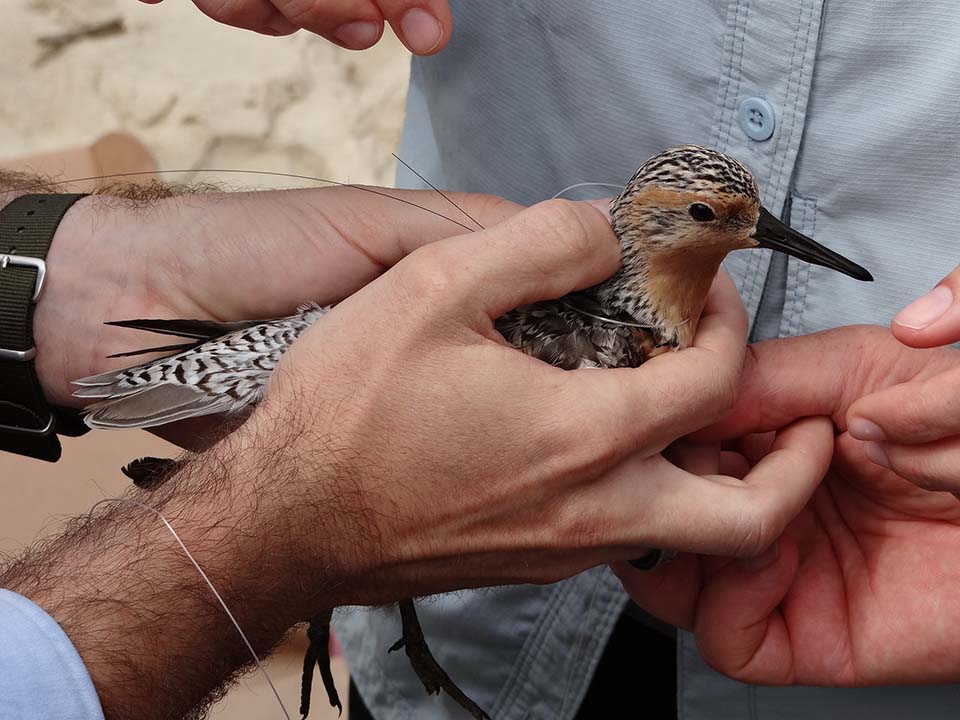 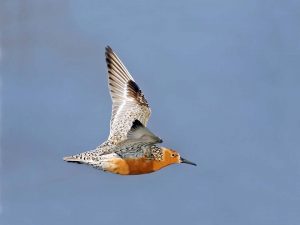 The din of laughing gulls hangs in the air like a familiar blanket. A chatter of plaintive calls, peeps, cherts, ‘kip’ sounds, and whistles mix for a cacophony atop the sandy shoreline. It’s May on the Delaware Bayshore, with cold mornings and warm afternoons in early weeks, and warm mornings and hot sticky afternoons toward the end of the month. Residents are making their homes ready for the summer season, painting, replacing screens, and stocking cabinets. Days can be glorious or miserable, plagued by gnats, strawberry flies, or an occasional storm.

Whatever the weather, for many Bayshore residents and a select group of scientists the shorebird migration, coupled with the horseshoe crab spawn, is quintessential Delaware South Jersey Bayshore. The idea of it not happening would be like waking up to a void in the familiar world, like no sunrise, no noise on the school playground, a mother whose child goes quiet poolside; it’s hard for me to come up with an analogy that I could bear to relay—such an unthinkable absence. Yet our shorebirds struggle on the brink of survival vs. extinction with each migratory season.

For more than 45 years scientists have been studying the interdependence of migrating shorebirds and spawning horseshoe crabs, and conservation leaders have been advocating for their mutual survival. This year a specific group, the New Jersey Shorebird Project (NJ DEP, Fish and Game, Endangered Species Program), marks their 25th year of study and analysis. 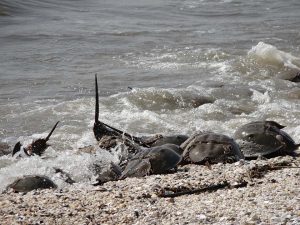 On May 14 researchers around the world, plus the current team, began to receive a bi-daily update from biologist Dr. Larry Niles, one of the project leaders. Its contents had a subtext of “it’s happening, we hope; it’s early, we’ll see; here’s what we are seeing; we hope they show up.” Or do I just assume this tone after years of holding our collective breath, since the overall population trajectory of many species of shorebirds migrating here from South America has dwindled in numbers since the early ’80s?

We made our first catch today of 120 knots and a handful of turnstones. It was a hard choice that worked out. Over the last few days, the number of red knots stayed at about 600 and very few turnstones and about 1,000 sanderlings. The winds were blowing from the north and we assumed the problem was the adverse conditions for migration. But we weren’t sure. Usually, we start on the 13th (yesterday) but with so few birds we had visions of last year where the birds came and left because the crab spawn didn’t really get underway until the third week of May and ultimately peaked in the first week of June. By then the knots and other species had left. Would this year be the same? Did knots decline after last year’s delay? 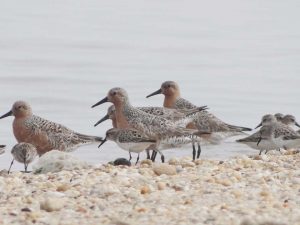 But eggs were building and so we assumed the problem was the adverse winds. Just to be sure we didn’t trap yesterday (the 13th) and instead carried out a boat count to be sure we weren’t missing knots in the areas between Bidwell’s and Maurice River. We found only 30 knots and a few other species. We also hit the rock jetty at Goshen creek and spent the afternoon struggling to get back to the dock.

This morning the number of knots jumped from about 600 to about 1,000 and it seemed more came in this morning. Among the 120 we caught 10 recaptures (which will warm Humphrey’s heart). The winds are fair and from the south so we expect more in the next day or two. Tomorrow we go for turnstones. —Larry

As of the 17th only 2,500 knots had arrived on the Bay vs. an anticipated 17,000.Each passing day brings new reports, and the hope is that the numbers of red knots and their cohorts will build so they can fuel up on crab eggs and fly on to Arctic nesting grounds. What’s not made clear in Larry’s correspondence is that the boat ran into trouble and the crew needed to wade in deep water to continue their survey. Yes, the project team needs to be driven, hardy, and willing to face adverse conditions. It’s not work for weenies.

A daily snapshot is not a study but it is a necessary component thereof, because it represents one of many compilations over many years from which conclusions can be drawn. Did water temperature and winds affect the horseshoe crabs’ ascent on to the beachfront? Did winds hold off the migration? Did beach erosion diminish habitat available to horseshoe crabs for egg laying? Is the number of eggs available to birds greater or declining? Multiple variables are continually collected, amassed, and analyzed. Are banner planes staying far enough off the shorefront so foraging shorebirds are not disturbed? Did people or dogs flush feeding birds making it difficult for them to nearly double their weight in just a couple of weeks? There are endless components that affect the productive success of the species, not just here but in South America and their Arctic nesting grounds, too.

Dr. Joanna Burger relays, “The study of the red knots of Delaware Bay is the longest running continuous study of a migratory shorebird, where the same protocols have been employed for 25 years. And further, we have data from 20 years before that on population levels. So correlations can be made from the 1980s until today.” Only long-term studies can show true population trends.

Burger reminded me that the red knot is on the federal threatened species list because the most information was amassed on this specific species. However, all of its cohort species are equally imperiled—semipalmated sandpipers, ruddy turnstones, and sanderlings. And all will benefit from whatever protections the red knot receives since their habitat needs are similar.

The welfare of the shorebirds migrating through Delaware Bay is reliant on the welfare of the horseshoe crabs. Some years horseshoe crabs come ashore late in the birds’ migration. Beachfronts may have suffered winter erosion or crabs’ numbers could have been severely jeopardized by harvest. Furthermore their conservation is not without controversy. Horseshoe crabs also serve other purposes. Whole females are used for bait in conch and eel traps. More crucially, they are harvested and bled because their blood contains chemical properties widely used by the pharmaceutical industry to detect gram-negative bacteria, and that harvest results in an unknown percentage of mortalities as well.

Every human vaccine, injectable, and transplant is tested using Limulus amebocyte lysate or LAL. Horseshoe crabs play an important historical role in the development of safe vaccines because their blood clots in the presence of bacteria. For years rabbits played this role but sometimes they died, plus results were not instantaneous or nearly as reliable. The LAL test is no longer the only choice but it’s still utilized because of foot dragging by our federal agencies to fully approve an artificial alternative called recombinant factor C or rFC. It actually has the same level of efficacy as LAL and is derived from worms that can be raised in labs. It involves a kind of cell cloning, there are no deaths, and no wild species are exploited. In other words, horseshoe crabs do not have to be bled, but still are.

Horseshoe crabs are called a living fossil, having existed unchanged for 445 million years—essentially 1,500 times longer than man, making them one of the most perfectly evolved and successful creatures on earth. In fact more medical discoveries have been made using horseshoe crabs than with any other living creature. And yet we have allowed them to be imperiled by harvest as bait and for the medical industry. Their largest known populations are now here in the Delaware Bay. Populations worldwide have either declined or have been extirpated.

In the earliest days the horseshoe crab harvesters were not interested in preserving this species. During meetings leading up to the moratorium that Gov. Christine Whitman placed on crab harvest, one crabber told Rutgers Ecologist Dr. Burger, and myself, “I might feel bad, but I would take the last horseshoe crab!” Some of the meetings and hearings between conservationists and fishermen became so contentious that we had to be escorted to and from the venues by conservation officers and state troopers.

Burger explained, “Commercial fishermen didn’t think of crabs as having anything to do with migratory shorebirds. When the moratorium was established I was placed on the Atlantic States Marine Fishery Committee’s Horseshoe Crab Technical Committee; everyone else was a commercial fisherman who wanted to take as many crabs as possible.” Conservation, shorebirds, and horseshoe crabs needed a voice.

Because of the inter-reliance of species and their food webs, biologists are continually moving conservation toward a holistic approach to protecting ecosystems. Thus the work of the shorebird scientists is not just about one shorebird species, nor is it just about shorebirds and horseshoe crabs. Dr. Niles explains that the horseshoe crab is a keystone species on which many species rely—weakfish, striped bass, eels, and many more, plus many others yet to be defined. In the end, we eat the fish at the top of the food chain (bass, bluefish, others), and commercial and recreational fisheries suffer when horseshoe crabs and their eggs decline. Neglecting crabs is to neglect the Bay’s health in its entirety.

The Technical Committee established a management plan for horseshoe crabs that had to include the welfare of shorebirds. This was the first two-species fisheries plan in the United States, truly a groundbreaking direction in protection. Never before had two different creatures been addressed collectively. “So instead of just trying to preserve horseshoe crabs for their own population numbers or for fisheries take, the Committee had to develop a plan that would sustain the migratory shorebirds as well,” Burger shared.

This ecosystem approach makes the Delaware Bay Shorebird Project and its associated work one of the most incredible studies in the entire world and has acted as a model for species researchers.

As I’m writing this we are beset by concern and held in suspense: Will the shorebirds come back? Did they successfully breed last summer in their Arctic nesting grounds? Will they return on their northern trek from South America to our shores to feast on horseshoe crab eggs? Will there be enough eggs for the shorebirds to nearly double their weight while here? Will the crabs come ashore at the right time to provide an abundance of eggs to feed them? These are not givens, and not every year is a success. Shorebird species numbers can’t be sustained if successive failures ensue. One season doesn’t give us the clarity to know the fate of these birds, but we know they can’t withstand much in the way of consecutive disasters. Their overall population trajectory simply will not allow it.

I asked Dr. Burger, “Tell me why anyone should care?” Her reply: “Because most species have an interaction and a relationship with other species in an ecosystem, so when we remove one species we don’t know the effect it will have in a long-term sense.”

Many wildlife habitats have been altered by people, and biologists often have to amend them to try to sustain species. Dr. Burger continued, “On a different level, on a moral level, we have a responsibility to leave wilderness and wildlife in the condition in which we found it. A colleague of mine restored a marsh in California. Everything appeared healthy—perfect. Then about 15 years later it collapsed—the marsh was unhealthy. It turned out one small necessary insect was missing. And the marsh wasn’t viable without it. So we don’t know the exact role of any species.”

Once they’re gone, we can’t bring them back. It’s better to preserve what we have than to try to restore habitats. For those of us who live locally, and are lucky enough to have this amazing migratory phenomenon take place in our region, our awareness and good fortune give us an added responsibility to protect these creatures.