This “real weasel” can be spotted along the Delaware Bayshore and in many other wild spaces in our region. 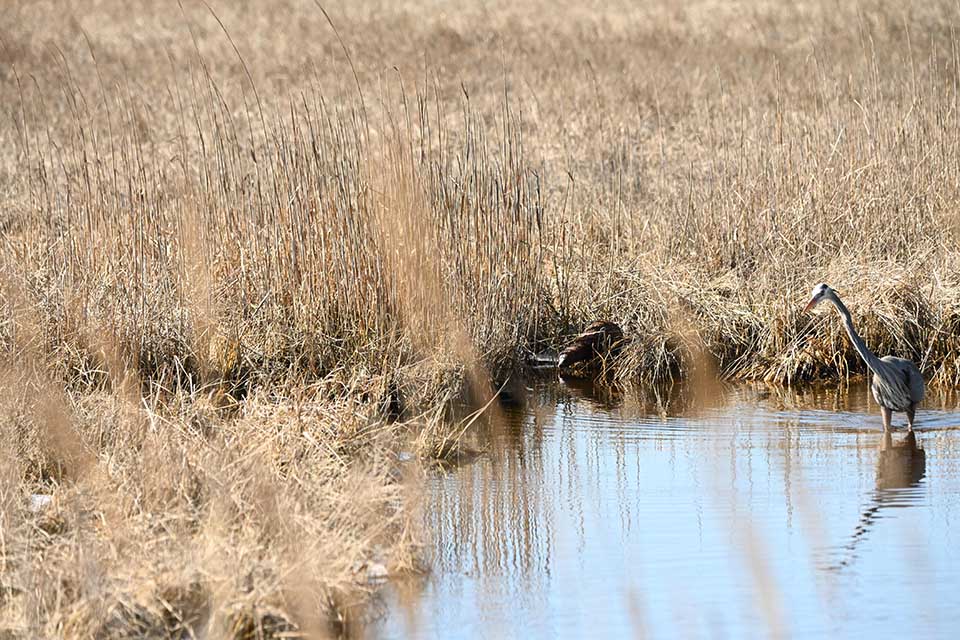 The author’s presence—and possibly the great blue heron—had this mink darting back and forth in the reeds at Turkey Point. Photo by author
by J. Morton Galetto, CU Maurice River

In early spring a few years back, my friend Christine and I embarked on the Elephant Swamp Nature Trail beginning in Elmer. We were scouting for a future CU Maurice River hike and frog outing. The walk extends for five miles into Monroeville along a former railroad bed. You are likely familiar with the many programs nationwide that have turned abandoned railroad beds into hiking paths. This trail is one such example. It is frequented by bicyclists, hikers, birdwatchers, runners, and dog walkers, and you may wish to check it out. It is my understanding that Elk Township is the trail’s guardian. The swamp is said to have gotten its name from an early 1800s incident in which an elephant escaped from a circus train travelling this former Pennsylvania-Reading railroad line. I’m not sure if the story is lore or fact but it certainly seems colorful. I suspect the hunt was a real three-ring circus.

The trail parallels Muddy Run, a northern tributary of the Maurice River, and it is crossed by Reed Run and a number of other small streams. Along the trail in the spring we see migrating birds, small mammals, wood ducks, and such. The adjacent water offers a host of wildlife viewing possibilities. We found a number of vernal pools with frogs and were hopeful that one of the sites might be a prospective site for a future frog slog event.

The trees were only just beginning to show new foliage. Litter was thick on the forest floor and we noted a sunny spot where an animal was frolicking in the detritus. Leaves were being tossed about and in the middle of the tornado of activity was a shimmering chocolate brown pelage. The sheen of the animal’s oily pelt was unmistakable—a mink. It was rather petite, and since the new year’s litter would not yet have been born, I suspect it was a female. She entertained us for many minutes; I suppose the watery ditch between us gave her a sense of safety. I’ve often found that animals are also less wary of people when movements are predictable or limited. Thus, trails bordered by water and especially swamp boardwalks provide wildlife viewers more opportunities to observe nature.

The short legs, long body, and tapered snout of a mink is typical of the Mustelidae or weasel family. Ermines, badgers, martens, otters, and wolverines are all included in this family. Adult males can be as lengthy as 22 to 27 inches, including their tail, and weigh up to two or three pounds. Females are about a third smaller, 18 to 22 inches. Tails vary from 6 to 10 inches in length.

The expression “He’s a real weasel” is not without merit. Members of the Mustelidae family are known for their cunning nature and ferocity. They have few predators, being swift, agile, good climbers, excellent slitherers, and packing a nasty bite. They also have scent glands that can’t necessarily be directed but the spray can travel 12 inches and is clearly a deterrent to would-be diners. When push comes to shove they are formidable opponents that even larger animals prefer to leave alone. Regardless, sizable birds of prey, coyotes, and bobcats can and do capture mink, but other meals are much less problematic to take safely, so they are not preferred fare.

The most likely causes of their numbers decreasing are destruction of habitat, chemical contaminants, and trapping. Mercury can also accumulate in their reproductive system and cause fertility issues. Conversely the regulation of trapping and decrease in the popularity of furs has had positive effects on their population.

Today American mink populations appear to be stable. They are considered present in all states but Arizona and in most of Canada; they tend to be absent in very arid regions.

Farm-raised mink can vary widely in color but the American mink, Neovison, is always a deep chocolate brown, often with a white spot on the chest and chin. American mink do not turn white in the winter like northern weasels. Their soft thick coat is made of oily guard hairs that shimmer in the sun and also repel water. Minks are semi-aquatic, so a life by the Elephant Trail is well suited to our subject species. I’ve seen them along the Bayshore, especially at Turkey Point and Fortescue, but that may be more a factor of my frequency than theirs. They exist in many places.

Females are mature by 10 months of age and breed during February and March. Evidently the male is a very aggressive suitor, biting and holding the female by its nape with needle-like teeth. Females are receptive at 7 to 10 day intervals throughout the breeding season, such that they can mate with more than one male. Their reproductive style is solitary, a “love ’em and leave ’em” courtship. The female has sole responsibility for the young.

Gestation is variable, caused by the fact that the embryo can stop developing for a period of time; therefore incubation lasts 40 to 75 days and on average 4 to 52 days. The mid-April/May newborns are pink, covered with a very thin coat of hair, and are about half the size of a ballpark frankfurter. When weaned in about five to six weeks their eyes are open and they are carnivorous. By the end of summer, at about four months of age, they will have adopted a solitary lifestyle like their adult counterparts.

Males are thought to be especially territorial. Their lifespan is about three years in the wild and 10 years in captivity. That is not to say they make good pets; they do not. They are wild animals and remember, they are weasels!

Mink are nocturnal but especially active at dawn and dusk (crepuscular). Wetland and riverine habitats are their preferred environs. They are excellent swimmers, with partially webbed feet, and can swim for 50 to 100 feet (source dependent) and stay submerged for five minutes. This attribute makes possible their capturing many aquatic species like ducks, frogs, fish, and snakes.

Researchers found that aquatic prey constituted a large part of their diet. It’s also suggested that their long thin bodies are prone to heat loss and not especially well-insulated. If you’ve ever worn a fur coat you will find this difficult to believe, but I believe in science so I’m going with it. In spite of heat loss they can make over 100 dives a day, and some were discovered to make 28 consecutive dives in 36 minutes! Smaller animals, essentially females, were more persistent than males even in decreasing temperatures with less body mass. And both sexes fished more during the day than at night. How that constitutes being nocturnal I cannot say.

Climbing allows them to eat not just ground nesting birds’ eggs and young but also tree nesters’ clutches. Rabbits, hares, voles, moles, mice, and the like are also on the menu. They keep many small mammals in check especially during those species’ breeding periods.

Minks are known to be intelligent. On one particular occasion I believe one toyed with me. I was on a boat ramp in Canada posing for a picture with the Bay of Fundy as a backdrop. And the photographer yelled, “Mink!” as one scampered behind me. I turned to my right only to have the mink run off to my left. This continued for about five minutes, as I caught just a glimpse of the suspect each time I turned in the wrong direction, obviously not seeing what everyone else was seeing. Finally the mink came out and looked at me defiantly. In the end I felt a bit like Elmer Fudd with the mink playing Bugs Bunny. I simply threw up my arms and relinquished the ramp to its rightful owner.

Sometimes we simply have to recognize who has the upper paw.