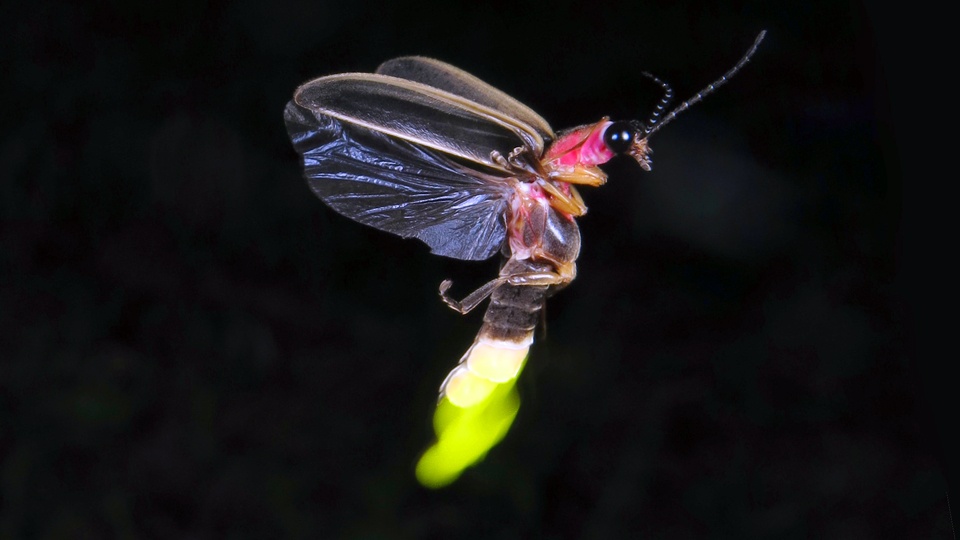 One of my great joys as a child was capturing lightning bugs. We would cup our hands and wait for them to signal to their mates. I especially enjoyed clasping my hands together and peeking though a hole between my thumbs to view their luminescence. Sometimes we would put a number in a jar with small holes punctured in the lid with an ice pick and pretend we had a bug-powered lightbulb. Because as a child I was a fingernail biter and thumb sucker, I discovered that they secreted a very bitter substance. In short course I learned not to put my hands in my mouth after an evening of capturing fireflies.

I suspect that many of you also have experienced the magic of lightning bugs either as a child or a big kid at heart. But did you know that there has been a worldwide decline in their population? I’m going to endeavor to tell you about lightning bugs’ (or fireflies’) life history, their challenges, and how you can help to ensure their survival.

In the Delaware Valley the only terrestrial creatures that have bioluminescence are fireflies and glowworms. Glowworms can be juvenile fireflies or a genre unto themselves. There are some bacteria and fungi that also glow, but these are not considered animals; there is no luminescence in higher invertebrates above fish. Most of the creatures that emit their own chemical light live in our oceans.

Worldwide there are thought to be 2,000 species of fireflies, while North America is home to 170 and New Jersey has 19. The two most common are the eastern firefly Photinus, about 1/2 inch long, and the Pennsylvania firefly Photuris, a tad larger, and by the way Pennsylvania’s state insect. Our state insect is the honeybee, although it is not native to the United States.

Fireflies’ glow is a cold light made by a chemical reaction between an enzyme called luciferase—luciferin combined with oxygen. The glow can be yellow, orange, green, or even blue, depending on the species. If you’re an expert in fireflies you’d identify many by the flashing patterns and color they display. Some fireflies don’t glow at all, and none are really flies; they are beetles.

What’s with all the flashing? Males fly about and announce their availability to perched females. If a female signals back, mating is a possible outcome. The height of activity is during the breeding season. In our area the peak is in July; by the end of the month only stragglers are advertising for dates.

There is a phenomenon that takes place in some regions known as phase synchronization, where large groups will flash in unison. In fact this takes place with such regularity that, in the beginning of June, nature tourism in Elkmont, Tennessee and Congaree National Park, South Carolina is heightened by the phenomenon.

So what happens after all that mating? Like all beetles there is a four-stage lifecycle—egg, larva, pupa, adult. The female lays her eggs on the ground in moist leaf litter or rotting wood. The larvae overwinter underground, come out in the spring, feed for a period, and then pupate for a week or two, emerging as adults in June and July.

Pupa is an insect’s transformative inactive stage between larva and adult form. Larvae are carnivorous, eating insects, earthworms, snails, and slugs. Scientists do not know what they eat as adult beetles, possibly pollen or nothing at all. In the adult stage reproduction is the focus and key to survival. The average lifespan looks like this—three weeks as pupa, three or four weeks as adults, three weeks as eggs, and one or two years in the larvae stage.

Larva also glows and its intent is to warn off would-be predators. Fireflies shed blood in a process known as “reflex bleeding.” The chemicals in this blood taste bitter. Steroid pyrones called lucibufagins contribute to a nasty taste, which is similar to the cardiotonic bufadienolides found in some poisonous toads. Would-be predators like rodents and birds may try one but they are unlikely to eat a second. Thus, some sacrifice their lives so others will survive. Lightning bugs can be cannibalistic, which seems counterproductive. Photuris females will mimic the photic signaling patterns of Photinus females in order lure in a Photinus male for supper.

I’ve decided not to let their personal habits extinguish my fascination. Let’s face it, you know they are magical and like me you probably would like to ensure that future generations get to enjoy them, too.

So what is causing their decline? Like most of our earth’s creatures, habitat loss and degradation are responsible for declines and extinctions. Development and urban sprawl that eliminate their habitat threatens their ability to satisfy their primary needs. They like woodland edges, moist ground, shrubby layers, loose bark, fallen trees, and streams. Our overly manicured yards, pesticide use, endless lawns, and night lighting all pose threats. Light pollution from our well-lit yards obscures their mating signals. Our vehicles cause mortalities too; some areas can wipe out numerous beetles through traffic on busy roads.

How can you make a difference? You can make use of the best mulch for your garden beds—leaves. Don’t send them to the municipal compost facility but rather put them on your garden beds. They will hold moisture and provide habitat for fireflies, as well as butterflies and other pollinators. If you don’t have garden beds you could plant them, using native shrubs for females to use as display perches. Consider a pond without fish for additional moisture. This will attract dragonflies that will eat mosquitoes. Lessen or eliminate pesticide use or at very least use integrated pest management practices. Put motion sensors on yard lights. By the way, did you know that studies show that criminals don’t like the dark either? Crime takes place more frequently in well-lit areas than in dim or unlit areas. Tripping or falling in the dark isn’t wise either, so consider motion sensors while extinguishing lights that are unnecessary.

Then, if everything goes well, invite your children to marvel at their glow—or the neighborhood children or grandchildren. Don’t forget the lemonade, and give me a call!