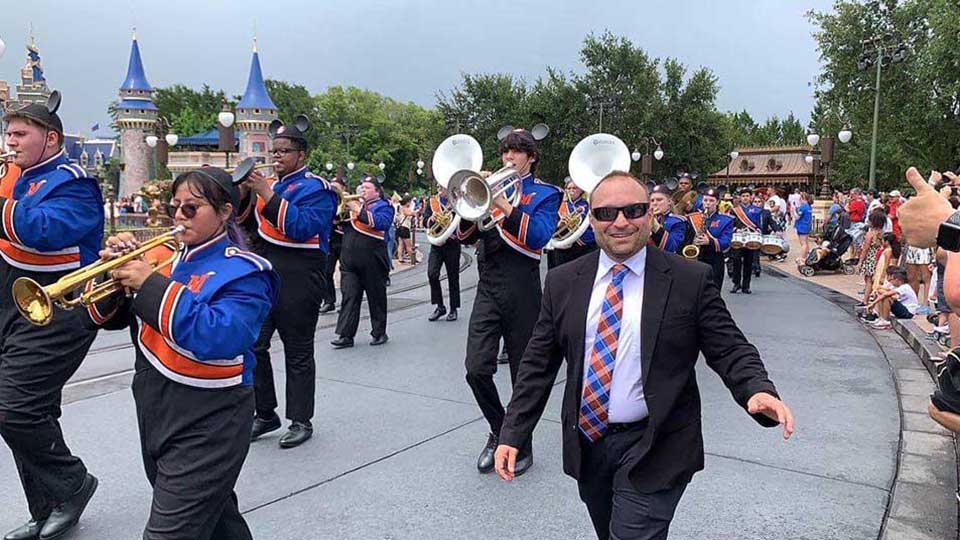 Director Rob DeSantis with marching band at Disney World, where they perform every four years.
by L.M. Jarvis Rob DeSantis was 22 when he got the job as band director of the Millville Marching Bolts. It felt a little weird that he was teaching 18-year-old seniors that first year, way back in 2003.

“I was a baby,” he admits. DeSantis, now 41, was stepping in the shoes of previous directors Steve Price and Jim Mark.

That first year, there were about 25 members of the high school marching band. It was small, but that was exactly where he wanted to start.

“I wanted high school, and I got lucky enough to get one, and we just kept building it up,” he said.

Now in his 20th year, the veteran band director is helming the school’s music students during a time of major change at Millville High School. The school, which has doubled in size, will soon feature a new, state-of-the-art theater, adjacent to newly renovated music rooms.

Pre-Covid, DeSantis’ numbers exceeded 100 band members. Today, they are around 85, but he expects that to continue to grow.

It turns out band directors and football coaches have a few things in common. Recruiting is a big part of it.

DeSantis sends members of his music honor society, called Tri-M, to the schools for a few one-on-one lessons with the youngest music students. The teachers talk frequently about the students who show promise, a practice that helps keep the band strong. Like the best athletes who show the most promise, the best prospects catch the eyes of the music coaches.

“We know who everybody is by the time they get here,” he said. “And the kids know us, too, because we’re in the lower grades all the time. That’s the only way to do it, really.”

DeSantis has a few incentives, such as a trip to Walt Disney World in Florida once every four years. It’s a way to ensure that everyone gets to enjoy the trip once during their four years at the high school.

“Now the kids recruit for us. They like it, so they tell their friends, and they join,” he said. “We don’t toot our own horn a lot. We just keep it in house.”

Students wake up wanting to go to school every morning because they might miss out on something important. Truth be told, it’s one of DeSantis’ secret weapons: Student initiative.

“They are invested in the school and they feel needed,” said DeSantis, a resident of Millville. “And I feel that’s the more valuable thing for a sport or a club. If you wake up every day and you feel needed, that’s what keeps you coming back to school.”

Just like with sports, the music program can be a stepping stone to choosing a college. They have had many music majors over the years, including this year, where there are two at West Chester University, two at Rowan University and one at Montclair.

Many of Millville’s music students have gone on to professional careers in music and music education, DeSantis said. One student, C.J. Camerieri—whom he calls the ‘Mike Trout’ of the music program—has gone on to share the stage with such musicians as Paul Simon, Bon Iver, and Sting. He started yMusic, a chamber ensemble, in 2008 and has also won two Grammy Awards. He released a solo album last year under the moniker CARM.

DeSantis points out that Camerieri wasn’t his student but is a proud 2000 graduate of the Millville program.

“My career in music couldn’t have been possible without the incredible music program at Millville’s public schools,” Camerieri wrote in an e-mail. “The support of the school district for the arts was unwavering while I was a student and I had countless inspiring experiences as a student that paved the way for my career as a musician. The opportunities to play music in marching band, jazz ensemble, pit orchestra, and concert band meant I was constantly honing my craft throughout school and was ready to take the next step as a student at The Juilliard School after graduating.”

DeSantis’ program has cabinets full of trophies, but it’s the band and the spring musical that have always meant the most to him. He gave up directing the spring musical, which now has district administrator Margaret Keefer as director. His last production was Les Miserables, the famed Broadway musical. It stands out in his mind, and likely always will. “There have been a few years where I conduct the last song and I am crying,” he admits.

In a generation of students, DeSantis has learned how to play to his band’s strengths and how to keep it all entertaining. He acknowledges the support of such people as Henry Hartman and Gene Tubertini, who both served as department chairpersons for many years. “A lot of people put us in the right place at the right time and gave us the resources,” he said.

Principal Jaime Sutton is proud of the music department’s accomplishments, including the marching band.

“Each year, Rob’s vision, along with our students’ talents, enables the program to expand to become bigger and better,” she said. “I am excited to see what the future holds for the Marching Bolts and our Fine and Performing Arts Program once the construction is complete at the high school.”

He is excited about how the program will develop in the high school’s new facilities. The new auditorium is scheduled to be completed some time in 2023, he said. It may remind local residents of the theater at Rowan College of New Jersey—Cumberland, formerly Cumberland County College. It will have a tech booth located at a higher vantage point. The band room and choral room nearby are situated adjacent to the stage of the theater that is currently under construction.

“We can roll right out onto the stage,” he said, smiling. “I can’t wait to do that.”

In addition, the band and chorus room share three soundproof practice rooms, as well as all new furniture, Bluetooth capabilities and speakers in the ceiling.

“It’s very much like a college situation,” he said.

For five years now, the music department has been forced to load up the truck and haul everything to Lakeside Middle School’s auditorium.

He said the changes will mean the department can add in more exciting, challenging content, something that will keep attracting students and capture their interests.

Among the things that have changed in the post-Covid years is digital music. Students are asked to record themselves online, such as measures 1 to 6, then submit it to the teacher, who plays it back for them in real time and comments on it privately. “In a weird way, Covid taught us how to teach them more digitally. We learned from the things that worked. But I don’t ever want to go back to that,” he said.

There are three other music teachers in the building. Joe Sino, band director who concentrates on piano and music appreciation, also plays an important part with the concert band and percussion ensemble. The choir director is Matt Adams and the choir teacher is Katherine Quay.

All of these changes mean they are collaborating much faster, he said. Now, they are all in one location instead of multiple auditoriums. He said he finds people in the band room practicing every day. “It’s really great.”

DeSantis said the band has advanced in a big way over the past 10 years.

“We took a jump, it was noticeable. We took a jump in numbers and the scores (at competitions) and it was exciting,” he said.

“The administration was wonderful to get us there and rebooking shows that were canceled and rescheduled,” he added. “We don’t overlook the fact that there are a lot of people behind the scenes who really support what we do, and it starts from the top. (Superintendent Tony) Trongone has been really supportive.”

It takes a “perfect storm” of elements for it to happen. We had the “right show for the right kids and everything clicked in the right way,” DeSantis said.

LM Jarvis is currently on staff at Millville High School.