Mom and daughter are advocates for special-needs children and their parents. 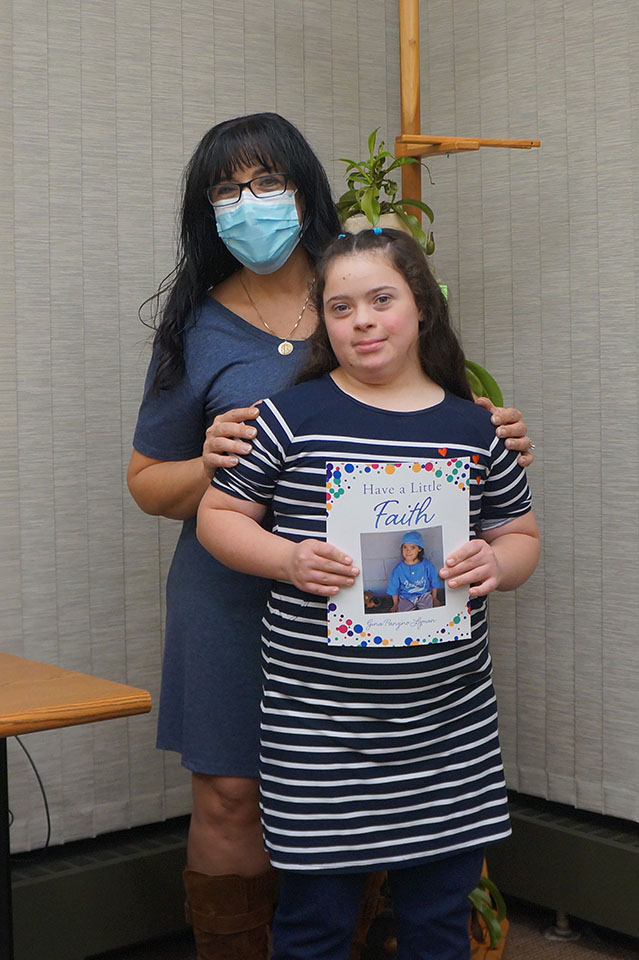 Gina Panzino Lyman and daughter Faith share some of their triumphs and tribulations in newly released book. PHOTO: AHMAD GRAVES-EL
by Ahmad Graves-El

In the past year and a half, SNJ Today has had the unique opportunity and honor of interviewing several first-time authors tackling a variety of subjects, who have ties to Cumberland County.

Among those brand-new authors who graced the pages of this newspaper are Kelly Miletta, the author of Some Bugs I Know, and its companion, Some Bugs I Know Coloring Book; Laura Buonadonna, who co-wrote the Virtual Classroom Survival Guide; and Robert Johnson, who recently released his book, Abandoned Not Broken.

You can add Gina Panzino Lyman to this ever-growing list.

Lyman, who lives in Pitman but has her roots in Vineland, has authored her first book, titled Have a Little Faith. The book shares insights about some of the triumphs and tribulations her daughter Faith has endured being a child with special needs.

Faith is 14 years old and has Down syndrome.

According to an article in kidshealth.org, “Down syndrome (DS), also called Trisomy 21, is a condition in which a person is born with an extra chromosome.

“Chromosomes contain hundreds, or even thousands, of genes,” the article continues. “Genes carry the information that determines your traits (features or characteristics passed on to you from your parents). With Down syndrome, the extra chromosome causes delays in the way a child develops, mentally and physically.”

Lyman speaks candidly about the experiences she and Faith have gone through.

“When I had my daughter … and discovered she had Down syndrome, that was a whole adjustment as a parent,” Lyman reveals. “Once she was starting to get older, I started recognizing different reactions from people. When we would be in a restaurant, or in public, or in the mall … not all the reactions were positive.”

When Lyman, a fifth-grade teacher at Rossi School in Vineland, would mention to her students that her daughter has Down syndrome, she discovered that “it was just really common for students to not know what that meant. And most just had never really met anybody with special needs.”

She sometimes shared some of the activities Faith, who is nonverbal, participated in and got some interesting responses from her students.

“I would talk to them about … all the different things that she does (which included cheerleading and dance) and the kids would get so excited,” Lyman says. “But, they were surprised that she could do those things.”

Faith, who’s a people person at heart, has played on soccer teams, performed on stage at a recital, played baseball in the Challenger League, and more.

“She was always willing and just happy to … be with other kids and, you know, try different things,” says Lyman.

The conversations she had with her students planted the seed in Lyman’s head that it was time for her to get the message out that children with Down syndrome are just like other children.

“She loves baseball,” says Lyman, as Faith is in the background using sign language to agree with her mother’s statement.

“She’s awesome at puzzles. She’s actually been doing 100-piece puzzles for probably a good year now,” Lyman continues. “She loves dancing and music, so she’ll shake the maracas at six in the morning when she’s watching Dora. She just has a ball.”

The book touches on more similarities Faith has with children her age. “She’s 14, so just like every other teenager, she has times where she gets moody and irritable,” Lyman says.

The first-time author openly shares some of the challenges she, as a parent, has gone through raising Faith.

“…[B]ecause she’s nonverbal, I’m a little more alert. So, I will tend to always stop what I’m doing and running [to] go see what she’s doing,” Lyman reveals. “If I hear a noise—because it’s not like she can say ‘Mommy, I need help’—I worry.

“If she’s too too quiet, I worry. And, if she’s making a lot of noise, I wonder what that is too—that can go either way.”

Being an educator along with parenting a child with Down syndrome during a pandemic has become quite a conundrum for Lyman.

“I’m teaching remotely so that’s really hard when you’re in a live Zoom with your fifth graders, and she’s running to the bathroom or she’s upstairs and you heard a crash,” says Lyman. “I have to take care of her, but I also don’t want to abandon my students on Zoom. So that’s challenging.”

Faith, in her short time on this planet, has overcome a multitude of obstacles in her life, starting before her birth.

“As the pregnancy progressed, they discovered one side of her heart, and other organs were enlarging, filling with fluid. They had to perform an emergency procedure, on Faith, while I was still pregnant.”

Faith was in a neonatal intensive care unit for six weeks right after she was born. She had to have open heart surgery when she was five-months old just so she could live. The surgery was a success in more ways than one.

“It was kind of like she was born then,” says Lyman. “And then she just took off from there. It was just leaps and bounds after her heart was fixed.”

Faith’s continual perseverance in the face of adversity was another inspiration for Lyman—who’s aspired to be an author since she was a little girl—to write this book.

“It means the world to me, but especially because it’s my daughter,” says Lyman.

This kind of doom and gloom talk from the medical professionals weighed heavily on Lyman’s mind.

“You teeter on depression because it’s terrifying and no parent wants that for their child,” she says. “I just got to a point where I was not going to allow them to tell me what she was not going to do. I just started getting the mindset that we were going to prove them wrong.

“And she has,” Lyman continues. “She did everything they said she may not do.”

Lyman, who was a dance major at Rowan University before deciding to become teacher, had her first official book signing on November 29, from 2 to 4 p.m., at Words Matter Bookstore in Pitman.

Lyman is excited to be able to share her daughter’s story through Have a Little Faith and hopes the message to never give up is received clearly by all.

“The intention of this is to educate and encourage,” Lyman says. “The purpose was to encourage typical kids and educate them that she’s more like them than they think.

“And to encourage other kids with special needs that they can do what they set their mind to do.”

Have a Little Faith is available for digital download on amazon.com. You can also pre-order the paperback version on amazon.com and barnesandnoble.com