Kissing under the mistletoe tradition dates to winter solstice celebrations, circa 300 A.D. 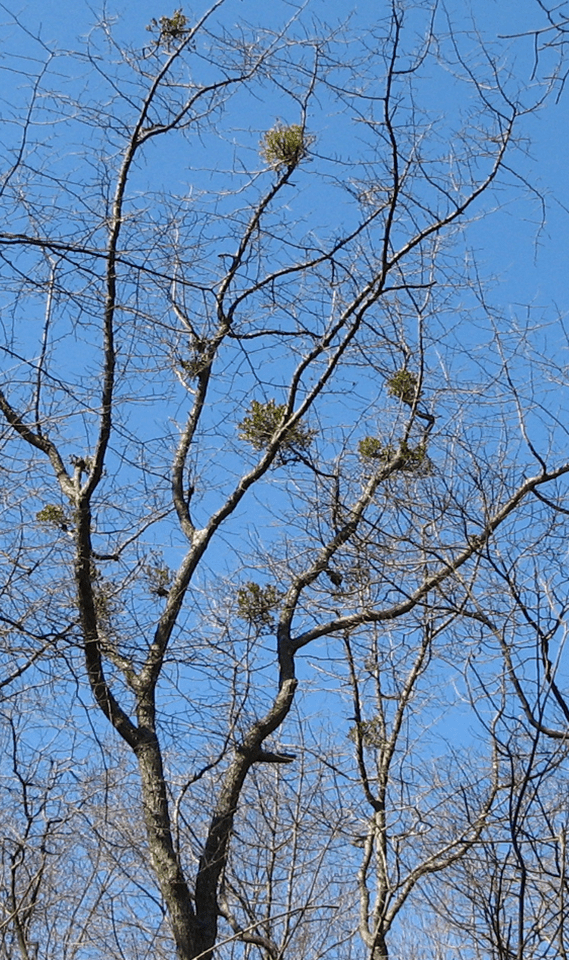 Mistletoe gets its nutrients partly from photosynthesis and partly from the host tree. Thus it is a hemi-parasite. PHOTO: CU Library
by J. Morton Galetto, CU Maurice River

As a child growing up in Cresskill, New Jersey, I lived in a small Cape Cod-style house with two dormer windows. It was a very modest home with a central hallway on the first floor that connected the kitchen, dining room, bath, master bedroom, living room, and cellar doors. To reach most places in the house you had to pass through that hall, and it had a circular feel. In the center there was a Moravian-style star of clear glass with silver trim.

At Christmas this area sparked a massive keep-away game, for from the bottom of the lamp my father would hang a sprig of mistletoe. At that time you could buy live mistletoe, and I remember that as the holiday season wore on it would wilt.

The game began when I was around five years of age; I would dart under the lamp and my father would come out of one of six doorways to grab me for a kiss. My sister and I would race under the lamp’s Christmas decoration and squeal, half-daring and half-avoiding my father’s hug and kiss. Occasionally our parents would steal a more deliberate kiss under the mistletoe to our giggles and protests of “yucky.”

In later years my mother could no longer find mistletoe for sale; it was in fact rare and still is today (Do not cut or collect it in New Jersey!). So we ended up with the plastic variety, possibly manufactured out of a lack of trust that purchasers couldn’t be trusted to eat the product. When the plastic variety came on the scene we were teenagers and the game was no longer “on,” but we would make a point of kissing our father underneath it on Christmas Eve before retiring.

It is thought that the kissing tradition dates back to around 300 A.D., to winter solstice celebrations in Celtic Britain. Druids used the mistletoe in a potion for fertility rites. Such brews were considered to have healing, magical, or even poisonous effects. In fact European mistletoe or Viscum album does have toxic qualities.

Like many toxic plants these properties are often employed for their medicinal effects. American Indians used mistletoe, or Phoradendron leucarpum, for headaches, as an oral contraceptive, and for epilepsy. It was also employed for its abortion-inducing qualities. In modern times some countries have used the European species for tackling cancer, tachycardia, whooping cough, amenorrhea, and for circulatory and respiratory issues.

But allow me to stress that all parts of the plant are poisonous, especially the berries, and consuming them can be fatal. Not to mention that in our area it usually grows in the tops of very tall trees, so collecting it might give you something much greater than the headache you set out to cure. I’m just saying…

The U.S. Department of Agriculture shows its range to be south to Florida, west to New Mexico, then along a mid-line that extends to New York State, and following the coast south again to Florida. One botanist described New Jersey as the northernmost area of its range. But there are some records in New York State; possibly our warming climate may be encouraging a northward spread. Evidently it is more prolific south of New Jersey. I have noticed it when the leaves fall off the trees along the Route 95 corridor in Delaware and Maryland, when its nest-like look is more easily viewed. In our area I have seen it in the Bevan Wildlife Management Area.

It is a hemi-parasite, getting its nutrients from a host tree; with enough mistletoe a tree’s growth can actually be impacted. Although I’ve only seen it growing sparsely in upper branches, evidently that’s not always the case. Mistletoe does carry out photosynthesis so it can make its own food. Only part of its nutritional intake is from parasitism, hence “hemi.” The scientific name of the genus, Phoradendron, comes from the Greek phor or “thief” and dendron “tree”—thus “tree thief.” Mistletoe uses haustoria, or root-like structures, which grow into the stems of the tree to access minerals and water for energy. Oak and red maple trees are common hosts, and in fact one name for the plant is oak mistletoe, but it is not limited to these species. Hackberry, willow, ash, sycamore, cottonwood, and mesquite are other host trees. In our region tupelo (blackgum) is preferred.

Mistletoe’s flowers are an inconspicuous yellowish green, 1-3 mm in diameter. The fruit is white. Birds distribute the seeds when they eat the sticky meat of the fruit and wipe their bills clean on the bark of another possible host, where seed(s) may germinate. It is also spread by their droppings. Bluebirds and cedar waxwings are said to be especially fond of the fruit. Deer and elk can tolerate its toxicity and will forage on it in an emergency.

Reviewing facts about mistletoe has given me some warm memories of my childhood home before I moved to southern New Jersey at 10 years of age. It’s funny how nature and traditions carry associated memories. I had forgotten about the Moravian star light that shone in our hallway with its festive qualities. I think it might be why I’m drawn to Moravian stars at Christmas. Anyway, if you have someone from whom you are not socially distanced, why not hang a sprig of a common plant, and do a little thievery of your own this holiday season?