Muskrats cannot abide extremes in their watery habitat; their numbers plummeted after Hurricane Sandy to the detriment of life on the marshes. 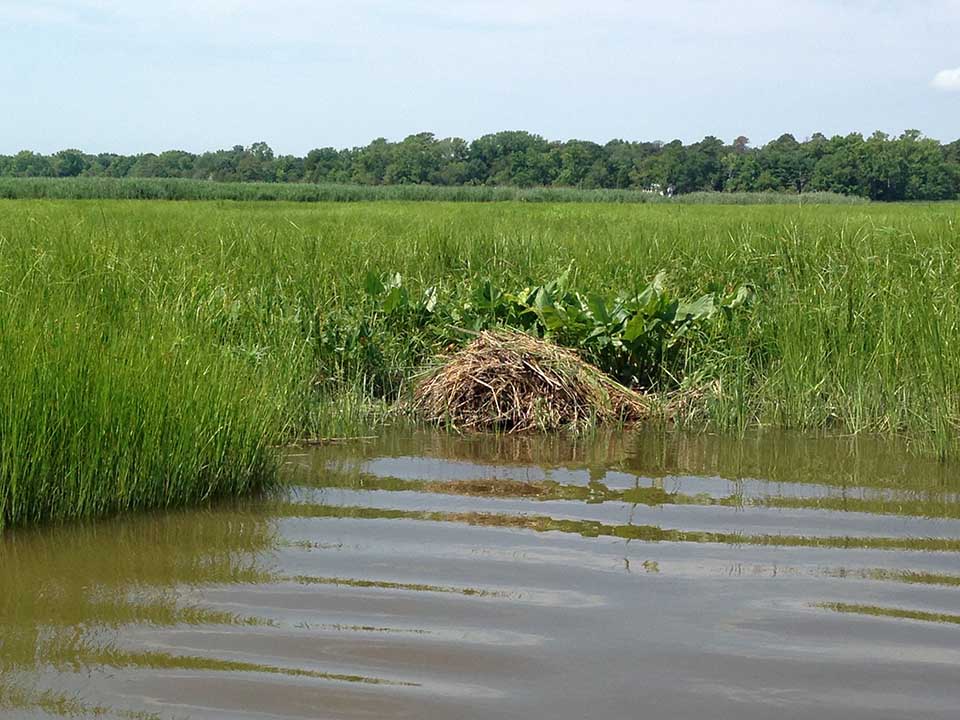 Muskrats build a lodge out of vegetation on the marsh plain. Photo by author.
by J. Morton Galetto, CU Maurice River

In the late 1980s, the last remaining pair of American bald eagles in New Jersey would frequent a vast Maurice River marsh known as Sweet Meadow. They would perch on the tops of muskrat lodges, or “push-ups,” anticipating a meal. I suspect this strategy paid off because they were there so often, especially in early spring as their brood grew in size.

After six consecutive brood failures of this last remaining pair of eagles, state biologists took an egg to Patuxent Wildlife Research Center for artificial incubation in 1989. A plaster egg was left in the nest as a placeholder. This pair, as well as many other top predator species, had thin egg shells from the contaminant DDT that had been retained in the female’s reproductive system. When the chick hatched, the plaster egg was swapped out for the live young.

Biologists also augmented New Jersey’s population with birds from Manitoba, Canada and employed a technique known as hacking. A number of other management practices were used over the ensuing years. Today these recovery efforts, led by the state’s Endangered and Nongame Species Program staff and coupled with volunteer monitors, has New Jersey boasting some 222 active nests (2021). This is an incredible increase from the one remaining nesting pair living in the late 1980s at Bear Swamp.

But not all Bayshore species are doing well. Muskrats were adversely impacted by Hurricane Sandy, as was evidenced by the lack of push-ups for many years after 2012. It always amazes me how we overlook ubiquitous species until we notice a drastic lowering of their numbers. Often species that are the most plentiful are the species upon which many others in the food web rely for sustenance, like the muskrat. Yet they are the least likely to be surveyed until we see a near-disappearance.

Trappers, wildlife biologists, northern harriers, and yes, eagles surely took notice of the decline in marsh rodents long before others. In fact, northern harrier numbers were clearly impacted by the overall reduction in marsh rodents. This year is the first I have anecdotally noticed an increase in muskrat lodges since the superstorm and a period of extreme tides.

Muskrats are adversely affected by both drought and floods. Water needs to be deep enough to provide entrance to the lodge from underneath, but low enough that the den is above the highest tides. Muskrats have an adaptation for diving underwater; their mouths seal shut behind their yellow-colored curved incisors. Observations show them able to stay submerged to bite off plants for 17 minutes before resurfacing. A three-second gulp of air, and down they go again for an additional 10 minutes. These semi-aquatic mammals swim well—but not in swift currents—and their houses must be above the high-tide line. Though they are designed for a watery habitat, extreme tides and persistent poor conditions do not bode well for them.

Furthermore, fish and wildlife departments throughout North America report that muskrats have been on a decline for 50 years. Theories for the widespread declines are linked to increased flooding events, predation, and environmental contamination. One localized study showed most mortalities to be caused by mink predators. Infectious and non-infectious diseases were noted but not clearly linked to the decline. The scientists who conducted this literature review, of 131 studies investigating muskrat population declines, emphasize their importance as a sentinel species for the presence of pathogens, diseases, and environmental contamination to assess aquatic ecosystem health. No clear conclusions could be made from the review of the studies but they will offer a baseline for further research (literature review conducted by L. Ganoe, et al 2020).

Muskrats build feeding platforms in the marsh. They are predominantly plant eaters but also eat small amounts of crayfish, frogs, mollusks, and rarely, fish. They have vegetative preferences and are especially fond of yellow water lily and cattail. Cannibalism is not unheard of in crowded conditions. Muskrats like freshwater, ponds, lakes, swamps, and brackish marshes that provide aquatic grasses and plants.

Habitat loss also plays a role in the decline of muskrats. The persistent advancement of invasive phragmites across local marsh plains crowds them out of preferred marsh habitat. Furthermore, the loss of aquatic vegetation through erosion and herbivory by non-migratory geese depletes the grasses they need to hide from predators, build their lodges, and eat. Prior to year-round geese destroying the marsh plain near our home on the Maurice River, we often spotted muskrats in the watery guts. They were so plentiful that at one point they grazed on the grasses in our yard. But the geese tore out the wild rice by the roots, leaving the muskrats without food or shelter.

Muskrats are crepuscular, mostly active at dawn, dusk, and in the night hours. Their large back semi-webbed feet allow them to paddle both forward and backward, and a flat scaly tail serves as a rudder. The tail is vertically flattened along its length. The body is about 8 to 10 inches long and the tail about 7 to 12, and they weigh in between two and four pounds.

Their pelage is waterproof and traps air for insulation. Like beaver, mink and otter, they have a mix of guard hair and a shorter, finer undercoat. When fur was in fashion trappers sought them. Their fur has been valued for its supple nature, the rich chocolaty color of the back, and the variation caused by the gray underbelly.

Along the Delaware Bayshore’s creeks and wetlands, the mounds of grass you see are often muskrat lodges. These are generally three feet high, above the waterline, and adjacent to a gut for water access from below. Each represents the terminal nesting chamber for a litter of kits. Nesting begins mid-February or early March and extends through the summer into September. Gestation is about three and a half weeks and they can have up to five litters a year. The mother will breed while still nursing and drive off a litter when it is a month old, to make room for the next brood. Males will help build the lodge but sources differ on whether they leave when the young are born or remain as part of a family unit.

At the height of breeding season, in the latter part of March, male muskrats compete with vigor, often leaving a rival male with injuries or occasionally dead. What leads up to muskrat coupling is not the charming scenario warbled by The Captain and Tennille in their sappy song “Muskrat Love.” I will, however, mention that muskrats do mark their territory with their musk and it is said to be sweet smelling when diluted. In fact, it has long been an ingredient in some expensive perfumes. Next time someone says, “I smell a rat,” you may want to give some thought to which perfume you chose to apply that day!

Litters consist of between one and 11 young, and a mother produces an average of 35 young during breeding season. The earliest litters’ females are capable of breeding by the end of summer, and in instances where early litters were especially productive a marsh can have an abundance of rats by the fall. This will result in a certain number of them being displaced to marshes as much as a mile or two away. Twenty rats per acre is not unheard of, at least, presumably, in 1989.

Rodents and other animals with large numbers of offspring and low parental investment per litter are said to be r-selection strategy breeders. These animals are basically born to die—in other words, “dinner.” If they are in short supply it can have a domino effect, impacting top predators who rely on them for sustenance. Mink, racoons, coyotes, foxes, bobcats, snakes, and raptors are among those who use muskrat as an important food source.

In southern New Jersey a number of organizations used to have muskrat dinners. As fare in some places they are referred to as marsh rabbit; I assume that makes them sound more delectable to the ear but it makes little difference to the palate. Lower Alloway Creek Fire Department and Ladies Auxiliary in Salem Co. held the most famous of the dinners. Traditionally, fried muskrat was served with sides of pickled beets, potato salad, green beans, biscuits, and cabbage. Around 2019 they cancelled the 80th annual event due to a lack of muskrat meat; ice had prevented trappers from catching them.

I tried to cook some muskrat about 25 years ago with some frozen meat that I purchased in Bridgeton. Consider yourself lucky to have missed supper; evidently I just didn’t have the touch. How does it taste? Done correctly, like beef I’m told. But how it tastes to us is of little consequence to the wildlife missing muskrat from its diet. The causes of the muskrat’s decline remain elusive but let’s hope that they have a recovery of the same magnitude as our nation’s symbol, the bald eagle.

Tom Brown was a trapper from Millville, NJ. His biography has been the subject of a number of Pineland Folklife projects, and he was one of the original Board members of CU Maurice River in the mid-’80s. He augmented his larder and made ends meet by living off the land. In his later years he had a small museum in his backyard that he shared with local school children, to allow them to explore the lifestyle of early Americans. Part of Tom’s ancestry was native American and he loved to recite his poems about the nature that he both appreciated and harvested.