Storm clouds gather as local Ukrainians share their grief and worries for a war-torn homeland, their loved ones—and for democracy. 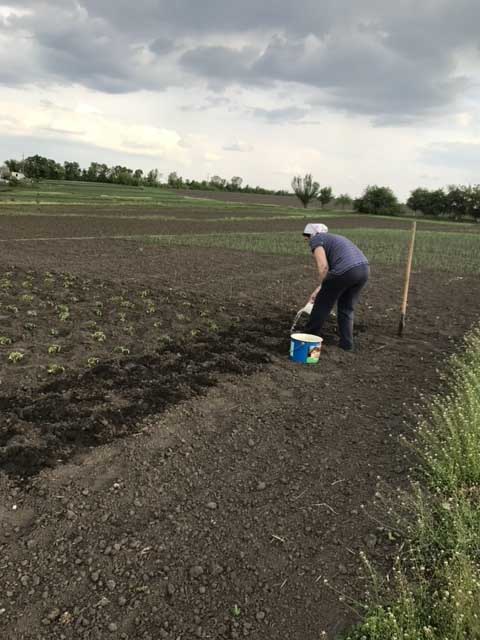 Llona Tsyganyuk waits until midnight to crawl into bed, her head crowded with fear. At 12 a.m. in Vineland, it’s 7 a.m. in Ukraine: Morning. Time to click on a family cyberchat: A few words of encouragement, Bible verses, loving support from a distance. Then, a quick update from the news, and she can finally sleep.

The 33-year-old mother of three has dozens of family members in Ukraine war zones, where buildings are routinely bombed, and Russian soldiers lie dead in the streets.

Five weeks into Vladimir Putin’s war on her homeland, grief, anxiety, and worry are part of her routine, accompanied by a steady stream of grim TV news reports.

It’s been like this since February 24, the date Putin invaded her home country.

“I read the news every day, all day, but sometimes my mind goes to the worst. I get so upset, depressed, angry, all those emotions,” said Tsyganyuk, who works at Inspira. “I have to give myself a day off from the news because I have kids and I need to be sane for them.”

A prayer for Raisa

Her biggest fears are for Raisa Smolana, her 90-year-old grandmother, who lives alone and refused offers to help her leave her high-rise apartment in a town about 50 miles from Kyiv.

Friends of her brother were going to check on her and help her make it to a nearby country.

“My grandmother says she’s too old and not able to travel that far,” said Tsyganyuk. “She said she’s going to take what God gives her.”

Raisa has gone to a makeshift bomb shelter in the basement of the high-rise building where she stays, but it was a cold, painful experience. She tells stories of surviving World War II through which there were horrific food shortages and some people resorted to eating pets, and worse. She even survived a surgery without anesthesia when she developed appendicitis. “She was fully awake and aware,” her granddaughter said.

“My family feels more than heartbreak, but it’s worse, because you are not going through this (with them) and you cannot help them,” she said.

Some things, reporters cannot show you with their cameras.

Some things, unspeakable things, are happening in the streets of Kyiv and elsewhere, then are trickling back in reports.

Tsyganyuk is hearing and reading these reports, and the sense of outrage rises in her voice as she repeats them.

“Just today, I read that (dead) Russian soldiers are out on the streets, not being picked up,” with packs of wild, stray, hungry dogs lurking near them.

“People are not used to seeing the real stuff because it’s not pleasant to look at,” she said. “We see the gory stuff, from people posting on the Internet.”

“It’s just terrible,” she said. “We see pictures of civilians being thrown into ditches and buried in mass graves. They are doing the best they can to bury them, so they are not left on the streets to rot.”

Right now, she hopes people reading this will lift her country, her family, her friends in prayer.

“There really isn’t a whole lot you can do. This war looks like it’s going to last, so we are thinking of ways we can help.”

They hear stories about people they know back home. A husband leaves the house to get something for his family and goes missing for six days. “They found his body. It was laying (on the street) for six days.”

People don’t know if their sons and fathers are even alive, she said. Gas is in short supply, with food and basics dwindling. To make the journey to get more gas means burning what little you have, and often people are returning empty-handed.

“Right now, I don’t think there’s anything I can do. If I didn’t have children, I would be there,” she said. “A lot of people can’t flee; they don’t have anywhere to go.”

Despite the shelling and the daily horrors, Tsyganyuk’s sister-in-law Olga elected to stay behind in Kyiv.

“She’s scared, she doesn’t know where to go,” Tsyganyuk said. “She has two dogs, big dogs, and two cats.”

Tsyganyuk’s husband Maksim told them to let the animals go or put them to sleep, something her sister-in-law refuses to do. There is no one there who will feed them, she told her family.

“She said, ‘I cannot look them in the eye and do this.’ So, she’s there for the animals,” Llona said.

Tsyganyuk feels a little salty toward politicians and businessmen who made money in Ukraine, telling the country they would fight Putin and for democracy in Ukraine. “But when the time comes and the country needs help, no one wants to jeopardize their own skin. No one wants to do it because they feel it could play out negatively.”

She has doubts about where all the support money flowing in from around the world will go, and hopes it ends up in the right hands.

“Is there anybody checking where this is going to? From what I’ve seen, people who need it the most get the least,” she said.

For now, expect Ukrainians to fight to the last man, she said.

“The Ukrainian people see how controlled the Russian people are and that’s not what they want. They are for democracy. They don’t want to be anyone’s sheep,” she said.

Orphaned children are among the crisis points that are making the news. Thousands of children are being orphaned daily around Ukraine, according to UNICEF spokesman James Elder. “Every day in Ukraine from the start of the war, more than 75,000 children have become refugees. Every day,” he said in online reports.

There were plenty of orphans before the war, said Tsyganyuk.

“Now, there are orphans because of the war, and women who are leaving children and fleeing.”

Tsyganyuk and her husband’s children are 14, 11 and 5. She would gladly take in some of the orphaned Ukraine children.

For now, Tsyganyuk can only keep up with the news, check the cyberchat and watch the Ring video cameras they have outside their home. “So, I look at those, and look at the first morning news to make sure the capital is still there. When I see that it’s still intact, I can fall asleep because otherwise I am worried.”

From Vineland to Sumy

When tanks began rolling into their home country, members of the Slavic Evangelical Baptist Church, 5337 E. Chestnut Avenue, had to do something, anything.

The church raised $3,000 by making both sweet and savory danishes for $3 each, with all proceeds headed to a sister church in Ukraine to spend as they see fit on food, clothes, or other basic supplies.

The danishes, stuffed with a choice of cabbage and sauerkraut, sweet farmer’s cheese, poppyseed, chicken, cherry, or apple, sold out quickly. Thirteen women from the church made them all by hand, working till the early hours alongside Vineland resident Alena Broshchan and her parents to assemble all the orders and clean the church kitchen.

Broshchan said the money will be sent to a church in Sumy, which is near the Russian border. “Anything that can help them morally or physically, to stay a little bit calm,” she said.

Her parents split their time between Vineland and Sumy and were in the U.S. when the fighting broke out. Broshchan grew up in Sumy, traveling there with her family every summer. Later, she took her own children.

It’s a small town, she said, dotted with monasteries and churches. It’s a town of flowers on every corner, cobblestone streets, bakeries, and fountains.

“It’s gorgeous. You wouldn’t think it was in a small country of Ukraine,” she said.

Today, the picture postcard town is under fire, buildings are bombed, the sound of sirens wailing. Her family told her they could go a day or more with no sirens, and then they start up again.

“People are tired of running to the basement and hiding,” she said.

The pain felt in her homeland gives her a certain perspective on life in the U.S.

“People in this country don’t know how blessed they are,” she said. “They under-appreciate what they have here.”

In Sumy, gardens are a way of life, and nearly every family has their own plot. Those gardens are a lifeline now, providing fresh food in a time of scarcity.

“People there live in their gardens. They are committed to where they are,” she said, adding it’s another reason they do not want to leave.

Broshchan also hopes readers will keep her country in prayer.

“We as humans can only do so much. Everything else is up to God. I’m praying about my family,” she said.