Evergreens tide us over from fall to spring with the color of summer. 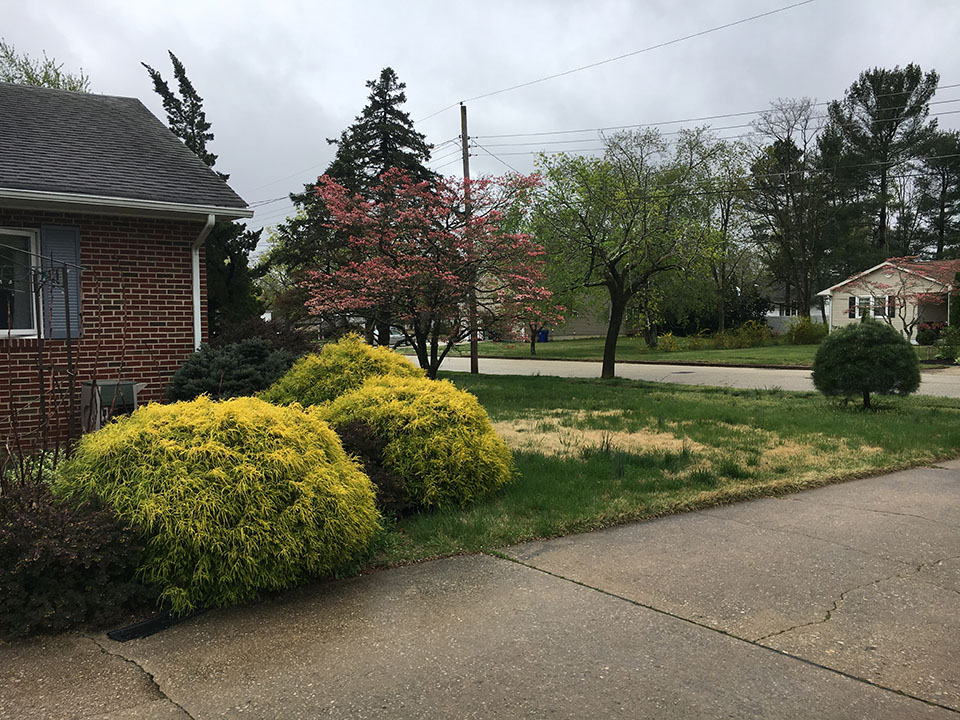 Photo taken on a gray day in spring but last of three Norway spruces is just beyond the flowering dogwood. Replacement white pine is at right.
by Deborah Boerner Ein, Editor

When our family moved across town to a new home a few years ago, we inherited three towering Norway spruce trees in our front yard. Our new neighbors eventually divulged to us that if we hadn’t bid on the house so quickly, the sellers would have had the trees cut down to increase curb appeal. As if the trees were a detriment, a liability, a deal breaker. They had no idea who was moving in.

Long after the deciduous trees and shrubs lose their leaves each autumn, long after our zoysia-grass yellows for the winter, our tall evergreens fill our landscape and our days with the healing color. The trees offer the only shade from a southern exposure, so in summer the cars get parked on that part of the driveway and yard sales migrate to the shade of the trees. The trees have marked the school bus stop, been a backdrop to our Christmas cards, brightened our winter days, and tided us over from fall to spring with the color of summer.

We have heard that the trees were lovingly planted by Bea, the former lady of the house, and may have been potted Christmas trees from various years, probably going back some 35 years or more. Each of our three children immediately adopted a tree, and once we pruned off some of the lower branches, the trees became their “clubhouses.” They would invite each other over and spend hours playing make-believe. We have lots of boys in our neighborhood, so the trees have become the place to go on the block for climbing.

Any time my husband or the neighbors suggested cutting the trees down to better show off the front of the house (other arguments—to open a line of sight up the street, to improve air flow and breezes, to have more lawn), I couldn’t imagine our yard without the clubhouses, without the ever-green in the winter landscape. So I hedged. When I took a landscape design class, the final project was to redesign our own yards. In my plan, the three trees were there to stay, and I designed around them. I focused on removing a holly tree close to the front door (an obvious case of the wrong tree in the wrong spot) and replacing it with a patio fronted by a specimen birch, its trunk trained in a curve, and surrounded by alternating red-leaf barberry and gold thread cypress. The following spring, that plan came to fruition.

A few months later, we hired an arborist to take down a huge elm in our side yard. Its heavy, lopsided branches were precariously hanging over the roof. In order to get to the tree with the bucket truck, the arborist had to come through the front yard, and taking down one of the spruces was discussed. I relented, and chose the middle tree, the smallest of the three, which was maybe too close to a maple in the street lawn in front of it. Plus, taking this one down would show off the landscaping along the brick-faced front of the house.

Well, soon after, the taller of the two remaining spruces turned yellow, then brown at the top. The browning has slowly progressed down the tree, and it’s now green less than halfway up. The cause could have been drought or lack of nutrients or too much salt from deicing the roadway in winter, but I’m guessing it’s dying of old age. Thirty-plus years is a good long life for a Christmas tree.

When the first tree/clubhouse came down, it was missed, but my twin boys “moved in together” and shared one clubhouse. With my daughter being older now, she will give up her clubhouse with the felling of the next tree. That leaves just one Norway spruce in our front yard, the best one for climbing. Still, it’s hard to envision that large spot in our yard without the tallest evergreen. It will be an empty canvas…but I plan to paint it green.

Update: This column is reprinted from a previous “Gleanings” in The Grapevine, and was originally titled “The Three Spruces.” Since then, my daughter helped replace her tree with a white pine that she grew from a seedling while in middle school.

Within the past year, the third and final spruce—the climber tree—has declined. The electric company has just cut away the branches that were in conflict with electric wires.

Spring is just around the corner, time to plant another evergreen or two.