The love and respect the community exhibited for our veterans opened the eyes of many to the struggles and challenges our servicemen faced. 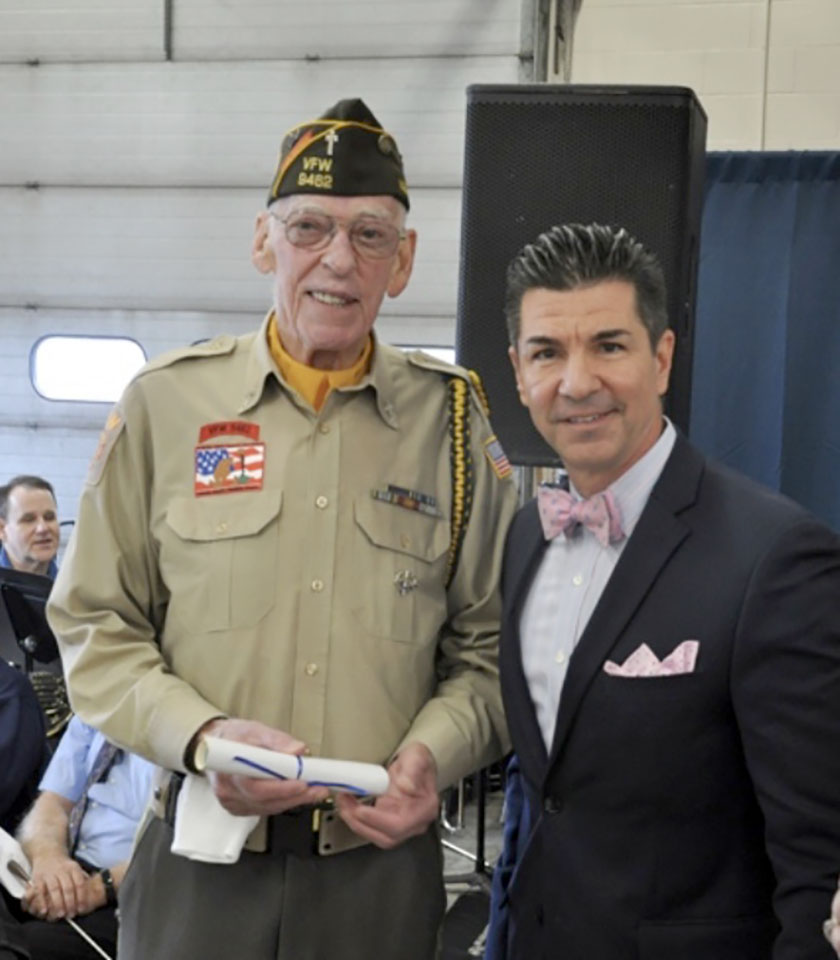 They leave behind their homes and loved ones. They leave behind relationships formed over lifetimes and work that took years of their time and effort. They leave behind the safety and comfort of their world, and they run headlong into uncertainty and difficulty—challenges impossible to plan for and risks too great to imagine. They reshape how they think and rebuild themselves to serve a dangerous purpose. After all that, they then return to what was once their lives. Lives that continued without them, and they have to learn how to exist all over again. Many of them with new physical limitations they didn’t have before. Many with scars so deep you can’t see them on the surface, mourning brothers lost and duties no longer fulfilled. They are our veterans, and their sacrifices are beyond understanding unless you’ve walked in their shoes. The debts owed to them are impossible to repay, but the Borough of Buena, NJ is doing its best to show them the appreciation they deserve.

Mayor David Zappariello wanted to create something memorable for the veterans of his community, so he, the Buena Borough Council, and the Recreation Committee came together to bring the Moving Wall to their town.

Katrina D’Alessandro, coordinator of The Moving Wall, said, “The idea of bringing the Moving Wall to Buena Borough brought a lot of energy to our community. Everyone was on board with doing this. It was an amazing way to honor our Vietnam veterans and the fallen.” The Moving Wall stands six feet at the center and stretches for 300 feet from end to end, a half-sized replica of the Washington DC memorial. Just like the original, it bears the names of more than 58,000 servicemen and women who made the ultimate sacrifice. It’s been traveling the country for over 35 years, allowing those who can’t make it to DC to share the emotional experience and pay their respects.

Mayor Zappariello said of the occasion, “This is a once in a lifetime experience. It will be a moment of immense pride and an opportunity to show our support as a community to those veterans who have sacrificed so much.”

What normally would take a year of planning had to be done in only a few months, and volunteers worked around the clock to accomplish the momentous task. The weather was cold and rainy, but the dedication of the volunteers kept them going, some for more than 18 hours at a time. Mayor Zappariello and D’Alessandro were moved by the commitment of their fellow Buena citizens.

“I could not do any of this alone. So I need these people to know how much they are appreciated,” D’Alessandro said, sharing her heartfelt thanks to those involved.

On October 3, 2019 more than one veterans group escorted the Moving Wall to the corner of Central Avenue and Southwest Boulevard in Minotola. The opening ceremony featured keynote speaker Senator Chris Brown and Department of Defense speaker, Colonel Rick Kiernan, who is retired from the US Army. The Wall stayed for five days, giving residents ample opportunity to share in the experience. Local veterans were able to come together to remember and discuss their pasts with others who could understand, and the entire community was united in honoring those who gave their all for this country.

The ceremony’s high point was when commemorative lapel pins were presented to all the Vietnam veterans in attendance. Men who had suffered the horrors of the war and returned to find aggression and abuse from many were able to stand up and accept a small sign of the tremendous gratitude they were long due.

Tears were shed and smiles were broad as those pins were worn like the medals many of them earned. The celebration ended as the Coast Guard Honor Guards and the Marine Honor Guard from Last Salute performed a full memorial service, cementing the day’s events in the memories and hearts of all who were there.

About a month after the Moving Wall stirred the hearts of Buena Borough, a Veterans Day celebration was held on November 9, 2019. It was a heartfelt celebration, inviting all veterans to be recognized for their sacrifice and service. A band from Rowan College played each military branch’s service song and a barbershop quartet sang the National Anthem and provided entertainment while the veterans and their spouses enjoyed a steak dinner and everyone else was served a delicious hamburger meal.

The sense of comradery was everywhere as veterans who had attended the Moving Wall were once again united to further the bonds formed by shared experiences. The Knights of Columbus proudly presented the colors and the attendees were addressed by keynote speaker Sargent at Arms Chuck Knutson, a retired U.S. Naval officer Robert E. McNulty, Sr., and Marco Polo Smigliani who has received four purple hearts and is now a veterans advocate. Tables of memorabilia, mostly provided by Sargent Knutson’s team, brought to life the stories and memories of what our veterans lived through.

The overwhelming support that made these two events possible was astounding as so many donated their time and money. It became clear to everyone how important our veterans are to the people of the Borough of Buena. The love and respect the community exhibited for our veterans opened the eyes of many to the struggles and challenges our servicemen faced.

Mayor Zappariello’s gratitude to all those who stepped forward to help is immeasurable. He has made a commitment to the citizens that he, the Buena Borough Council, and the Recreation Committee will continue to coordinate events like these. They already plan on two more events for this year, an outdoor one in the spring and another Veterans Day celebration in November. Details of these events will be made known on buenaboro.org when the final dates are set.