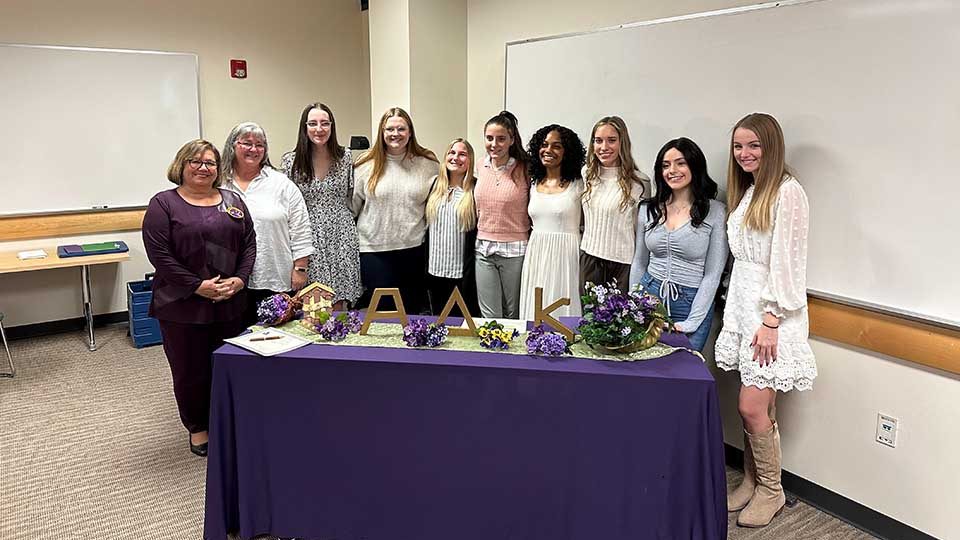 These lifelong educators were inducted into Alpha Delta Kappa, an international honorary organization that recognizes educational excellence, promotes world understanding, and altruism. The two have been active members for many years, serving in various roles, including president, within their chapters.

After their presentation, Ingersoll nudged Mazzei and said “We need to do this at Rowan. With your connections there we should be able to establish a club there.” Mazzei had worked at the university for a few years and currently serves on the Alumni Board of Directors. She contacted Rowan professor, Dr. Cori Meredith Brown, who was delighted with the idea, and together they began the process of building interest with potential students who could be the foundation of this exciting new Alpha Delta Kappa Collegiate Club.

After years of planning, Ingersoll’s and Mazzei’s dream became a reality. Nothing was going to stop this dream, not even a worldwide pandemic.

On December 14, 2022, Rowan’s Alpha Delta Kappa Collegiate Club was chartered and its first officers were installed. Alexis Davis and Rachel Campbell were installed as co-presidents and Emma Avis was installed as vice-president. Dynamic, dedicated, and passionate, these young women are ready to create positive changes in their respective fields of education.

Campbell, a double major in special education/early education and psychology is most excited about the mentoring the new club will receive from established Alpha Delta Kappa chapter members.

“I just really like the idea of mentoring because a lot of us are not familiar with school districts,” she says.

Davis, an inclusive education major, hopes to “create that sisterhood, that community that a lot of times we don’t have in the field of education.”

Avis, a junior inclusive education major, sees her role as a way to further opportunities for women. She looks forward to this new Club as a way for her sisters in Alpha Delta Kappa to celebrate what they love to do most. The energy of these young women was magnetic. Their shared passion for education, coupled with their diverse personal interests, are the perfect combination for a successful new venture.

Add to the incredible mix of young women, a faculty advisor who exudes enthusiasm, love, and dedication to her craft, and you have the perfect foundation for success. Dr. Cori Brown, the group’s faculty advisor, is a dynamic leader with great vision for her group. Her joy is evident from the moment you meet her. The Club couldn’t have found a more perfect advisor.

The first in New Jersey and the sixth internationally, Rowan University’s Alpha Delta Kappa Collegiate Club is now the standard bearer for other universities and colleges.