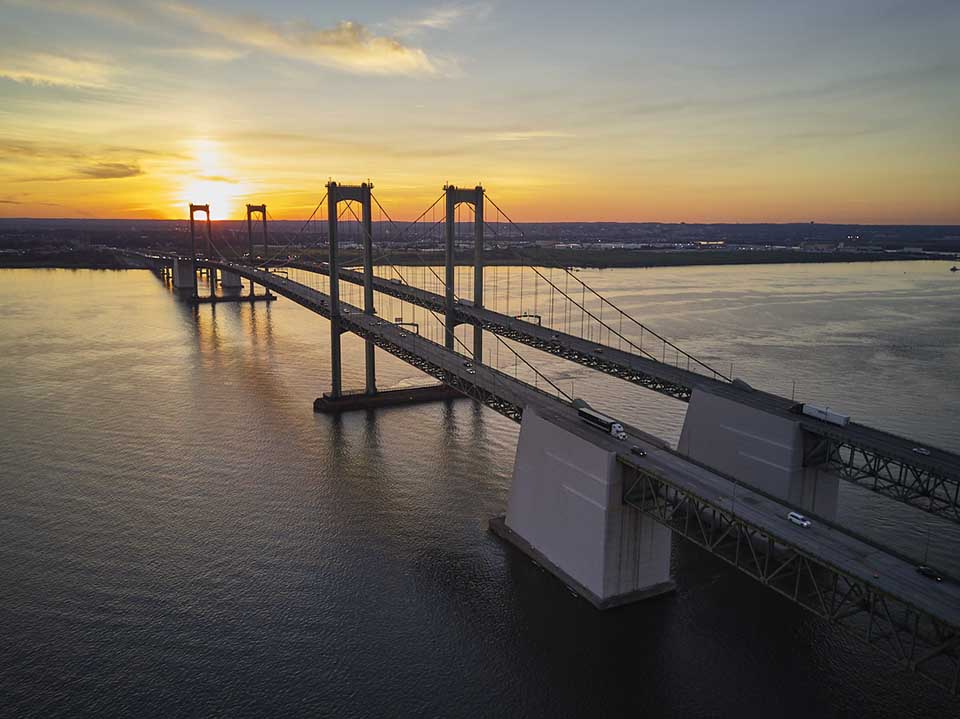 Delaware River and Bay Authority (DRBA) officials announced that phase one of a major construction project to rehabilitate the bridge deck (driving surface) of the New Jersey bound span of the Delaware Memorial Bridge (DMB) is now underway. Two right lanes of the northbound span will be continuously closed until just before the Thanksgiving holiday period. The bypass lane for northbound traffic on the Delaware bound span is now open.

Phase 1 will take place in the two right lanes of the New Jersey bound span, west of suspended bridge midpoint (“Delaware side”) through November 22. Construction activity associated with this project will be suspended during the winter months and the peak summer travel season.

To accommodate anticipated traffic volumes, a bypass lane has been established to divert some traffic around the construction zone. This bypass lane, which channels traffic to the exterior lane of the Delaware bound span, is recommended for passenger cars bound for the New Jersey Turnpike only. Commercial vehicles are not permitted to use the bypass lane. The remaining three lanes of the Delaware bound span will be open for southbound traffic.

While the project has been designed to minimize traffic delays to the extent possible, motorists may encounter them, particularly during rush hour time periods and peak weekend travel times. Commuters and travelers are urged to stay alert and obey all posted speed limit signs. For the latest in traffic information and project updates, follow the Bridge on Twitter @demembridge or sign up for text alerts at bridgealerts.com.

A bridge deck study conducted on the New Jersey bound structure noted that the bridge deck was exhibiting accelerated deterioration and required substantial repair. Partial depth deck reconstruction utilizing UHPC technology has been identified as the most effective solution.

In March 2022, the DRBA contracted with UHPC Solutions North America LLC of Orange, NJ, to undertake the deck overlay project on the New Jersey-bound Span of the DMB. The three-phase project, which will cost approximately $71 million, is expected to be completed in November 2023.

Hoppenjans added that a full deck replacement, the only viable alternative identified, is significantly more expensive, takes longer to construct, and is much more disruptive to traffic in comparison to the UHPC deck overlay process. For more information, visit drba.net.