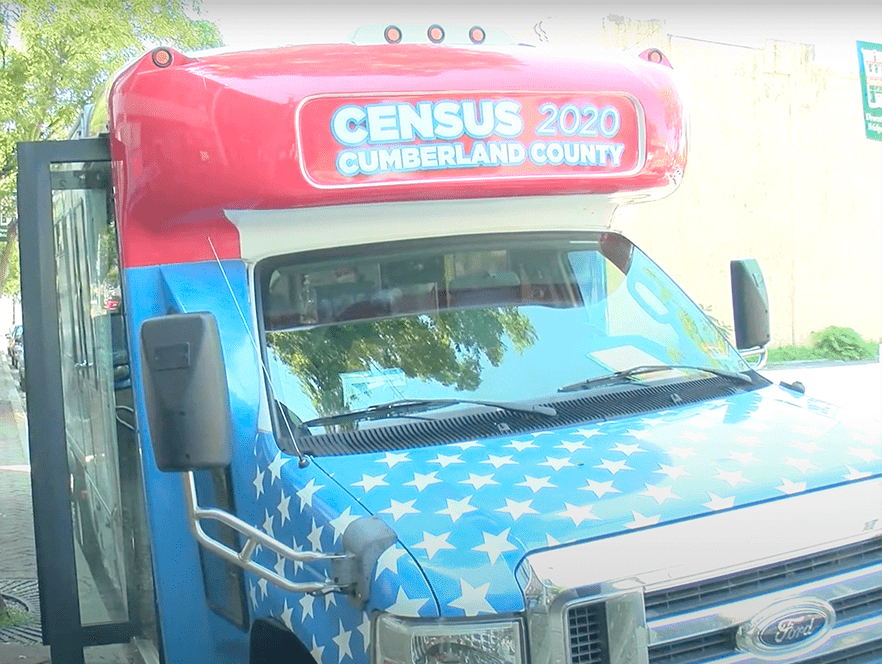 The census takers are coming soon to a block near you. And to yours.

Last week, the U.S. Census Bureau began its follow up information gathering in Cumberland County as part of its nationwide effort to visit households that have not yet responded to the 2020 Census.

Based on the current U.S. self-response rate of 63.3 percent, the Census Bureau estimates it will need to visit about 56 million addresses to collect responses in person. Up to 500,000 census takers across the country will go door-to-door to assist people in responding.

“America has answered the call and most households responded to the census online, by phone or by mail,” said Census Bureau Director Dr. Steven Dillingham. “To ensure a complete and accurate count, we must now go door-to-door to count all of the households we have not heard back from. During this phase, you can still self-respond online (at 2020census.gov), by phone (at 844-330-2020), or by mailing your completed questionnaire.”

About 150 workers are already trained and authorized to be census takers locally and most work in and near their own neighborhoods.

“Recruiting in Cumberland County was great,” said Jeff T. Behler, New York regional director for the U.S. Census Bureau. “We exceeded our goal in hires and we are still recruiting and training.”

New Jersey Secretary of State Tahesha Way, the head of the state Complete Count Commission, reported last week at a virtual town hall led by Gov. Phil Murphy that the state self-response rate stands at 65.4 per cent, ahead of the national average.


At Your Doorstep: 2020 Census and Safety

In carrying out their respective missions, the U.S. Census Bureau and the Centers for Disease Control and Prevention (CDC) are committed to protecting the health and safety of all employees and residents.

• Wearing of facemasks.
• Maintaining social distance of six feet or more.
• Practicing hand hygiene.
• Not entering homes by conducting interviews outside as much as possible or practical.

Household members encountered by census staff are encouraged to maintain social distance during interviews and practice the CDC’s other recommendations.

Residents are asked to wear masks, but it is not required. If a resident needs and wants a mask, the census taker will provide a complimentary, sealed five-mask pack both for safety and to show appreciation for completing the census. If the respondent remains hesitant to talk in person, the canvasser will ask for a phone number and return to their car to call and complete the questionnaire, according to Jeff T. Behler, New York regional director for the U.S. Census Bureau.

“We like to get the information while the body is in front of us,” he said.

This year is the first time the census has been available online in addition to mail and 53 percent of the surveys in New Jersey have been filed that way.

Cumberland County’s self-response rate has reached 62.8 percent as of August 13, according to census records provided by Kevin C. Rabago, Sr., business administrator for the City of Bridgeton This leaves about 16,000 occupied housing units (OHU) for non-responsive follow up (NRFU) in census jargon. A disproportionate number of these are in areas termed “low response,” primarily poor and minority neighborhoods.

In 2010, the final Cumberland County self-response rate was 66.8 percent and the state rate was 67.6 percent.

The U.S. Constitution mandates a census of the population every 10 years. It is far more than a number tally and instead has significant political and economic effects. Apportionment of seats in the U.S. House of Representatives is based on the census count; in fact, New Jersey had 15 representatives before 1980 and then lost one in each census except in 2000, so now has 12. (This usually occurs as a result of relative population densities and not necessarily fewer persons.)

More important is that responses from the 2020 census help determine where more than $45 billon in annual federal funds to the state goes to help with community support and improvement.

Funding over the next decade in areas like transportation, road construction, career and technical programs, Pell Grants, public and private schools and colleges, wildlife restoration, environmental protection, historic preservation, small business assistance, senior housing, green spaces, law enforcement and emergency response, and safety net programs like Medicaid, SNAP, and social services for the disadvantaged are all linked to census data, according to Rabago.

At the town hall, Murphy made a sustained plea for participation in the census process.

“We know we were undercounted in 2010,” he said. “We can’t let that happen again because it cost us untold billions of dollars in the decade.”

Way pointed out a unique census factor at this critical time.

“COVID-19, for example, shows what the impact of the census results can be—the number of hospital beds available and the number of first responders deployed are partially determined by the count,” she said.

Since the safety net programs tied to the census count benefits poor and minority households more than others, most observers believe it is especially important that these areas be fully tallied, despite their handicaps of being hard-to-count and having a depressed self-response rate.

If our county and state end up undercounted, it won’t be for lack of trying. Complete Count organizations were launched nationwide last year to help educate the public of the importance of the census and promote participation, especially among hard-to-count populations. The local committee has held about 20 outreach events just since July 24 and has another dozen scheduled, all to increase census participation. The “Census Bus” gathers self-responses as it appears at events and travels throughout the county.

The festive and informative outdoor gatherings have ranged from a barbecue hosted by Gateway CAP in Bridgeton to youth basketball games in Fairfield Township to a community yard sale and shredding event in Downe Township. A mobile billboard promoting census response regularly tours the county.

“Local leaders like those in Cumberland County are our trusted partners,” said Behler. “Folks respond better to their pastors, community service leaders, and restaurant owners, for example, than they do to people they don’t know. The reason New Jersey is where it is in response rate is the work of our partners.”

Bridgeton Mayor Albert B. Kelly, a prominent and insistent voice in Complete Count since mid-2019, summed up the stakes in a recent SNJ Today newspaper column.

“It is critically important that all residents respond to the census,” he wrote. “How much of the federal pie we get and how many resources are made available to us for key projects here in Cumberland County over the next 10 years will largely be decided in the next few weeks.”

For more information and to apply for a local census job, go to 2020census.gov.

In most cases, census workers will make up to six attempts at each housing unit address (HUA) to count possible residents. This includes leaving notification of the attempted visit on the door. The notification includes reminder information on how to respond online, by mail, or on the phone.

“We always get a bump in self-responses by leaving the information,” said Jeff T. Behler, New York regional director for the U.S. Census Bureau.

After exhausting their efforts to do an in-person interview with a resident of an occupied housing unit, workers seek out proxy sources—a neighbor, a rental agent, a building manager or some other knowledgeable person familiar with the housing unit—to obtain as much basic information about the occupants as they can.

In order to minimize the need to send census takers to households in person, the Census Bureau is training workers to follow up by phone. Using information provided to the Census Bureau and third-party purchased data, the bureau has a strong contact list for both landlines and cell phones assigned to houses on the Census Bureau’s address list.

A valid government ID badge with their name, photograph, a U.S. Department of Commerce watermark, and an expiration date on it can easily identify census employees. They will have an official bag and an electronic device, such as a laptop or smart phone, bearing the Census Bureau logo. Census takers will conduct their work between the hours of 9 a.m. and 9 p.m.

The best way to avoid being visited at home by a census enumerator is to complete the 2020 Census online, by phone, or by mail.

Census information is guaranteed confidential by law (Chapter 13 of the U.S. Code.) and identifiable data, including immigration status, cannot be shared or released in any form.

Note that census takers report to their local Regional Census Centers. Please contact your regional center if you have questions about the 2020 Census or local census takers. The number for our area is 212-584-3400.