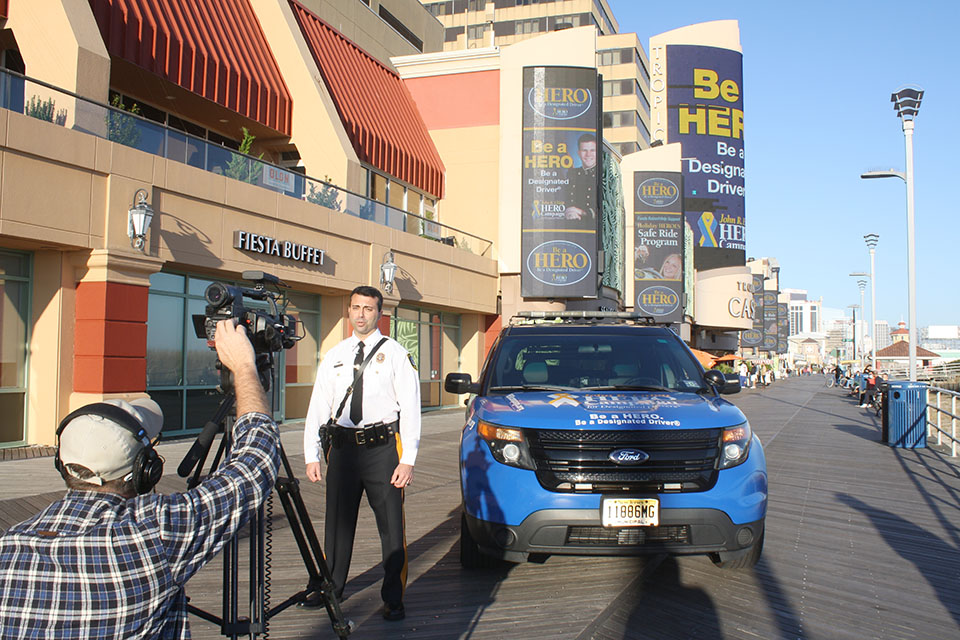 The airtime on the digital network was recently donated to the John R. Elliott HERO Campaign by Meet AC, the sales and marketing authority for the Atlantic City Convention Center. In the video, Sarkos delivered the HERO Campaign’s message encouraging Boardwalk visitors to avoid drinking and driving by using designated drivers.

“We are very grateful to Larry Sieg and Meet AC for donating the airtime for our message on the Impactivate video screens,” said HERO Campaign Chairman Bill Elliott. “The video billboards are a great vehicle for our message: ‘Be a HERO. Be a Designated Driver.’ We also want to thank Jim Sarkos for delivering the message, and the management of Tropicana Casino Resort, who included the HERO message on their giant video screens as a perfect backdrop.”

The HERO Campaign was established by the family of Navy Ensign John R. Elliott of Egg Harbor Township, NJ, who was killed in a July 2000 collision with a drunk driver two months after graduating from the U.S. Naval Academy. The Campaign is now saving lives in seven states in partnership with law enforcement; schools and colleges; federal and state highway safety organizations; the licensed beverage industry; professional sports teams including the Philadelphia Phillies, the New York Football Giants, the New England Patriots and the New England Revolution; Churchill Downs, home of the Kentucky Derby; and Keeneland Race Course, home of the 2015 Breeder’s Cup.

Since its inception in 2000, the HERO Campaign has grown into a major movement to prevent impaired driving that has received national recognition and awards. It has helped to reduce alcohol-related fatalities and incidents, including a 35 percent reduction in DUI fatalities in New Jersey and other states over the past decade.