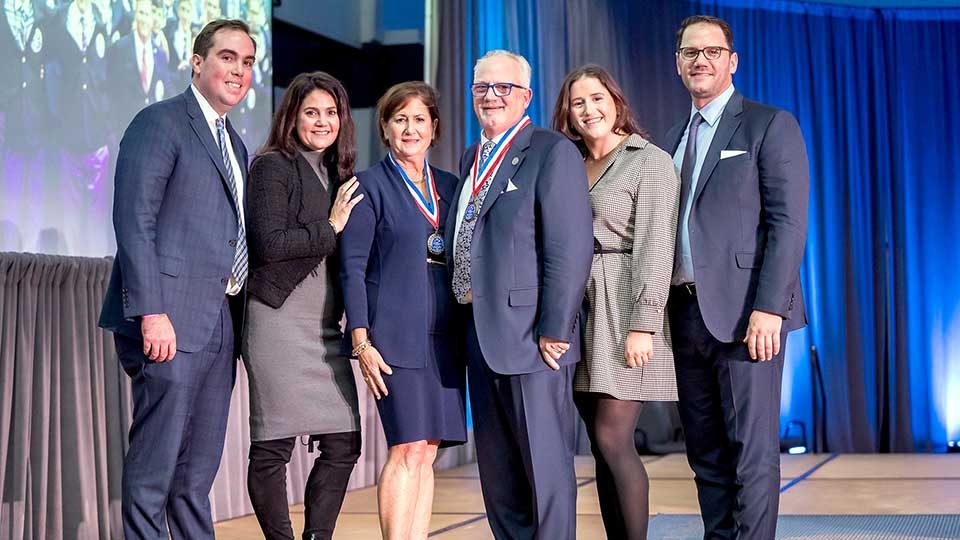 St. Augustine Preparatory School recently conferred the 2022 Gregor Mendel Award on Carmine and Dana Catalana at a ceremony attended by nearly 200 people on the school’s campus.

The Mendel Award has been bestowed annually by the Prep since 1974 to honor the outstanding contributions to St. Augustine Prep and the South Jersey community by some of its residents. The award and medal are named for Gregor Johan Mendel (1822-1884),

an Augustinian friar and renowned botanist. Mendel was abbot of the Augustinian monastery in Brun (now in the Czech Republic), where he conducted extensive experiments on pea plants. His discoveries led him to be recognized as the Father of Genetics. The Gregor Mendel Award is the highest honor awarded by St. Augustine Prep.

Carmine and Dana reside in Millville and are longtime members of the Prep family. The two met during their high school years while riding the school bus—Carmine, a 1976 graduate of St. Augustine Prep, and Dana, a 1978 graduate of Our Lady of Mercy Academy (OLMA). Both are also proud alumni parents of Nick Catalana, class of 2007. Their relationship began a long-standing commitment and family legacy with both Catholic schools.

Following his graduation from St. Augustine Prep, Carmine attended and graduated from Merrimack College. Dana went on from OLMA to attend Stonehill College, also in Massachusetts. Dana later attended the University of Pennsylvania where she received her master’s degree in social work. She served on the St. Augustine Prep Board of Directors from 2013 to 2021. Carmine immersed himself in the family business, Cumberland Dairy, where he has worked for 42 years and has served as president since 1995. Carmine has established himself as a respected leader in the industry as the business has continued to foster meaningful partnerships with well-known brands including McDonald’s, Wawa, and Rita’s.

Strong advocates for the “Keep Them in Blazers” student tuition assistance program and most recently strong supporters of the school’s “Innovation and Experiential Learning Initiative,” Dana and Carmine have left an enduring mark on the Prep, as well as institutions such as the Vineland Soup Kitchen, Ronald McDonald House, and OLMA.

“Dana and Carmine live the Augustinian core values of Truth, Unity, and Love and have been wonderful models of servant leadership, a trait they have passed on to their family, friends, and business associates,” said Fr. Robert J. Murray, OSA, Ph.D., Head of School at St. Augustine Preparatory School.

When speaking with students following the event Dana noted, “It’s an exciting night… What a memorable time for our family.” Carmine added, “It’s a proud night for St. Augustine Prep and we are honored to be a small part of it.”