Disease-resistant and drought tolerant, this native plant with showy flowers is a favorite of today’s gardeners as it was to Native Americans and American pioneers. Monarch butterflies are likewise sweet on it. 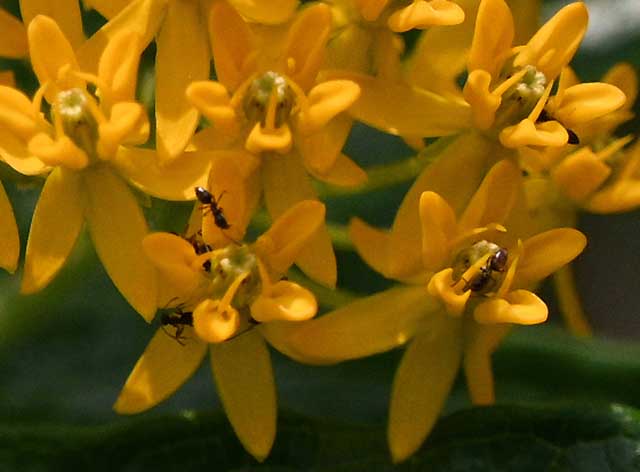 Ants feed on nectar that is composed of sugars, amino acids, lipids and other organic compounds. Scout ants leave a pheromone trail back to the nest until the food source is depleted. In many instances the ants protect the food source from other insects, thereby acting as a natural insecticide. Some ants eat aphids or can act as pollinators. PHOTOS: J. MORTON GALETTO
by J. Morton Galetto, CU Maurice River

Asclepias tuberosa, butterfly milkweed, or simply butterfly weed, has long been a favorite of mine, and of monarch butterflies and their fanciers as well. Asclepias is the genus of plants belonging to the milkweed family; tuber refers to its tuberous root and rosa to its lovely orange flowering head.

In my early gardening years I decided to dig one from the roadside and transplant it. This turned out to be an exercise in futility. The tuberous carrot-like taproot seeks water by growing deep beneath the soil’s surface. Furthermore, it tolerates and grows well in poor and even compacted soils. The ground I was attempting to dig in was dry and concrete-like, so as soon as I gave leverage to the shovel the root snapped off far above its terminus. Needless to say, propagation is most commonly accomplished by seeding.

A lot has changed in 35 years. Today, there are many options for growing butterfly milkweed beyond harvesting seeds or foolishly digging on a roadway’s shoulder. Mail-order nurseries sell seed, root stock, and plants. Local nurseries are increasingly offering natives and some even specialize in their sale.

The common name “butterfly milkweed” is fitting as well; it is truly enjoyed by nectaring butterflies and is a foodplant for both the monarch and queen butterflies, Cycnia inopinatus larva (one of the tiger moths), and tussock moths. Unlike other asclepias/milkweeds, it does not have the milky sap.

It has other names as well—orange milkweed, although it is sometimes yellow, and pleurisy root because Native Americans chewed the root for pleurisy, pneumonia, and other pulmonary ailments. Like other milkweeds it has toxic qualities so this Native American practice is ill-advised. Native Americans also brewed tea with the leaves to encourage perspiration and as a purgative to induce vomiting. Early American pioneers and Native Americans made powders and pastes to spread on sores.

When I read of herbal remedies my first reaction is, “Who would use these cures that seem so riddled with side effects?” Then I recall the information sheets that accompany our modern-day pharmaceuticals and their many paragraphs of warnings. And don’t even get me started on the television commercials for medicines that are followed by risks and warnings that exceed the length of the pitch, and often seem to run counter to the intended treatment.

Occasionally I will hear someone say they don’t want a certain plant in their garden because it is toxic. Many plants have evolved to be toxic as protection against insect herbivory. And many insects evolved to be tolerant of certain toxins, and in fact take on some of the toxicity of the plants they eat as a means of protection from other predators, such as birds. My point is that most people are simply naïve to the fact that their yard is full of plant toxins. Often those same scare-mongers do things like spray for ticks, and I assure you that anything that will kill a tick surely has greater health ramifications than a milkweed in your yard, unless you were planning to graze upon vs. gaze upon it!

That being said, the noxious cardiac glycosides in milkweed can cause diarrhea, nausea, seizures, confusion, heart rhythm irregularities, respiratory paralysis, and in large quantities death. If you handle milkweed and its sap it can irritate your eyes or skin. But in my experience you are unlikely to encounter these issues unless you have tried very purposefully to interact with the sap and rubbed your eyes or ate it.

The adage “You are what you eat” is in play when discussing monarchs and milkweeds. Monarchs will nectar on milkweed and other plants but they lay their eggs exclusively on members of the Asclepias genus. The egg develops, hatches, and lthe arva then eats the host plant. As a result the larva is toxic to those who do not have its immunity to the cardiac glycosides. Birds love caterpillars and many species raise their young primarily on caterpillars—thousands of caterpillars—another great reason not to use insecticides unnecessarily. But when a bird eats a monarch caterpillar it becomes ill, so it doesn’t eat another one. Basically, one monarch larva is sacrificed so many others will survive.

Although it is not a host plant for other butterflies, Asclepias is a great source of nectar for them and for other pollinating insects. So you will see swallowtails, skippers, painted and American ladies, and other butterflies, many bee species, flies, wasps, occasionally hummingbirds, and others visiting them. When the plant is in seed, milkweed beetles may come to eat the tiny kernels.

We had a stand of butterfly weed in our yard for a long time, but eventually as the soil built up with organics I suspect the earth became too rich and moist for it to continue in that location. The soil where it grows must drain well. I find it in drier and sunny edges, often in poor soil that is hot hospitable to other plants. It will handle a mix of sun and shade. Its long taproot aids it in finding water, and as a perennial it normally appears year after year. Like many native plants it is disease resistant.

For a number of years, in early autumn, our plants were destroyed by caterpillars. I was really sad to see them laid low since they look great from spring until frost. In the spring their bushy leaves are attractive prior to the lovely orange blooms, and the erect seed pods give a structural interest to the plants in the fall. Then the pods split open to reveal rows of silky seeds. Seeing the chewed leaves I had to remind myself why I planted them to begin with—to attract and enjoy butterflies. Duh, be thrilled!

The plant is compact compared to other milkweeds, growing one- to two-feet tall and wide. The leaves are dark green on top and lighter on the bottom. The stems are light green to purple with small hairs along their length. The leaves, which grow alternately along the stem, are smaller than other milkweed species. Each leaf is elongated about two or three inches and slightly cupped lengthwise. The top of the stem branches out and displays the blooms. Its flat orange cluster flowers are three to five inches across and evident from June through September. Each individual flower has some petals that are erect and others that go downward, and lasts about a month. It needs no fertilizer and little water so that it is drought-tolerant. It spreads only from self-seeding. It is herbaceous so it will die back each winter.

If you have planted butterfly weed you must be patient in the spring, as it will emerge a bit later than your other herbaceous perennials. Rabbits like the young growth. Conversely deer don’t seem especially interested in it. Aphids will find your milkweed, and if ladybugs don’t do their job the Lady Bird Wildflower Center suggests blasting them with water or spraying the foliage with soapy water.

I think butterfly weed looks great both in a formal garden or in a prairie-like wild setting. It generally will reappear for a number of years and self-sow in some areas—the gift that keeps on giving!