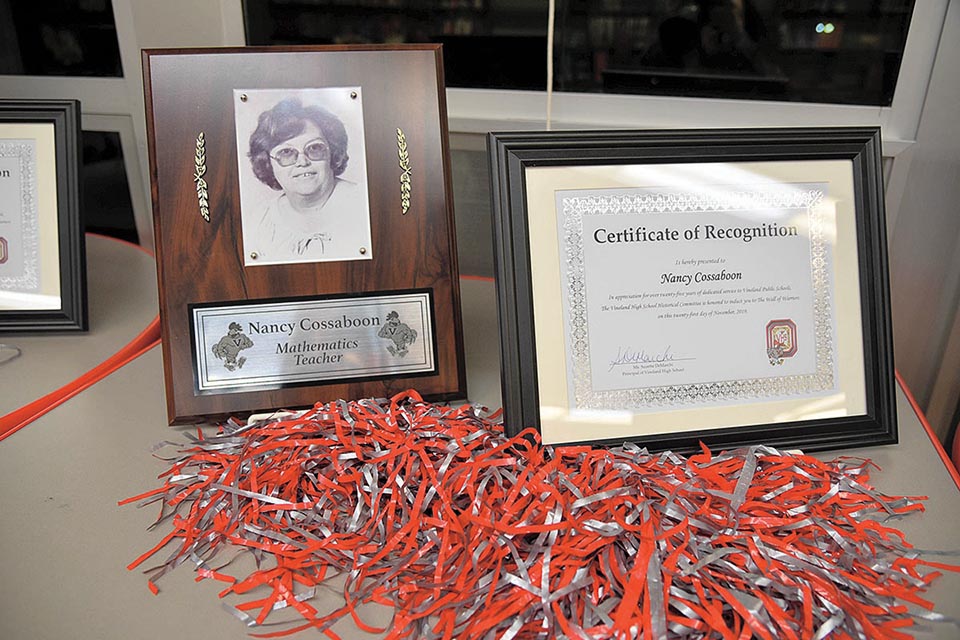 Vineland High School honored three former educators with many years of service recently, recounting their careers and showcasing their portraits which now hang in the upstairs atrium—“the Wall of Warriors”—at the VHS South building during the 7th annual ceremony.

The group this year included Nancy Cossaboon, Barbara Sheftall, and Peter Starzan. They join the 50 other previously inducted honorees.

The concept of a gallery of plaques with photos acknowledging the accomplishments of the school’s most celebrated staff members was created by the VHS Historical Committee, which includes alumni, current staff members, and students.

The ceremony began with a singing of the Alma Mater by the Select Choir. VHS teacher and Historical Committee President Christopher Mohan then officially opened the ceremony. He was followed by principal Suzette DeMarchi, attending her first dedication as principal.

Members of the history club carried out all of the research, composed the narratives for each honoree and read them at the ceremony. Members included Marissa Marchese, Krishna Patel, Alexis Nappa, and Preet Patel. Nancy Cossaboon began at the VHS 9-10 building in 1979, teaching math in various capacities including an SAT prep class, summer school math classes, home instruction for students on bedside, and alternative high school math classes, all in addition to her regular math class. Ms. Cossaboon stated that she always felt that VHS students were just an extension of our family, so she thought of them as her children. She retired in 2006 and moved to Roxborough in Philadelphia to be closer to her family.

Barbara Sheftall worked at VHS for 37 years, teaching English and American Literature, as well as Journalism. She was an advisor for the Color Guard, Cheerleading squad, the Hootenanny Club, and the student newspaper HiSpots, as well as curating the student section of the Daily Journal known as The Clan Courier. While she loved her teaching and advising positions, she is also proud of her time as a crisis counselor at VHS.

Peter Starzan began teaching in Vineland in 1959, when Landis was still the high school. He was class advisor for the classes of 1965 and 1966 and enjoyed attending the class reunions. During the 1960s he was Assistant Wrestling Coach to Mr. Anthony DiTomo for some of the most successful wrestling teams in VHS history. He also formed the Golf Club in the 1960s and became Faculty Manager (assistant to the athletic director) in 1974 while still attending to his teaching responsibilities. At VHS he taught Ancient Civilization and Modern European History, and pioneered the Greek History and Mythology class and helped develop the Holocaust Program for the VHS History department.