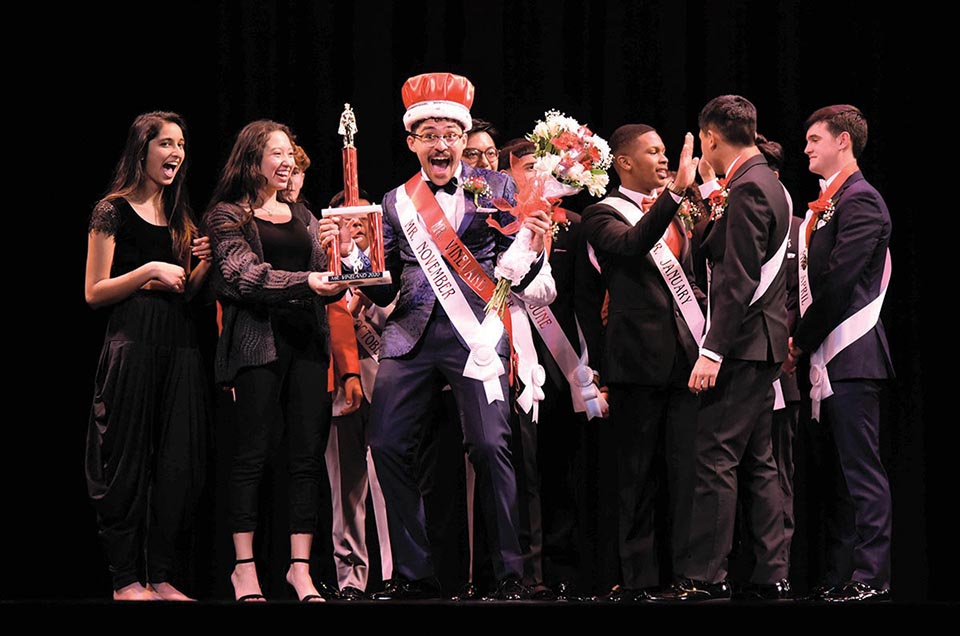 Ferdinand Moscat was crowned Mr. Vineland in the 27th annual competition before a large crowd of family and friends in the auditorium of VHS South.

Moscat was one of 12 candidates selected by senior girls to vie for the prestigious title. His hobbies include theater, writing, and spending time with his friends. After graduation, Ferdinand plans on attending college and pursuing a Drama degree.

Moscat, Mr. November in the contest, received his crown and sash from last year’s winner Bubba Beyer. Beyer, a freshman this year at Rowan College of South Jersey, is pursuing a degree in Criminal Justice.

Each contestant was scored in the following areas—casual attire, talent, and formal attire. The field was then narrowed down to five finalists, who answered the final question posed by veteran host Charles Gaudio.

Moscat offered a heartwarming response during the question and answer portion, naming Vanessa Rasmussen as the teacher that has most influenced his time at Vineland High.

Judges were Dr. Mary Gruccio, superintendent of Vineland Public Schools; William Burris, retired Vineland Police Officer; Geraldo Serrano, operations manager at Camelot Academy; Teri Godlewski, director of Special Education; and Dion L. Colvin, from the Vineland Police Department and first runner up, Mr. Vineland 1999. Scores were tabulated by Scott Musterel and David Hart of the Vineland Public Schools finance department. Funds raised from ticket sales and calendars with photos of each contestant sold at the pageant, will be used to help pay for the senior prom.

Former Mayor Ruben Bermudez, owner of Juvante Formal Wear, was publicly thanked by Gaudio for providing the tuxedos worn by the contestants each year of the pageant without charge.