Posture of an insect, the praying mantis, sends our columnist on a mission of discovery. 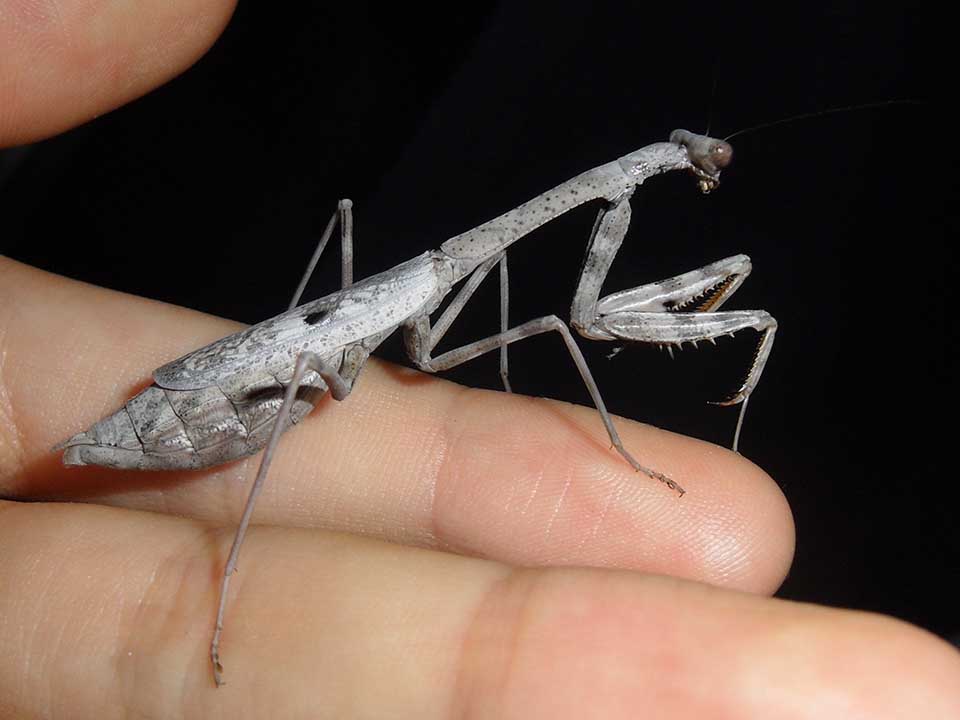 Let us contemplate the praying mantis. The Greek word “mantis” means prophet, thus the name derives from people’s perception of a holy person imploring the almighty. You could anthropomorphize this insect’s posture to be a prayer before eating, or even a moment of silence as it lies in a still, quiet pose. However in the case of our subject species Stagmomantis Carolina, or the Carolina praying mantis, it is a “make-ready” stance for its next meal.

While researching the origin of the position of hands held together for prayer I found a lot of interesting hypotheses and claims, so I turned to my favorite theologian for assistance. He deemed much of what I came across to be conjecture or just plain malarkey. I was further assured that the original stance for Christian prayer was called “orans,” where the prayerful individual raised both hands by his side and then elevated them above his head.

A number of sources suggested that hands held together was a sign of servitude, often associated with having one’s hands bound. I for one would be praying if my hands were bound. A civil war historian once told me, “There are no atheists on a battlefield.” Under stress prayer comes easily to me.

My theologian agreed that a gesture of submission to God would make sense. And this position is not exclusive to Christianity. The Japanese display humility with palms held flat together and fingers skyward. In India the gesture is called “Namaste,” a greeting conveying dignity and respect.

In the Mantodea Species File (MSF), a database of the world’s mantids, there are some 2,400 species known to exist globally. Their classification looks like this: Kingdom: Animalia; Class: Insecta; Order: Mantodea; Family: Mantidae; Genus: Stagmomantis—and by most of us laity simply mantid or mantis. Our native Carolina mantid can be found from Mexico to the Canadian border and from the east coast into the mid-west.

So what are they waiting for and what’s for supper? They feed on many types of insects, including other mantids. Their devout appearance does not rule out cannibalism although they definitely snack on lots of their insect cousins. Because of the multitude of pests that feast on agricultural crops, farmers like mantidae. However, know that they eat beneficial insects as well, like bees and butterflies. And the larger species of non-native mantid are known to feast on not just insects but also small birds, frogs, and amphibians.

Mantids are also preyed upon by mammals, in particular bats. Mantids can detect the clicks used by bats to echolocate their meal, and they will tumble to the ground to evade capture. They are capable of putting up a fight as well, so it is not an easy surrender.

These insects breed from late summer to early winter. It is known that female mantid while mating will sometimes kill the male. This may not be common in Stagmomantis Carolina, our native mantid, but it occurs in Tenodera aridifolia, the Chinese mantid, and it is estimated to take place in 13 to 28 percent of pairings. The female decapitates the male but his body continues to inject sperm. It is thought that this might be more effective in that the body has a longer period to fertilize the eggs, versus a swift encounter.

The mantid’s interest in eating insects prompted their importation by the agricultural community not only to the United States, but to Australia as well. The Chinese mantis (Tenodera aridifolia sinensis) was introduced in the Philadelphia area about 80 years ago, and the European Mantid (Mantis religiosa) was introduced to the Rochester, New York, area about 100 years ago. This has had the unintended consequence of these species outcompeting our native Stagmomantis Carolina. (Note the religious reference in the scientific name of the introduced species.)

Our native Stagmomantis Carolina lay around 30 or 40 eggs in a casing, compared to the Chinese mantid’s 50 to 600 eggs. The case or ootheca is considerably larger in the introduced species, and is rounded versus being a flatter covering on the branch or twig. It is made from a foamlike secretion called spumaline, excreted from the abdominal glands. Initially it is soft but quickly hardens. All adults die during the first frosts and the case winters over, while the juveniles hatch in the spring. We see more mantids in September and October because they have attained their adult size and thus are more easily spotted.

Upon leaving the casing the young are immediately independent. It is not uncommon to hear of a teacher who has inadvertently left an egg casing in his car or classroom only to have it hatch out hundreds of juvenile mantises which quickly disperse, often causing quite a commotion!

The praying mantis has some super powers, many of which relate to its head and eyes. Have you ever used a View Master, the child’s toy introduced in 1939 and popular until 1997? Well, the mantis sees in stereo vision—3D, with a very wide depth of field, enhanced by its ability to move its head 108 degrees. German zoologist Samuel Russel discovered in the 1980s that this 3D vision is limited to the mantis in the insect world. Each mantid eye has a forea or photoreceptor, allowing it to track movement with amazing acuity. In fact mantids hunt primarily by perceiving movement vs. field ground differentiations.

Mantids can move their heads without moving their bodies, enabling them to use stealth in trapping prey. Although they remain still they can ambush with great speed and accuracy, so quickly that it is hard for the human eye to catch.

In most species males fly and females do not, as their heavy bodies are not supported by their wings. Males are more streamlined for flight while females are stockier and have thick wings that are often shorter. In the Chinese and European mantid both sexes can fly, but females can stay aloft for only short distances.

Mantids do not present any danger to humans. Although some people have kept them as pets they don’t strike me as very warm and fuzzy critters. They live for only six to nine months and are hard to care for, but teachers often put a casing in a dry aquarium as a natural history lesson for students.

These odd-looking predators with their fascinating life history can be found in our gardens. Hopefully this article will prompt you to learn more about them and the other critters in your backyard.