The cranberries on your Thanksgiving table were likely grown in southern New Jersey bogs. 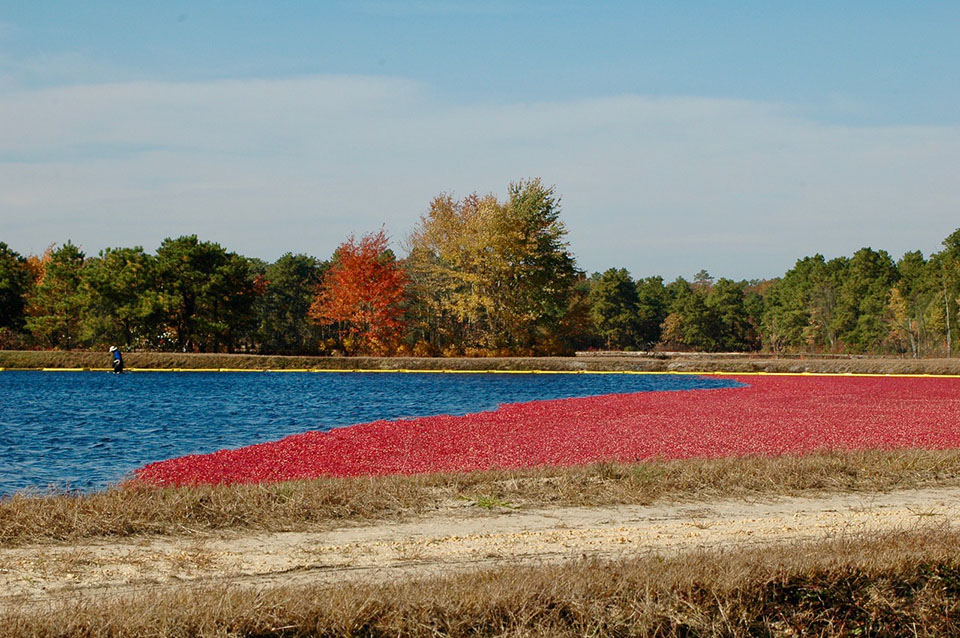 I’m a fan of Thanksgiving with all the trappings, everything from giving thanks to pumpkin pie, and yes, with whipped cream! But clearly one of New Jersey’s top contributions to the holiday is the cranberry. Most cultures give thanks around the time of harvest. The U.S. tradition is said to have begun in 1621 when Pilgrims who settled in Plymouth Plantation feasted with the Pokanoket Tribe. Although Native Americans used cranberries it is not known if they were included in this original dinner. But today 20 percent of the harvest is eaten on Thanksgiving Day.

In my husband’s family any mention of Plymouth, Massachusetts, evokes a quintessential example of my departed father-in-law’s hit-and-run style of tourism. The story is told along these lines: The young siblings were repeatedly asking when they would arrive at their destination, presumed to be Plymouth Rock. The family made a fuel stop and resumed their travels.

Having been previously chastised for their continual yammering of “How many more miles?” about an hour after filling the car tank, one of the youngsters mustered the courage to inquire once again, “Where’s Plymouth Rock?” To which my father-in-law responded, “Didn’t you see it, across from the gas station?” Thus epitomized my father-in-law’s approach to family vacations. 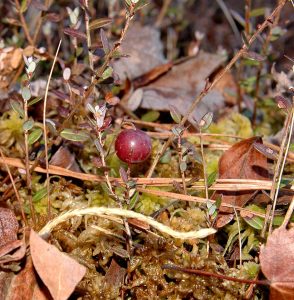 In any event, speed on a CU Maurice River walk is not a desirable component. We stop to examine many details, and one native plant that we sometimes inspect in the fall is the wild cranberry, Vaccinium macrocarpon. The New Jersey pinelands is one of the few places the plant grows naturally. In the wild we find cranberries in Camden, Cape May, Cumberland, Gloucester, Middlesex, and Monmouth counties.

The cranberry is a dwarf evergreen about five inches to 15 inches in height. Personally I’ve only seen the wild variety to be a low creeping plant along bogs and ponds. Its stems are fine and sometimes the bark is hairy. The nodding flowers are solo, in couplets, or rarely in threes. Its fruit is pale pink to red depending on ripeness. It is normally tart, although the University of Wisconsin-Madison has recently bred a cranberry with higher sugar content called “Sweetie.” These would not be found in the wild.

Native Americans used cranberries long before European colonists arrived. They made clothing dyes and had many medicinal purposes for the plant, including poultices for wounds and swelling, fever, and seasickness. During winter months a concoction called “pemmican,” containing dried meat, fat, and cranberries, was consumed by Native Americans and colonial fur traders—yesteryear’s energy bar (S. Whitman-Salkin, National Geographic). Being high in vitamin C, cranberries were also stored in water-barrels by colonial sailors as a staple to prevent scurvy.

New Jersey’s cranberry industry began in 1835 near Burrs Mill in Burlington County. Many other bogs were soon constructed wherever there was a good source of water. Some of the old mill ponds near our hiking trails were once cranberry bogs. Just upstream of Cumberland Pond at what was Bennetts Mill there is an area that was once flooded for cultivation of this berry. Along Weatherby Road, Route 548, in Upper Township there is an old cranberry pond on Tarkiln Brook, one mile west of Route 49. It’s a great spot for viewing otters. The property is a private triangular-shaped piece, bordered by Bellplain State Forest on two sides and Peaslee Wildlife Management on the third.

Today the Pinelands National Reserve is dotted with active and inactive cranberry bogs, especially just north of Hammonton. Some of New Jersey’s first cranberry farms are still operated by descendants of the original owners.

Pinelands Commission records relay that New Egypt’s Elizabeth Lee sold her canned sauce under the name “Bog Sweet” in 1917. This product was probably more similar to preserves than the canned jellied sauce we now enjoy. She joined forces with Marcus Urann, a lawyer from Massachusetts, who had started his cranberry company in 1912 and realized the potential to extend the shelf life of the berries by canning them. By 1930 they teamed up with John Makepeace and created a cooperative known as Ocean Spray. Headquartered in Massachusetts, it now includes about 700 growers. Currently, A.D. Makepeace is the world’s largest grower.

In the 1940s canned cranberry sauce began to appear as a market item. The cranberry industry achieved new levels of production with the advent of wet-picking in the 1930s. Then in the 1960s bogs were flooded and a machine with a large water reel was driven across them to knock berries off the vine, further mechanizing the process. This harvest method is employed primarily mid-September to mid-November and replaces various hand techniques. Since the berries have air pockets they are buoyant. The floating berries are pushed to one end of the bog and lifted by conveyor onto trucks. Then the harvest is sorted and shipped to processing plants for canning, or bagged for market.

New Jersey is the nation’s fourth largest state in the production of cranberries. Only Wisconsin (4.67 million barrels), Massachusetts (2.16 m bbl), and Oregon (558,000 bbl) exceed New Jersey’s production of 529,000 barrels (2019). Each barrel weighs about 100 pounds. Most of the state’s cranberries are grown in Burlington, Atlantic and Ocean county bogs.

Yield for these top production states in 2019 ranged from 175 to 224 barrels per acre. In 2019 the U.S. harvest was 7.8 million barrels, of which about 3 percent was retained fresh and the rest was processed (USDA, National Agricultural Statistics Service, NJ Field Office). A barrel sold for $28.70.

Today cranberries are still prized for their antibacterial properties. They have long been used to alter the acidity of urine. Some people swear they help remove kidney stones. Studies vary in their conclusions. One study found that the juice helps to prevent adhesions of E. coli in the gut, bladder, and urinary tract, thus preventing the bacterium from multiplying and causing disease. In the 1990s another study determined that the age-old theory that cranberries are effective against urinary tract infections was in fact true. Sixteen ounces of juice a day was 73 percent effective against UTIs. In 2002 two independent studies found that antioxidants like those in cranberries appeared to provide some protection against Alzheimer’s disease. Evidently there are even veterinary uses. Most homeopathic proponents would suggest that consuming the product with few added sugars is important (J. Meuninck).

However you choose to enjoy your cranberries this Thanksgiving, I hope your holiday is sweet and safe!