“Oldtimers” meet weekly for coffee and talk of the good old days, like the 1947 season of Bridgeton High’s Garnet football team. 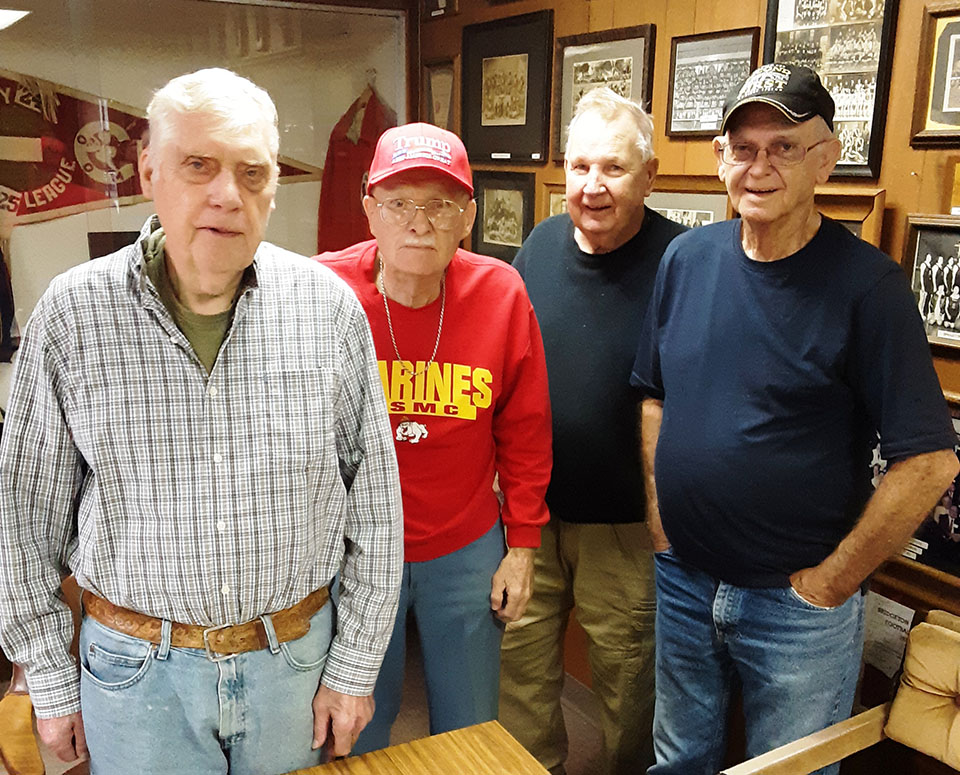 Pictured on a recent Thursday morning at the All Sports Museum in Bridgeton, from left: Jim Zimmerman, Charlie Chew, Earl Gandy, and Doug Hickman. PHOTO: DAVE HITCHNER
by Ahmad Graves-El 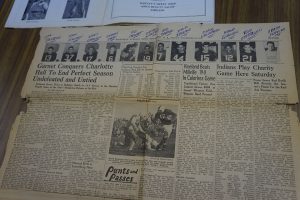 “It was raining like heck that day. It was raining real, real hard. We beat ’em in the rain.” These are the words of Charlie Chew, of Bridgeton, as he fondly recalls one of the region’s greatest high school football games—and he was a participant.

That game was played in 1947 and the combatants were the Bridgeton Bulldogs and the Vineland High School Poultry Clan.

Bridgeton won the hotly contested matchup, 15-12, on their way to earning the team’s first-ever undefeated season. The game between the two rivals was for bragging rights, plus more.

“That was for the county series,” Chew recalls, “and that’s the game that made us Group IV champs.”

Chew, who’s 91 years old, and several other “oldtimers” from Bridgeton High School football teams of decades past, meet up to share memories like these, every Thursday at the All Sports Museum of Southern New Jersey. The museum is located at Richie Kates Sr. Drive, and until 1998 was known as the Bridgeton All Sports Hall of Fame Museum.

The 1947 Bulldogs ended their magical, undefeated season 10-0, by toppling Charlotte Hall 14-7, for the State Championship.

That group has gone down as one of the best football teams in the school’s history.

Chew provided some eye-opening team and individual stats and awards the Garnet garnished that year.

“We won County, Group IV, [and were the] State Champs,” he says. “All 11 players made the All-County Team, First or Second Team.

According to Chew, the team, coached by Dave Shapiro, who ended his career with a 61-19-3 record, was an offensive juggernaut. “Our team scored 285 points,” he says. 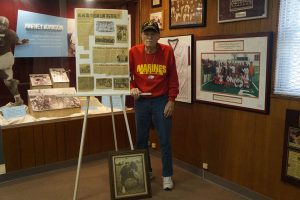 Chew also says Shapiro “was mostly a defensive coach” who “was a perfectionist” and “knew what the hell he was supposed to do.”

“Everything was fundamentals,” he says. “That’s why we were so good.”

Chew was the center for the team that excelled in running the single and double wing offenses.

That 1947 team was a cohesive unit that had played together for years, starting, according to a 2012 article written for NJ.com by Jack Hummel, in “an intramural football program” several years before their undefeated season.

“We had an all-around team,” says Chew, who also played several games at linebacker. “Some of the guys on the second team, if they went to another high school, they’d have probably started.”

Although the team was individually and collectively outstanding, in Chew’s mind, there was one player who stood out among the standouts.

“Oh man. Had to be Duke Wuzzardo,” Chew says, when asked who he thinks was the best player on the team. “He was All-State, All-South Jersey, All-County. He started three years. He was a halfback. He just was a natural.

“He lettered in four sports. He was a triple threat. He [could] punt, pass, and ran. That’s why I say he had to be the best.”

According to Chew, that 1947 team was one of the hottest tickets around.

“There were two- to three thousand people [at the stadium] every game,” he says. “We always had big crowds.”

The meetings for the “oldtimers” were started by one of Chew’s teammates, Tom Matalucci, about 15 years ago. “Tommy was a good friend of mine,” he says. “He was a fullback on the team.”

Chew began attending the meetings after his wife passed away, about 10 years ago. “We just sat around, talked about old times,” he says.

As Father Time goes by, the participants at the regular Thursday meetings have dwindled. 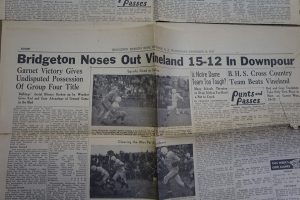 “This table was full of guys,” says Chew. “Most of the guys all passed away, now. I’m the only one really from the old gang who comes here.”

As the conversation returns to football, Chew, who says Notre Dame is his favorite football team and recently watched them upset Clemson, who was the Number One ranked team in the nation, shares his current thoughts about the game he continues to enjoy.

“It’s not the same, that’s for sure,” he says. “The equipment’s a lot better. Their helmets—now everybody has a faceguard. They all got [mouthguards] for their teeth. We didn’t have none of that.

“In fact, I was the only player on our team that had a facemask and that’s because I had nosebleeds. My nose would bleed very easy,” he continues. “These helmets these kids got, I can’t believe. We had them old leather helmets. These kids today got it made.”

Although, Chew doesn’t keep up with Bridgeton’s high school football team like he used to, he’s still open to sharing some sage advice with today’s players on how to succeed in the game.

If you want to learn more about the undefeated, State Champion 1947 Bridgeton High School Football Team, or find out about who’s been inducted to the All Sports Museum of Southern New Jersey, or learn about interesting artifacts currently on display, visit allsportsmuseumofsnj.org or call 856-455-6361 or 609-319-3873. When the COVID-19 pandemic subsides and the building re-opens, the public is welcome to enjoy the displays during published hours of visitation.