Along with other warblers, the yellow-rumped warbler, dubbed “butter butt,” often has birdwatchers complaining of “warbler-neck.” 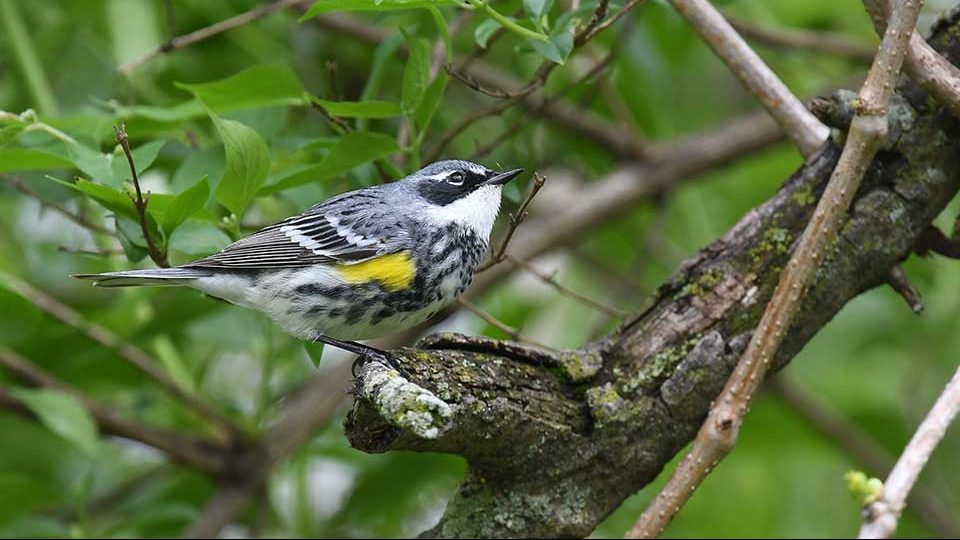 The breeding plumage of this adult male yellow-rumped warbler is striking. The auricular, or cheek, mask is black where the female’s is brown or gray. Photo: Andy Reago and Chrissy McClarren, Flickr
by J. Morton Galetto, CU Maurice River

One of the most commonly seen small songbirds in the late fall through early spring in our forests is the yellow-rumped warbler. It is an absolutely lovely bird, but because of its abundance it’s sometimes not given as much attention as it deserves. It’s petite, although it is a little larger when compared to other warblers. Yellow rumps are perching birds that often sit in the open, making them easier to spot than more flighty species.

You often find them lower in the foliage than a number of other warbler species and sometimes they will park in the outer parts of the canopy. In winter when deciduous trees are leafless, spotting them is even easier. Birders complain of “warbler-neck“ because of straining to look upwards at high-perching species. Sometimes when you’re hoping for diversity a flock of the same bird might seem less than impressive, but I suggest you just go with it, and don’t be that “grass is always greener” person.

In terms of warbler-neck, a famous birdwatcher in South America taught me a little trick. Once you spot a bird, keep your eyes raised and lower your chin, continuing to look through your binoculars. This significantly reduces the strain.

Yellow-rumped warblers are considered a rare New Jersey breeder, nesting in the far northwest of the State in very low numbers. They prefer the northeastern United States, although the vast majority, 63 percent, fly to Canada and up into Alaska. Their ideal breeding habitat is the conifer boreal forest, or “taiga.”

The boreal ecozone actually spans eight countries—the United States, Canada, China, Finland, Japan, Norway, and Russia. “Boreal” is defined by its high-latitude environment, with six to eight months of freezing temperatures each year, a short growing season, and trees that must reach a minimum of 16 feet tall. Yellow-rumped warblers breed in this ecosystem in late spring and summer.

As you may recall, migration is driven by food and nesting resources. The warbler moves based on weather and food availability. The invertebrate populations in the taiga are a draw for nesting warblers; spiders, caterpillars, moths, mosquitoes, treehoppers, beetles, mayflies, and the like are all important fare.

When they are here in their southern winter locale they have developed a unique ability to eat waxy berries, especially bayberry and wax myrtle. In fact they are the only warbler with this gastrointestinal capacity. This allows them to winter farther north than any other warbler species, at times as far north as Nova Scotia. Other creatures do, however, compete for bayberries and wax myrtle. Naturalist Patricia Sutton lists 25 different species for each type that forage on these shrubs.

They also eat the cones of eastern redcedar trees (these are not berries as commonly believed). Many birds compete for this resource—robins, mockingbirds, cedar waxwings, juncos, yellow-bellied sapsucker, turkeys, flickers, and others (Sutton lists 32 species). They will also eat seeds. Their selected food sources allow us to observe them here in southern New Jersey. At feeders people use fruit and suet to attract them.

Their breeding plumage is flashier than their regular wear, but their feathers aren’t too shabby in winter either. In the off-season most folks look for the yellow vent that gives them the nickname with birders of “butter butts.” There is also a bit of yellow hidden in part by the wing coverts on the sides of the chest. If you have good optics you will want to take note of a rim of white under and over the eye, giving it, dare I say, an appearance of wearing peepers.

In the spring and summer their breeding plumage is fancier than in winter and a striking combination of whites and blacks, with yellow on the sides and rump and the addition of a yellow spot on the crown. The male has a black mask that contrasts with the white throat. And the white line under the eye shows up well against the black of the mask and cheek. The female’s cheek or auriculares tend to be brown or gray where the male’s black, and so the contrasts are not as strong.

When these birds migrate north and arrive in their breeding grounds they will select a conifer to make a cup-shaped nest. The female will lay four or five eggs that will be incubated for a dozen days by both parents. After 10 to 12 days the young will fledge. The young and adults will have an insectivorous diet during the breeding season.

On a chilly day—when they raise their feathers to trap and warm air to insulate themselves against the harsh winter—they are especially endearing, like little fluff balls. So bundle up yourself and enjoy a few butter butts while they visit us this winter!

PrevPreviousTop 10 for Winter
NextBack on BoardNext