Area students, grades K through 12, prepare for a robotics fest while forging the future in science, technology, arts—and life. 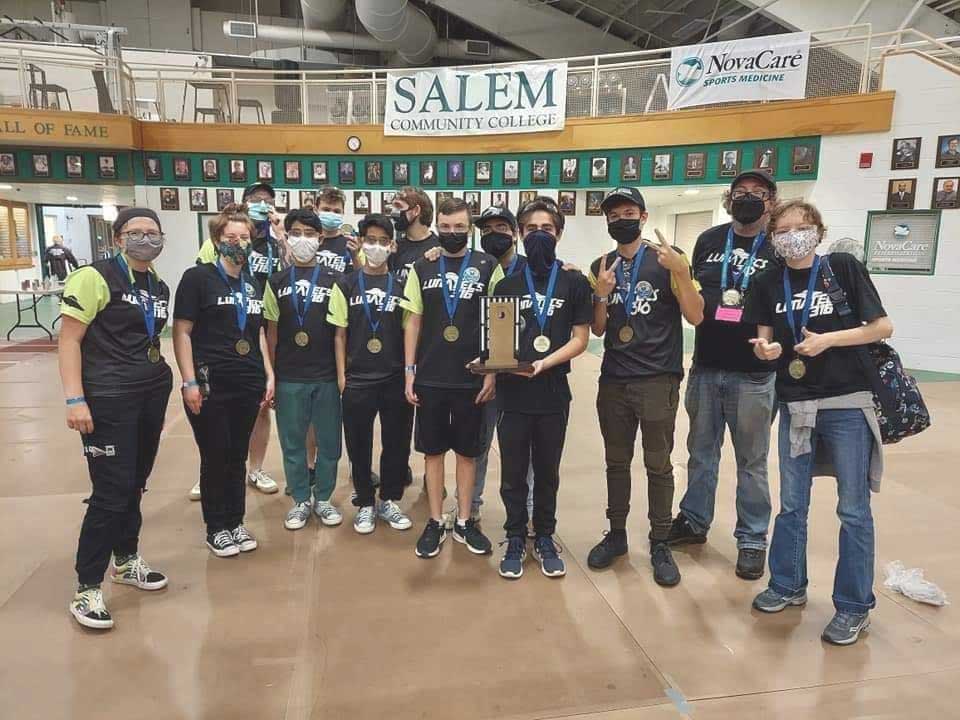 Lunatecs win at the Duel on the Delaware.
by Stephanie Farrell

Local robotics teams are gearing up for the annual STEAM Fest and 5K Run Fundraiser and then it’s time for serious competition.

Several students lean over the mission board. One calls out that they need less rotation.

“I have 1.5. Do you want 1.25?” asks Lydia Bohl, 12, programmer at the laptop. When they answer affirmatively, she programs the changes and the robot is reset. Several adjustments later and they accomplish the mission. A cheer goes up and then they quickly calculate how many points that task is worth.

Kathy Simpkins, president of South Jersey Robotics (SJR), says that Lydia’s team is one of eight in the area.

“Back in 1999 it [SJR] started as one team who wanted to build a robot and compete,” Simpkins says. “It’s a quality STEM experience for K-12 in the South Jersey area. We had 18 teams pre-COVID, so we are rebuilding now. The global organization we’re a part of is FIRST (For Inspiration and Recognition of Science and Technology).”

She explains that there are three levels of FIRST. Lydia’s team is the youngest level, FIRST Lego League (FLL); the team uses Lego products. The second level is FIRST Tech Challenge (FTC) and they use Technic products. The highest level is FIRST Robotics Competition (FRC); these teams build an industrial-sized robot. Each level competes at different times during the year.

Simpkins describes the high school schedule: “From September to December, the team is taking classes, learning about tools, design, and strategy.”

They also participate in pre-season events. Recently the FRC teams competed at the Duel on the Delaware at Salem Community College. The official season starts in January with a qualifying competition in the spring at Lehigh University. If they qualify, it’s on to world championships.

Community involvement is a big part of Robotics.

“During the offseason they worked on designing, engineering and donating adaptive devices,” Simpkins says. “Velocity, a team that meets at the STEAMWorks on Commerce Street in Bridgeton, runs a one-week summer camp for youth in that area. They’ve done that successfully for three years.”

SJR is hosting its annual STEAM Fest and 5K Run at Washington Lake Park in Sewell on November 13 at 10 a.m.

“In addition to the run, we will have robots on display, including 125 lb. industrial sized robots,” Simpkins adds. “There will be free STEM activities set up throughout the park. These will promote programs and engage the youth. There will also be College Row—they will all be out. There will be a LEGO contest, the Gloucester County Bomb Squad will be there with their half-million dollar robot. It’s quite a sight to behold.”

Some of the colleges attending include Drexel, TCNJ, Rowan, Stockton, Widener and Salem Community College.

Joy Torres, coach for Velocity, says, “It’s a funny story how I became a mentor. The Robotics practice arena is behind my yoga studio. I was curious about what they were doing. I visited the shop and was amazed by their skills. They asked me to be a mentor.” Torres likes that it involves tools and supporting youth. “We have six students,” Torres notes, “one freshman, two juniors, and three seniors. A few are more focused on software—coding and programming. The other are mechanical. Right now in the off-season we meet twice a week for about three hours. Come January a 300 page document will kick off the season. Then it will be five days a week. We have to read the manual, learn the game, build the robot. It involves designing, prototyping, building, coding. There is a lot of trial and error, knowing we can make this better. We have six weeks to build the robot.”

They will practice in the arena in a space provided by The Hope Loft, a non-profit in Bridgeton. The robot will need to complete missions, such as throwing a Frisbee, picking up a tote and placing it on a shelf or latching onto a trashcan and dragging it.

“It takes a lot of teamwork and strong communication,” Torres continues. “ It takes collaborating when designing and prototyping. I try to imagine what a team in Google is like, bringing all ideas to the table. Then you hammer it out, determine what is cost effective, and then the actual build.”

After the recent competition, her team debriefed and all agreed they had to do better in the pit: “It’s just like at Nascar, you have to fix the robot. It requires observing and knowing how to troubleshoot.”

Team Velocity is bringing their robot, Charlie, to the STEAM Fest and Robot Run and Torres says: “He’ll be shooting balls.” They also are hosting a hands-on science experiment.

Taking the prize at the Duel on the Delaware was the LUNATECS. Team Captain Kirsten Nelson is a high school junior. This is her sixth season in SJR; her third year on the LUNATECS team. “I’m a mechanical student,” Nelson says. “That’s the part of the team that builds. I also serve on our chairman’s committee. That’s an award given by FIRST Robotics competition. It’s based on community outreach and service.”

Nelson, who is interested in pursuing mechanical engineering, appreciates the team aspect. “I’ve never been a sporty person,” she admits.

Here they are creating something and she enjoys the competition. They are heading to Ramp Riot next, an offseason competition in Pennsylvania. Samtrooper, their robot, will be showing off his skills at the STEAM Fest. They will also have remote control cars for hand-on fun.

Lydia, who successfully reprogrammed on the fly, is in her fourth year with Robotics. “It’s cool to see the robot do what you programmed,” she says. “If you do it right. There are so many blocks and you have to figure out what each block does.”

Though it makes her nervous, she enjoys the competition. Her older brother, Toby, is on the same team. He’s in 9th grade, has participated in FLL for five years and also enjoys programming.

“Since the project is split between two teams, I am a team manager,” says Toby. At the STEAM Fest, Toby says they are hosting a Lego Build competition and a Lego car derby. He plans to move to FRC next year. Mark Zeits, 10, is in his first year in FLL and was enjoying a cookie during break. His favorite part? “I like getting to solve problems with my friends and having fun.”

PrevPreviousCrafts and Antiques
NextJohn Waite Performs Saturday at The LevoyNext