Vultures in the Pyrenees of southern France are a comeback story much like our American eagles. 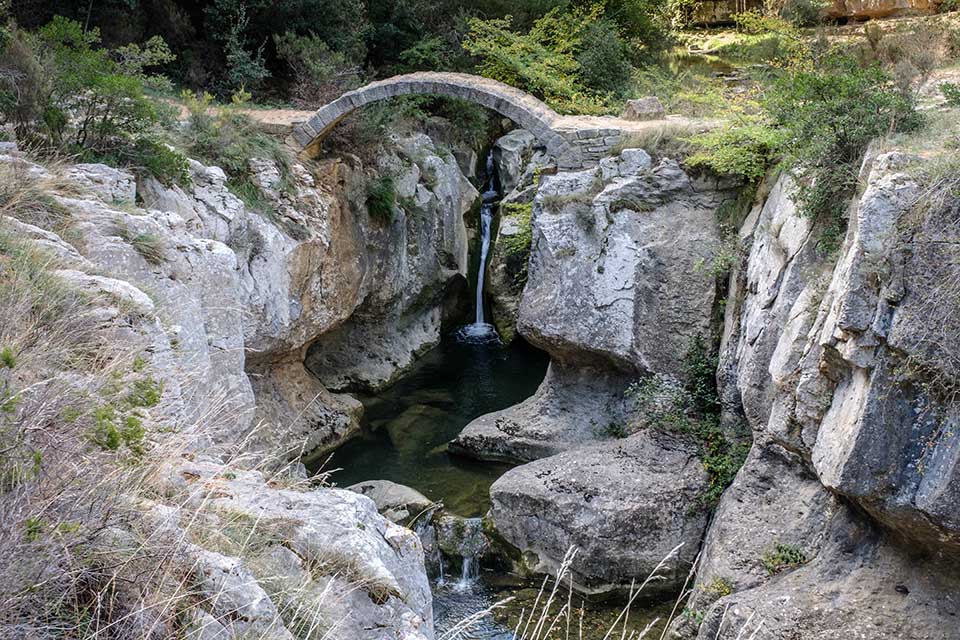 The author explored a trail adjacent to the vulture observation area. This one-time road from Rennes les Bains to Bugarch has a reconstructed Roman bridge that crosses the Blanque River. In 1992 the original Roman bridge was destroyed by flooding. Local French stone masons crafted a replica within a year of this historic loss. Photo: Judith, Flickr
by J. Morton Galetto, CU Maurice River

Last week we shared the amazing experiences of many destinations that my husband and I enjoyed in our travels to Barcelona and to the Pyrenees of southwestern France. But I have saved the best for last. As you may know, I’m a bit of a vulture fancier and give presentations about their life history. “Vulture Culture” was featured in the Philadelphia Inquirer and maybe you have read some of my vulture articles. I have seen the white-backed and lappet-faced vultures in Tanzania but not the Eurasian griffon that is found in northern Africa and, yes, in the Pyrenees of southern France. So when my friend informed us that we could travel to a nearby vulture observatory I was jubilant.

In “Vulture Culture,” I relay a story of a 52-year-old woman who fell to her death in the French Pyrenees and within 45 minutes was consumed by Eurasian griffon vultures, something I was not planning on reenacting! However, I worried that karma might bite me, since I have long stressed that scavenging vultures surely saved the family funeral costs, or at very least embalming fees, because all that remained were her bones, clothes, and shoes. These birds rarely feed on anything but carrion, so I decided that if I could stay on my feet it was unlikely that I would be mistaken for lunch.

Concurrent to our restoration of eagles here in southern New Jersey, beginning in the late 1980s France was also embarking on a restoration project of the Eurasian griffon vultures, or in French, le vautour fauve. Much like eagles in the United States, vultures were pursued by hunters and farmers who left poisoned bait out for them. As a result the species was thought to be extinct between 1940 and the late ’60s. So misunderstood.

In 2013 it was estimated that about 500 vultures had repopulated the Pyrenees region as a result of restoration efforts. I’ve not yet found a current number for the Pyrenees but between the Pyrenees and Alps it is thought that some 2,500 breeding pairs exist in France. In my friend’s region, vultures resumed breeding in 2011.

The observatory that we visited was located in the commune of Bugarach, in the Aude, in the heart of the “sensitive natural area.” It was established by the Départmente and the Aude LPO (League for Protection of Oiseaux – birds) and is situated across a road from the Falconniére cliff. At the foot of this summit is a feeding station that to the best of my knowledge was not visible to us. These raptors will feed within about a 15-mile radius of their breeding area.

When we arrived the vultures were perched on the razor-thin cliffs silhouetted against the sky. We watched them take off, soar about, and light back down on their selected precipice at random intervals.

For comparison, these creatures far exceed our turkey vulture’s size, which at its largest is 2½ feet tall and three pounds, with a 5½ to six-foot wingspan. The Eurasian griffons weigh in at 14 to 24 pounds, stand just shy of four feet, and have a massive wingspan of seven to nine feet. They even dwarf our bald eagles’ 10-pound, six- to eight-foot wingspan. Our California condor’s wingspan and weight are equivalent, but it stands as much as six inches taller.

When griffons fly their necks are held in an S-like shape but on the ground they are often stretched out and very prominent. Seeing them perched in rows on the cliff’s summit and in clusters on grassy patches was an awesome sight. It would have been great to watch them eating; they are said to be rather aggressive when competing for a carcass. Their threat displays are most impressive as they try to retain their place on a dead animal.

From the Bugarach viewing area it is possible to see ravens, lammergeier, cinereous and Egyptian vultures, as well as at least eight different birds of prey; we also watched a red kite, which the French call Milan royal.

The service provided by vultures as the great recyclers is irreplaceable and helps to prevent the spread of disease. Their body acids essentially purify dead flesh and their excrement is sterile. In fact, they will evacuate on their legs to cool down, and additionally the uric acid will kill any bacteria that might be contracted when they stand on a carcass. In all instances when vultures have been extirpated from an area it has been considered an environmental catastrophe. So seeing their numbers restored in the Pyrenees where they were at one point extinct is a miracle of sorts. I think I should consider visiting Lourdes more often.

From the observation area there is a great view of the storied Peak of Bugarach. In December of 2012, large groups of apocalyptic New Age believers intended to descend on the small village of the same name at the foot of the mountain. Somehow the location was wrapped up in the Mayan apocalypse calendar and it was believed that aliens lived within the mountain’s caves. The mayor threatened to call out the French military to protect the village and its inhabitants from the influx of doomsday believers who thought that only Bugarach would save them from judgment, since it is considered by some counter-culturists to have doors to other worlds. The reactions of the 190-some residents of the village ranged from bemused to annoyed.

Our trip surely opened doors to new worlds but clearly not to different universes. Keeping our feet and orbits earthbound has proved adventurous enough for us!

As we left our friend’s village we played the U.S. Marine Corps Band’s “Star-Spangled Banner,” allowing folks to know that the Yankees were going home.