Ducks and hawks are winter hallmarks of the Maurice River. 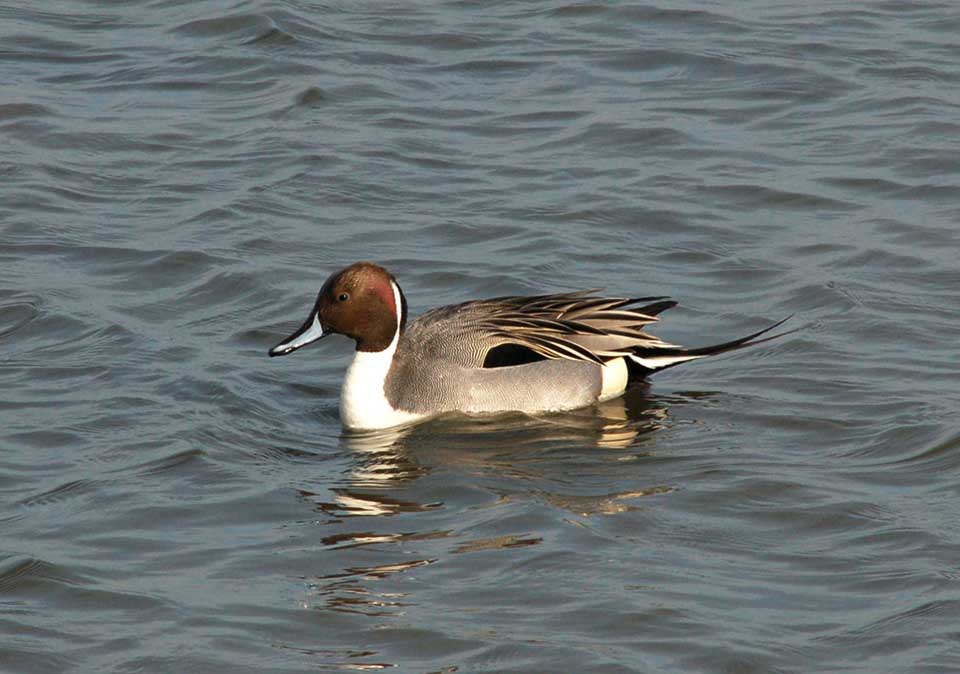 Over time, northern pintails have declined significantly on the Maurice River. Their decline is linked to the diminishing acreage of wild rice, a preferred food source. all Photos by Clay Sutton
by J. Morton Galetto, with Clay Sutton, CU Maurice River

Jim, I’ve got two eagles upriver, chasing each other, over the big pine.”

“Got ’em, Clay. No wait, there’s an immature eagle joining the two adults. They’re really going at it. Oh wow, they just flushed a flock of about 30 pintails, with maybe a dozen mallards mixed in.”

“Great, Jim. There are two red-tails soaring over the Burcham Farm, to the right of that kettle of vultures.”

“And look, about a dozen black ducks coming upriver here.”

“There are definitely more ducks here than last survey. I wonder if they were pushed south by snow up north, or if they’re early spring migrants from the South?”

“Don’t know, but this is looking good!”

When Jim Dowdell and Clay Sutton finished last week’s raptor and waterfowl survey on the Maurice River, they completed their 337th winter bird count on the river, all under the auspices of Citizens United to Protect the Maurice River. These semi-weekly counts on the Maurice date back to December, 1987, an extraordinary monitoring effort now in its 35th winter season. It has been a remarkable run; what began as a fact-finding effort in response to imminent threats to the river soon became a steady monitoring project, one that Clay describes as “taking the pulse of the river.”

He elaborates, “The vision of a few back in 1987 has slowly evolved into what is today an exceptional documentation of the avian resources of the Maurice. This is indeed unique.”

On the surface, the techniques are simple. Nine sites or “point count locations” are sampled during each survey for about 40 minutes per site. The sites cover the 14-mile tidal stretch of the river, from Millville to East Point. All hawks, eagles, and vultures, as well as ducks, geese, and other waterbirds, are tallied at each stop. The more difficult aspects of the counts include a major effort not to double-count birds, and the considerable skills, honed over time, to pick out and identify distant raptors and to estimate the numbers in large flocks of waterfowl.

It is a challenge that Clay and Jim relish. Clay relates, “If there is one thing that makes our study stand out, it is the fact that the same two observers, Jim and I, have been doing this now for 35 years. That leads to an amazing continuity and quality of data. Observer bias, including subtly different count methods and skill sets, can skew a study. I’m not saying we don’t have our own biases, but they have been the same for 35 years. That is what makes the data comparable, both week to week and year to year, because we have been doing it the exact same way for all these years. That is how we can determine true changes over time.”

That is what has made this CU Maurice River raptor and waterfowl analysis unique. There are very few studies in the Delaware Estuary that share such longevity. It is long-term monitoring such as this that serves as a long-term indicator of the health of the river and Delaware Bay.

As one might expect, the findings over time have been mixed. There are some real success stories. Bald eagle counts in this study have soared like the birds themselves. Daily counts of two or three per survey in the early years have increased to an astounding 25 to 35 eagles per survey in recent years. The record, the peak daily count ever on the Maurice, is 58 eagles. Vulture numbers have greatly increased as well. Other raptors, including peregrine falcon, Cooper’s hawk, and red-shouldered hawk, have seen modest yet steady increases.

The northern harrier, still known to many as the “marsh hawk,” is a hallmark raptor of the Maurice River and the Delaware Bayshore. While it can still be seen daily and in numbers, a disturbing trend of this long-term research has been the decline of harriers. After increasing slightly for many years, the count of harriers has shown a sharp drop in the last decade. The researchers link this to sea level rise, and particularly the severe damage to Bayshore habitats by Hurricane Irene in 2011 and Superstorm Sandy in 2012. These events, and subsequent frequent inundations from storms and moon tides, have greatly diminished the populations of the marsh rodents, meadow voles, and rice rats, that are the preferred food of harriers on the Bayshore marshes. Red-tailed hawks have been similarly impacted, with vastly fewer numbers seen in recent years than in the first 20 years of study.

Duck numbers on the Maurice River have decreased steadily over the 35-year period of study. Mild winters that allow many ducks to remain north of us, or depart earlier in the spring, combined with the loss of favored wild rice marshes due to erosion, increased salinity, and Phragmites (common reed grass) encroachment have reduced their presence considerably. Daily counts of thousands of black ducks, mallards, and northern pintail in the early years of the study have been replaced by counts of only hundreds in recent winters. Happily bucking this trend are the green-winged teal and some of the diving ducks, whose numbers have slowly increased.

If there has been one constant over the 35 years of study, it is change. The great ornithologist and artist Roger Tory Peterson once said, “It is like the balancing of a ledger. There are debit birds and credit birds.” We have seen many gains and many losses on the Maurice River over the 35 years of monitoring. We live in changing and often challenging times. But there is one great positive factor to remember, that for the Maurice River we have a valuable long-term data set by which we can monitor these changes. And with this in hand, we can work to reverse negative trends and encourage and support positive trends. Our strong baseline gives us a powerful tool for planning, funding, and implementing projects to restore the habitats on which the raptors and waterfowl depend.

Another constant over the years, and one that holds true today, is that although there have been many shifts, gains, and losses, the Maurice River can still be a place of wonder.

“Big flock of bufflehead here in the impoundment, Jim.”

“OK, I’ll count them. Clay, you scan Basket Flats for the flock of scaup. Oh, cool, this bald eagle just grabbed a big stick; taking it to the nest. Yes, there’s the second eagle, the mate. And two more over the tree line!”

“Great, Jim. And I’ve got two, make that three, harriers out towards East Point. All right!”

And so it goes for Jim and Clay. Another day at the office. Just another amazing day on the Maurice. Happily counting raptors and waterfowl. Like they’ve been doing for 35 years.