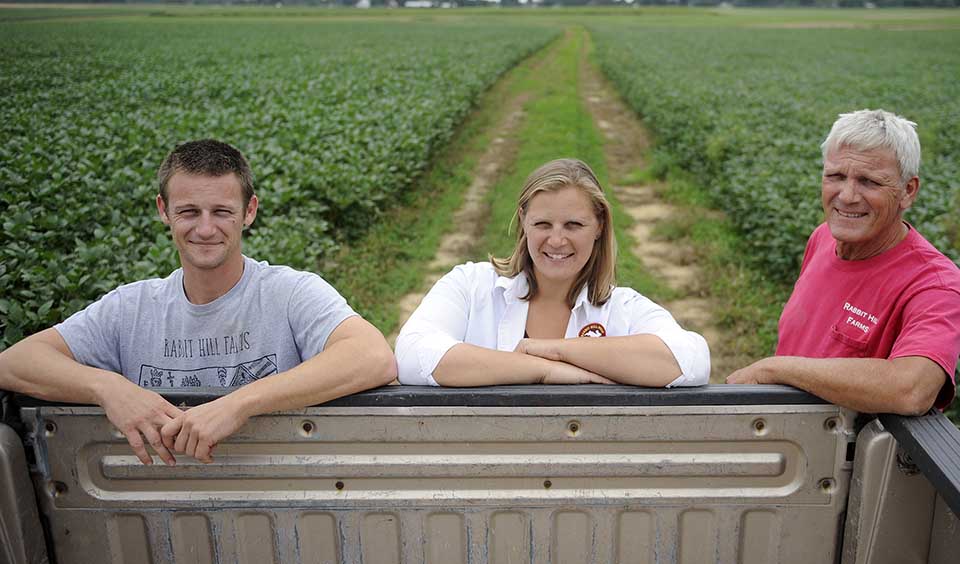 Barile, with the support of husband Jeffrey, owns and operates Rabbit Hill Farms in Shiloh along with her father Abe Bakker, brother Blair Bakker, and her uncle Robert Reed. She was one of four national winners selected from a group of eight finalists for the 2021 award based on their progress in an agricultural career, extent of soil and water conservation practices and contributions to the well-being of the community, state, and nation.

“It is very humbling to be selected as there were so many other wonderful candidates,” Hillary Barile said. “We understand the work it takes to be successful in agriculture and it is truly special to be recognized in this way.”

The winners received a savings bond from corporate sponsor John Deere and the opportunity to travel to Washington, DC, during National Ag Week in 2022.

“We are very proud of Hillary for being an outstanding representative of New Jersey on the national agricultural scene,” NJDA Secretary of Agriculture Douglas Fisher said. “Hillary’s ability to create a new vision for her family farm is a credit to her and an excellent example of the ingenuity and innovation that so many farmers in our state possess.”

Hillary Barile grew up on Rabbit Hill Farms, originally located in central New Jersey. After graduating from Dartmouth and working in the agricultural field, she decided to return to the family farm in 2010. The farm relocated to Shiloh and after evaluating its viability as primarily growing potatoes, it switched to growing barley for malt and building New Jersey’s first craft malthouse. It was a decision that didn’t come easily, given some financial risk and the family tradition, but one Barile is glad they made.

“The accelerated growth in the craft beer and spirits industry nationwide was hard to ignore and in 2012, New Jersey made some changes to support growth in this industry,” Barile said. “Rabbit Hill briefly considered starting an on-farm brewery to capitalize on the consumer interest in craft beer … as I researched what was required to make beer on the farm with our own ingredients, I learned more about the main ingredients in beer. Malt, an ingredient in beer and spirits, is predominately made from certain varieties of barley. The quest to make malt for ourselves led me to conclude that there is a market for locally grown and craft malted barley in our state.”

Barile says the switchover wasn’t easy at first. Even with extensive research, there was no model to know which grains to grow that would be good for malt. But after some experimenting, they found the right combination.

“We were unsure if we would even be able to produce the high-quality grains that we needed to use in the malthouse as there was very little information available regarding their agronomics in this region,” Barile said. “It has taken years of trial and error to begin to produce these grains reliably. With the knowledge that I have gained over the last few years, and the clarity of hindsight, I can easily say now that we made the correct decision.”

Jeffrey Barile has his own separate career and Hillary points out he is very supportive of the farm’s endeavors.

“While he did not grow up on a farm and does not work on the farm, he has been incredibly supportive of my decision to return to the farm as well as the decision to dramatically change the way that the farm operates,” she said. “These decisions have significantly impacted our family life and income as we are only five years into a huge reinvention of the business.”

The 2021 National Outstanding Young Farmer (NOYF) Congress was postponed and was combined with the 2022 NOYF Congress, where winners from both years were announced.