Many towns have adopted their own jaw-dropping versions of counting down to a New Year. 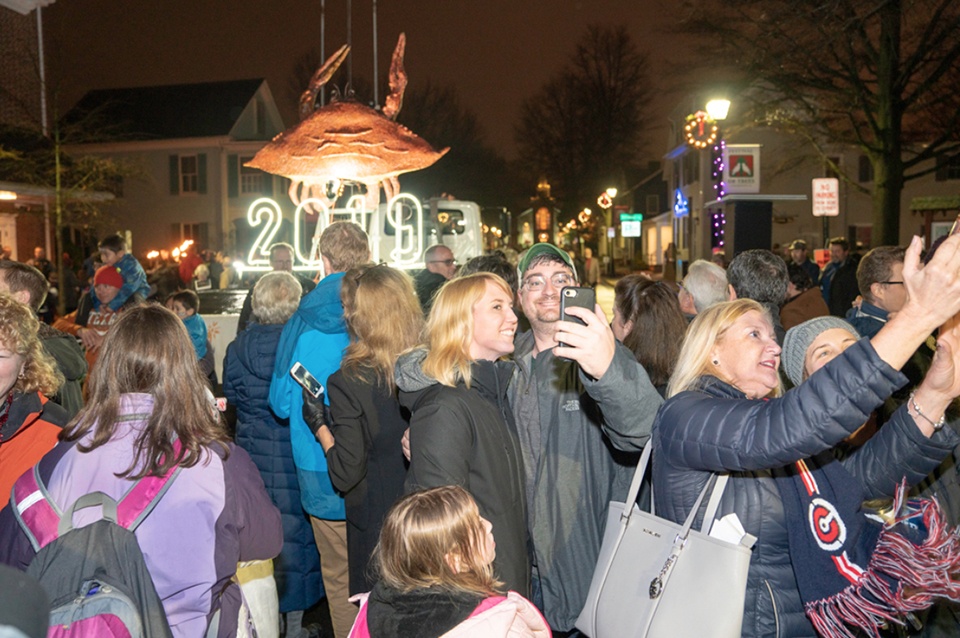 If you recall, as part of my article about opossums last year my tale took a strange turn when I discovered that at least two towns drop opossums in celebration of New Year’s Eve. At that time I found out that there was also a pickle and flea drop in North Carolina. 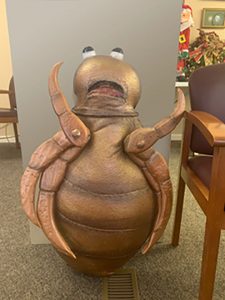 on was to write about the flea drop for 2021, and now that seems fitting as all of us are getting itchy from pandemic cabin fever. My articles have been primarily about local creatures and culture, but oddities like dropping animals have come up as random trivia.

However, as I delved into the dropping of items on New Year’s the topic seemed to expand into a full-fledged “thing.” It turns out that on the all-knowing internet one can find all manner of news articles about dropped objects. The ball at New York City’s Times Square is apparently the most famous of these, and it has inspired many towns to surrender their own array of articles to the forces of gravity.

But many towns drop things that have to do with their heritage, sometimes including a manufactured item. I was astonished to learn that the town that is home to my alma mater, Elizabethtown, Pennsylvania, was dropping an M&M. This was news to me, since I left Elizabethtown as the 1980s rang in and the event didn’t begin until 17 years later. The Mars factory is located in E-Town, home of the Dove Bar, which has apparently made a few downward trips itself. But evidently in 2015 the event was suspended. Just my luck—people throwing around chocolate and I find out too late. Clearly no one would risk dropping such goodies in my presence!

So I thought that in keeping with my nature theme and the much-awaited change of the calendar year I would discuss a few of the drops related to an area’s natural heritage. A number of towns celebrate with some of the same wildlife that we find here in Cumberland County, New Jersey. In fact, the flea drop takes place in Cumberland County, North Carolina.

The town of Eastover celebrates its original name, Flea Hill, by dropping a larger-than-life multimedia flea named Jasper, constructed of wood, foam, cloth, and ceramic, as best I can determine, to the delight of its 3,700 residents. Located on the east bank of the Cape Fear River just across from Fayetteville, North Carolina, its Mayor McLaurin relays that in the late 1700s/early 1800s their regional churches were constructed high above the sandy soils on pilings, versus on a grounded foundation. Farm animals would seek shelter under these buildings. And, as the story goes, their local church once suffered a great flea infestation. Travelling gypsies suggested placing walnut leaves on the floor to end the plague, and it is said to have worked. You may recall from prior articles that juglone is a natural chemical in walnuts that acts as a herbicide to a lot of flora, but it also has some limited pesticide qualities. Eastover was finally incorporated in 2007, and I do not know how long before that time it stopped calling itself Flea Hill, but the drop commemorates its original name.

Now that I have kept my promise to the readers to look into the flea drop, it raises the question, “How did the passage of time and falling balls get linked together?” In 1833 England’s Royal Observatory at Greenwich installed the first “time-ball.” Each afternoon at one o’clock the ball would drop, allowing ship captains to calibrate their chronometers. This is said to have been so successful that 150 time-balls were installed around the world, although few are still operable. The U.S. Naval Observatory in Washington, DC continues to honor the tradition by dropping a time ball down a flagpole each day at noon.

The New Year’s Eve Times Square festivities date back to 1907/1908 when the parapet of the Times Tower lit up displaying “1908,” in conjunction with the falling ball. Exceptions to the custom occurred in 1942 and 1943 because of wartime blackouts. On those years trucks equipped with chimes rang in the New Year. The original ball was used from 1907 until 1920. It was five feet in diameter, made of iron and wood, and adorned with 100 25-watt bulbs. Metalworker and sign manufacturer Jacob Starr constructed it and was responsible for lowering it for most of the 20th century. Over the years since 1920 there have been other variations on the design and various replacements. As best I can determine today, the building owners of One Time Square have now permanently affixed a six-ton 12-foot diameter ball festooned with nearly 2,700 Waterford crystal triangles illuminated by 32,000 LEDs.

Times Square seems to be the inspiration for the dropping of various and sundry objects. Many are not reliable occurrences but rather news stories I found recording such efforts. My favorites are the items made in acknowledgement of creatures that play a part in a town’s heritage.

Key West, Florida, has a conch drop that competes for attention with a well-known drag queen who is lowered in a ruby red slipper; is that really a contest?

Georgia is seriously into animals, with ’possums and fleas… got to love Georgia! North Carolina has a ’possum drop too. Gainesville, Georgia has Chuck the Chicken, who raises money for the humane society. Game on, Cumberland County! I’m sure my favorite will be Perry, that lowers a buzzard, who sports the same attire as Marshall.

Raleigh “The City of Oaks,” North Carolina has a 900-pound copper and steel acorn, in my opinion the classiest object of all. Flagstaff, Arizona also drops a pine cone.

Port Clinton, Ohio has Wylie Jr. the walleye. And Cincinnati has a flying pig, flown not dropped; you’ve got to love that.

Beavertown, Pennsylvania, Bucky of course. Boyertown has lowered a bear since 2010.

New Jersey, you ask? Well, Hammonton, self-professed “Blueberry Capital of the World,” has staged a Blueberry Ball Drop for the past few years, and Point Pleasant had a “Millennium Mossbunker” in 2000. Embarrassingly enough Seaside Heights lowered Nicole Polizzi—Snooki’—of reality TV’s Jersey Shore fame in 2011. For those of you who don’t know what Jersey Shore is, ignorance is bliss.

Last year when I wrote about the ’possum drops our editor asked, “Is that a thing?”

“Apparently,” I replied. We were both so naïve.

With all these drops I’m unlikely to run out of material for years to come.