A funny thing happened on the way to The Levoy: A millennial comic teamed up with a Gen-X comedian. 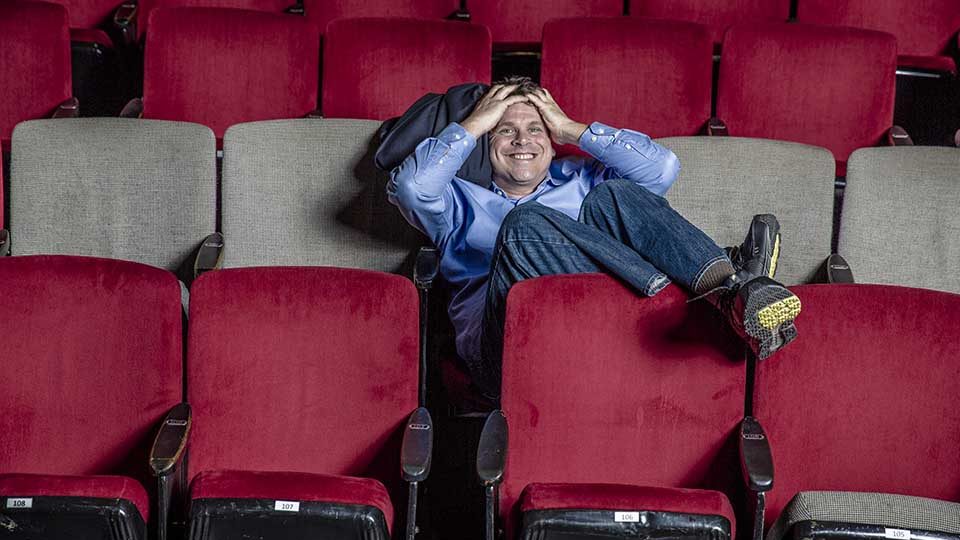 Gen-Xer Marc Price, above, and millennial Eugene T. Barnes, below, comprise the Multigenerational Comedy Experience, playing at The Levoy on Friday, December 2.
by William Sokolic

After a few guest appearances on sitcoms, Marc Price landed a goldmine of a supporting role as next door neighbor Irwin “Skippy” Handelman in Family Ties. Price appeared in more than 50 episodes during the seven-plus year ’80s run which made Michael J. Fox a star.

Since the show ended in 1989, Price has carved out a varied career including as a standup comedian. He plays around 50 dates a year, some solo, some sharing the stage with other comedians. On December 2, Price will play the Levoy Theatre in Millville along with up-and-coming comic, Eugene T. Barnes. The evening is billed as a “Multigenerational Comedy Experience” pitting a Gen-Xer against a Millennial in a comedy showdown.

Price takes the role of Gen-Xer and Barnes the Millennial. Price does an hour set, Barnes a half-hour. The billing promises whether you’re a Millennial, Gen X, or even a Boomer, you will be “mocked ruthlessly.” The show is geared for parents and their adult kids. But if your children are not old enough to vote, best to leave them home. Enough on that matter.

That Price would end up in show business was a no-brainer. His bloodlines in the field run deep.

His grandfather, Lou Price was a theatrical agent. His dad, Al Bernie (real name Alfred Bernie Price) was a comedian and song and dance man, who worked in radio with Fred Allen and appeared on the Ed Sullivan Show. His mom, who went by Joy Mann, was a singer in the 1960s.

“My dad brought me to comedy clubs when I was young,” says Price. “The concept was still new at the time, but that was the direction they were moving in.” The younger Price hung out backstage with Milton Berle, Joey Bishop, and Don Rickles. His father also worked the first integrated show in Montgomery Alabama, with Ray Charles and the Shirelles in 1963 to publicize the upcoming march on Washington with Martin Luther King. Jr.

Price, who moved from New Jersey to California when he was 12, co-starred in feature films like Trick or Treat with Gene Simmons and Ozzy Osbourne and Killer Tomatoes Eat France, as well as some shorts. He hosted game shows such as Teen Win, Lose or Draw for Disney.

In the 2000s, Price made his mark as a writer and producer for diverse networks such as E!, TBS, Disney Channel, Animal Planet, GSN, Showtime and more. During the pandemic, he hosted a radio show in Daytona Beach with an ’80s format.

This year Price is the spokesperson for the Insurance King and has a couple of TV projects in development.

Comedian Barnes hails from New York City. He’s been featured at some of the city’s biggest clubs including Caroline’s on Broadway and Gotham Comedy Club. Eugene has also played clubs and colleges around the country.

“I’ve been doing comedy for seven years now, full time for six,” Barnes says. “I got laid off of a day job about five years ago. I went to my wife (who was pregnant with our second child at the time) and told her I wanted to do comedy full time. She agreed. I’ve never looked back.”

Barnes will tell you that he’s good at one thing—comedy.

“I wasn’t the best student, and I was never good at sports. I was the guy cracking jokes on the basketball court,” he says.

Touring with Price is a first for Barnes. “He has been gracious enough to take me under his wing. I’m learning a lot about the art and business of comedy.”

Multigenerational Comedy Experience is just one approach Price has for his touring schedule. Others include tours with offspring of entertainers like Mindy Rickles and Rain Pryor. He’s also done dates with Paul Rodriguez.

Price still hopes for another sitcom. “They’re not easy. I pitched one with Robert Guillame, who played Benson” the title character of another 80s sitcom. It wasn’t accepted.