Baseball is back for area’s Challenger League, and it’s an all-around win—for players, spectators, and ‘buddy’ athletes. 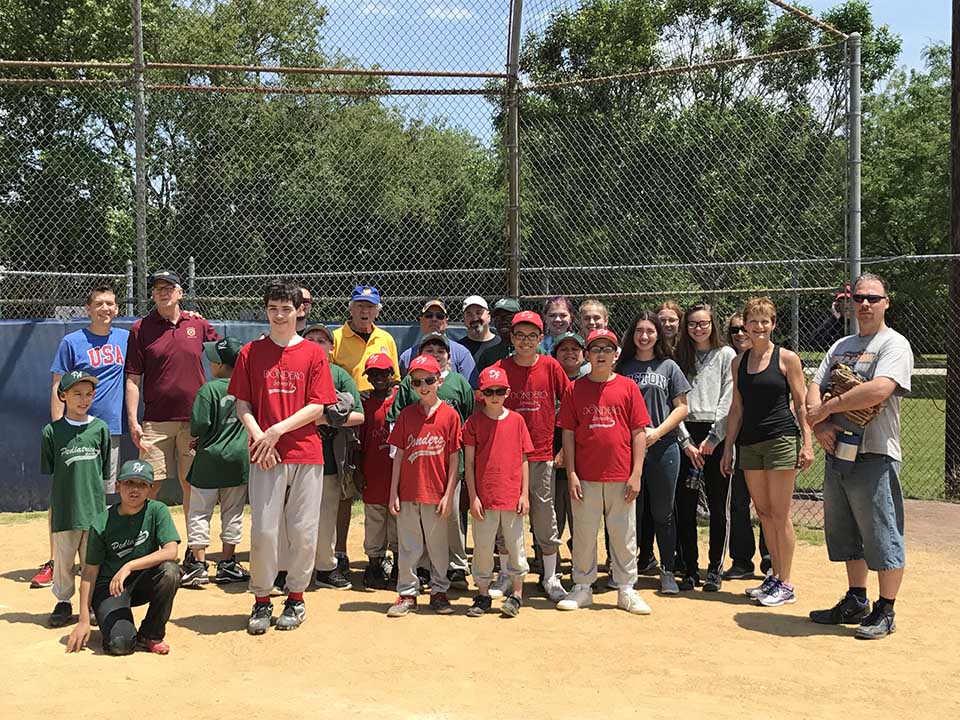 Rotary built it and they came back. Came back from Carney’s Point, from Rio Grande; from Salem, Gloucester, Atlantic, Cape May, and, of course, Cumberland counties to play on the fields inspired by the Vineland Rotary Club.

After two years of no baseball due to Covid, the Challenger Division of North Vineland Little League will have Opening Day on May 7. Registration is open until Saturday. The league is for non-traditional players, those challenged by some type of disability.

Teams are set up according to how players can perform rather than their age. Each player gets a chance at bat every inning and no score is kept. Uniforms, safety equipment and insurance are the same as for other Little League divisions.

There’s no fee to join Vineland’s Challenger Division. And, now, it doesn’t matter how old you are.

“We started a senior division; right now there are two teams,” said league president and long-time Rotarian Joe Delgado, who helped create the league almost 15 years ago. “It starts for age 15 and goes to any age, you can play if you’re 70.”

The regular division has eight teams, which play every Saturday for nine weeks in doubleheaders on two fields.

“I’ve been seeing these players since they were five years old,” Delgado said. “Once you see the kids playing and how much fun they’re having and what it means to them, you just fall in love with it.”

Not surprisingly, after years of participating, some Challenger Leaguers have gotten pretty skilled.

“Some of them have learned to be good hitters,” said Lisa Tobolski, also a pioneer of the league and its coordinator of volunteers. “Sometimes I have to say ‘Everybody back up quick.’ That’s a warning to be careful.” Tom and Lisa Tobolski’s son Matt is, among many other things, a high-functioning person with Down syndrome and has played in Challenger for years. He is well known around the league and the community and, at 28, is one of the oldest players in the senior division.

Players’ physical and mental disabilities range from mild to profound, but they come to play because it feels wonderful to do it. Some are in wheelchairs or walkers; some hit the ball off tees; coaches pitch to others. They field, throw, run, and cheer, each to their own ability and each treated as an equal.

“We have kids who hit line drives and kids who try to run out and catch their own hits, it’s all good,” said Tobolski.

The enchanting story of Challenger League didn’t begin with the usual building of a field. It began instead with the building of a clubhouse first, in the mid-2000s.

The modern building has a large meeting room, office, equipment storage, accessible locker rooms and restrooms, and a well-equipped kitchen and concession stand. It was built to help challenged youngsters play ball by providing handicapped-accessible facilities.

Dr. Albert Marsh, who had championed the project for years as Rotary president, made a large initial contribution, as did the Rotary Lunch Club Fund. The City of Vineland provided state Green Acres funding. The act of opening the clubhouse stimulated the efforts to build a successful Challenger Division and within a few years the first games were played.

”The league exists because of Dr. Marsh’s vision,” said Delgado. “We took it the rest of the way. Without the building there’d be no league.

“There have been a lot of people getting us to where we are today. To make it successful you need parents with a vested interest to be involved in management of the league and be able to donate enough of their time. We have that.” Challenger also has “Helpers,” some believe they are the soul of the game. And most of the helpers are themselves baseball players.

Every week in turn, baseball and softball teams from area high schools take the field along with the boys and girls in the lineup. They are in uniform. They come for love of the game and compassion for these special kids. It also doesn’t hurt that their coaches like it.

“Buddies are wonderful, the players look up to them so much,” said Tobolski. “They think they are the Phillies.”

For their part, the high school players get to see their sport with a different perspective from their hard training, pressure to perform, victory and defeat.

“It’s an eye-opening experience for everybody. They learn that our kids are just kids who happen to have a disability,” said Tobolski.

“To help them be the best ‘buddy’ they can, be we tell them not to field a ball for the player, maybe just stop it, or kick it in their direction,” she went on. “The ultimate job of the buddy is just to make sure the kid doesn’t get hit with the ball.

North Vineland Little League shares the clubhouse and is an avid partner in operating the Challenger division. The City of Vineland is a big supporter.

The league always needs volunteers and promises that eye-opening experience.

Any physically or mentally challenged boy or girl is eligible to participate. Players may live in Cumberland, Salem, Gloucester, Cape May or Atlantic counties.

Forms can also be mailed to Vineland Challenger League at 3637 Oak Rd., Vineland NJ 08360. All completed registration forms should be received no later than Saturday April 16.

For additional information, call: Joe at 609-381-0450 or visit vinelandrotary.com/challenger-league