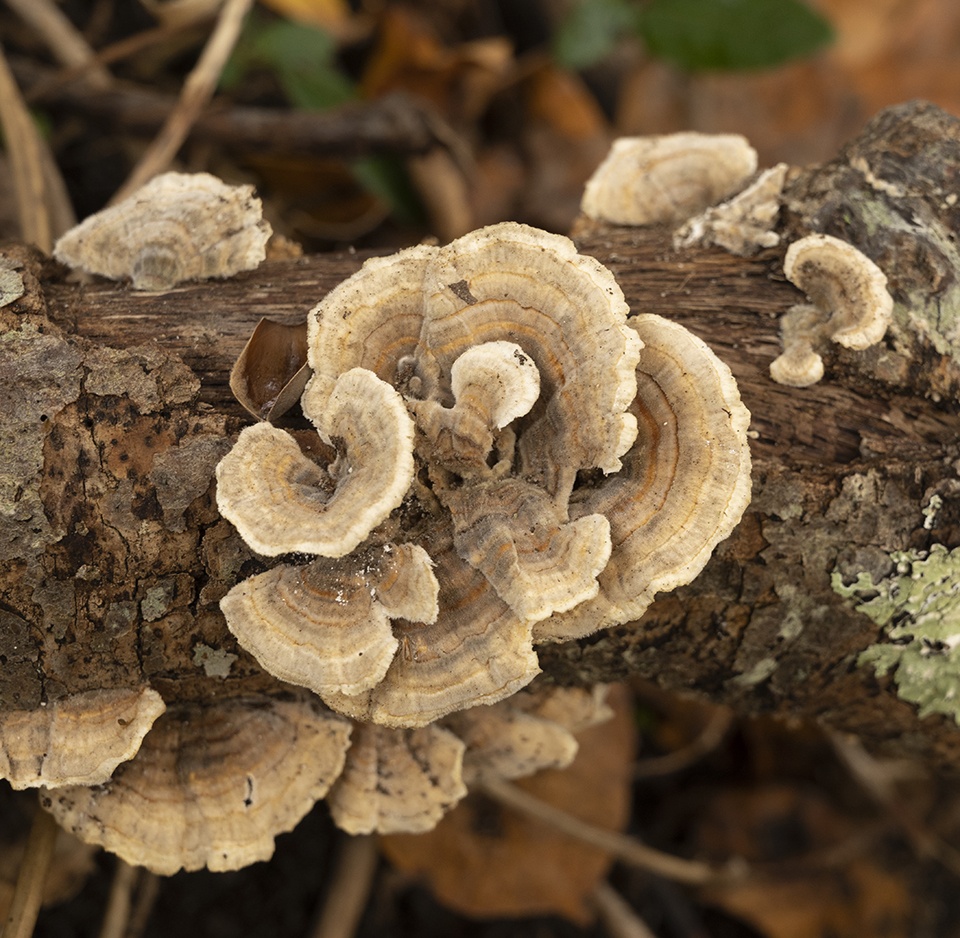 In anticipation of the upcoming holiday I’ve decided to talk about one of our most common fungi, turkey tail, a shelf or bracket fungus. Its name comes from the concentric rings in varying shades of brown on its fanned upper side, resembling a wild turkey’s tail. Its scientific name is Trametes versicolor, versicolor meaning “of several colors.”

Turkey tail’s spore-producing reproductive structure is called a conk, which is the visible fanned portion above the ground with multicolored stripes in concentric arcs. These colors are extremely variable—beige, cinnamon, orange to brown, and reddish to purple hues. The semi-circular rings are usually well defined. The upper striped side of the conk is covered in fine hairs that are velvety. The underside is white and covered in pores that hold its reproductive spores, gills that are more common to other mushroom fungi.

This variety is tough and leathery compared to other fungi. It can be eaten but is not tasty, and most field guides call it inedible. However, extracts, teas, and other compounds are made from it, primarily for alternative medicines. We will revisit that later.

The pores place it into a family called polyporaceae or polypore fungi. These small tubes on the underside are hard to see with the naked eye but appear at two to five tubes per millimeter, so they are really tiny.

The conks are not limited to a specific time of year. Most of the organism’s life is spent beneath the surface in a dikaryotic state—a cell, or a cell with two nuclei, one from each parent. It is a common mushroom throughout North American woods, with a worldwide distribution. It is found on decaying trees, stumps, and logs. It is a saprophyte in that it obtains its nutrients from other organisms, normally hardwoods. Turkey tail is a decomposer, taking nutrients from dead wood and turning them into soil. It uses the woody lignin from the trees’ cells faster than the cellulose, creating stringy “white rot.” Decomposers that break down cellulose more swiftly create “red rot.”

Turkey tail has been identified on 70 species of trees. I have seen it on oaks, cherries, birch, maples, walnuts and others. It can occur on conifers but it appears more commonly on hardwoods.

For centuries people have used turkey tail mushrooms as a health supplement. Yun zhi is a traditional Chinese medicine for respiratory conditions that derives from turkey tail.

Today there are a host of researchers who have been studying the fungus for its potential health benefits. Trametes versicolor produces polysaccharide K or PSK, used in conjunction with traditional treatments for skin, colon, and breast cancers. There are numerous journal articles resulting from studies that look at its efficacy for cancer treatments and immune-response enhancement. Extracts from the mycelium or main organ of fungus that lies beneath the ground have been used in many human clinical trials. In fact, in Japan PSK is an approved drug paid for by the country’s national health care system.

A number of clinical trials demonstrated that, used in conjunction with chemotherapy protocols, it extended patient survival rates by five to 10 years, especially in stomach cancers. Most studies suggested that more research is necessary to determine doses and what specific extracts from the mycelium have the greatest effectiveness (University of Berkeley, C. Rollin Hobbs- Research Gate). There are further claims of probiotic health, helping the bacteria in your gut to achieve a good balance.

Homeopathic health merchants sell turkey tail dietary supplements, suggesting its use as a prebiotic for your microbiome (bacteria in your digestive system). A prebiotic is a compound in food that induces the growth of beneficial organisms in your gut, while a probiotic is a living bacteria that confers a health benefit, thus enhancing your immune system. There is a host of research about the relationship of gut microflora to diseases and disease prevention and scientists are continually unlocking new information.

Some limited research has suggested that protein-bound beta-glucan (PBG) found in turkey tail can prevent obesity. Now you may be thinking about using a turkey tail supplement after this year’s turkey feast in an effort to battle the holiday bulge. In my case that would be too little too late.

Needless to say, before using any supplements know they can be contraindicated by medications you are prescribed, and also may not support any of the numerous claims that are made. I simply share this information to expand your imagination on our topic and our natural world.

One thing is for certain: A number of people are researching the efficacy of turkey tail for treating ailments. More than 50 percent of the medicines we now use are based on organisms found in nature. Today’s research of the earth’s biodiversity is continually generating new leads for tomorrow’s health, and for this we can be thankful. Happy Thanksgiving!

Like me, you might be wondering how to tell turkey tail fungus from other fungi that look similar at first blush. You’re likely to see it on your next stroll into the woods as well as its local lookalikes. Here are some clues for distinguishing it from two other shelf-like fan-shaped bracket fungi.

False turkey tail, or Stereum ostrea, has the multicolored zoned rings but a smooth underside “without” the pores. Appears year-round. Its underside is colored buff, rusty or even a leathery brown. It is a crust fungus. Conk width 1/2 – 4 inches.

Violet toothed polypore, or Trichaptum biforme, is fan-shaped but its underside is rough and toothed, it too is a polypore. Appears year-round. To my eye it looks like hundreds of mini-stalactites hanging from the ceiling of a cave vs. the tube-like pores of turkey tail. Under magnification it looks maze like. The underside and margin have a violet appearance. The violet ranges from obvious to not very noticeable depending on the freshness of the specimen. Conk width 1/4 – 3 inches.

Turkey tail, or Trametes versicolor has the concentric rings, feels a bit velvety or hairy on the topside, and is a polypore with a creamy underside. The ring on the margin is always the lightest colored ring. Naturally if it is decaying the underside will be darker. The pores look like hundreds of tiny tubes that are not easily detected. Conk width 1 – 4 inches.