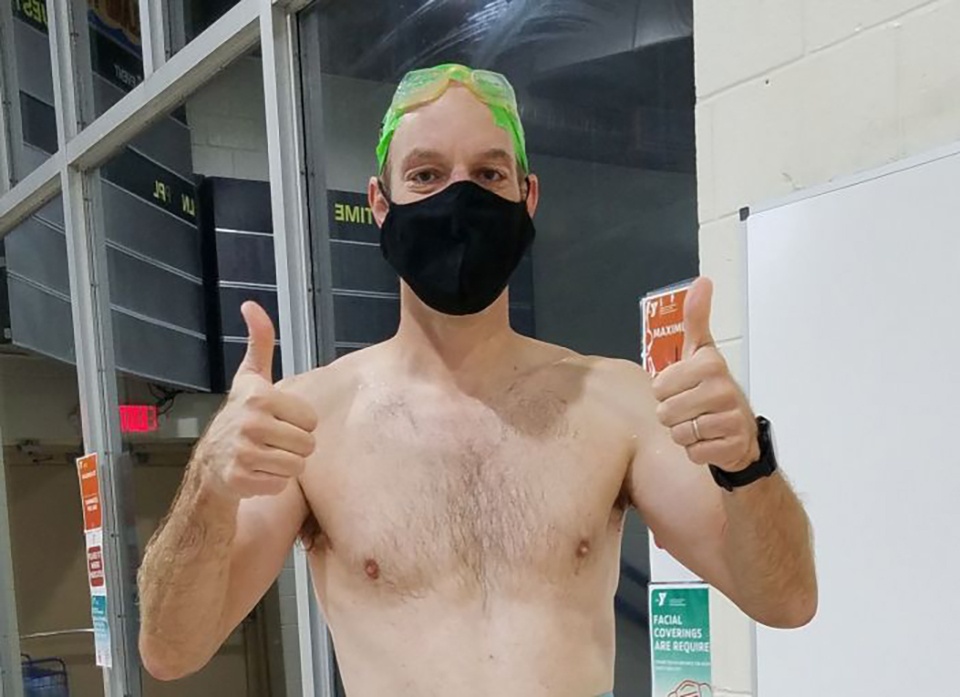 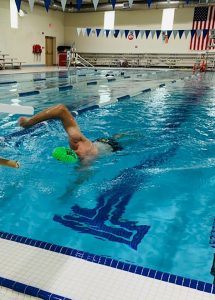 Fabien Klimsza is a genial, busy family man and a corporate executive, but he is also an accomplished athlete. The 44-year-old Vineland resident recently completed the rigorous Hawaii from Home Triathlon. The Cumberland Cape Atlantic YMCA was a springboard for this formidable endeavor.

Klimsza is the chief financial officer at Durand Glass in Millville. A native of France, he gained education and work experience in the USA, plus in France, for Durand. In the current seven-year stretch of residing in this area, he has maintained a regular exercise schedule.

“I’ve been running for a long time, and I eventually developed back problems,” he said. “My doctor suggested that I include swimming on my calendar, so I began doing that at the YMCA.”

His first steps were to take swimming lessons to improve his form in the pool, which he found very helpful. He also includes regular strength training and yoga in his regimen; he has added Spinning classes to prepare for triathlons.

“With the help of the Y, I’ve been able to complete other triathlons,” he said. “The swimming, yoga, and strength training especially added to my fitness. The staff in all areas has been key for me.”

The renowned Hawaii Ironman race is held every October. Because of COVID-19, this year’s event was its first virtual event. Preregistered participants had from this October 5 to 11 to complete the legs. Klimsza swam at the Y’s Kontes Pool for his first leg on that Monday. This was a distance of 2.4 miles.

He said, “This was my first time at that distance. The Y staff was at the pool—they took pictures, clapped, and made it fun. After that, I felt better than I’d thought, so I did the biking the next day. This was tough, especially because I was by myself.”

He completed the 112 miles in six hours. By that Saturday, he was ready to tackle the run.

“That was the hardest,” he explained. “It was only my second time at that distance, and I was alone for that, too.”

With that final effort (26.2 miles), he had completed the Hawaii at Home Triathlon.

“I’m very appreciative of all that they do [at the YMCA]. They went above and beyond to help me, but they also offer so many programs in so many areas to promote healthy living,” Klimsza noted. “The public should know what a great facility we have right here in Vineland. It’s not only for working out, but it’s for families, kids, nutrition, diabetes, and many other programs.”

George Steinbronn, Jr., CEO of the YMCA, praised Klimsza: “Fabien is a wonderful example of an excellent athlete making use of the Y’s facilities and expertise. He is also very popular with not only the staff, but with other members, too.”

For Klimsza, exercising at the Y is a family affair. His wife, Helene, takes Zumba classes; their daughter, Pauline, takes yoga; she and her brother, Julien, have taken swimming lessons; and younger twins Blanche and Adele have accompanied the entire family to many events at the Y.

As he looks back on this triathlon, his latest athletic endeavor, Klimsza is typically modest. He noted, “I have great respect for anyone doing a full Ironman: that’s a real accomplishment.”

Everyone agrees that a virtual triathlon like his is also a fabulous feat!