Larval stage chiggers have hatched and lie in wait on vegetation to hitch a ride from you. 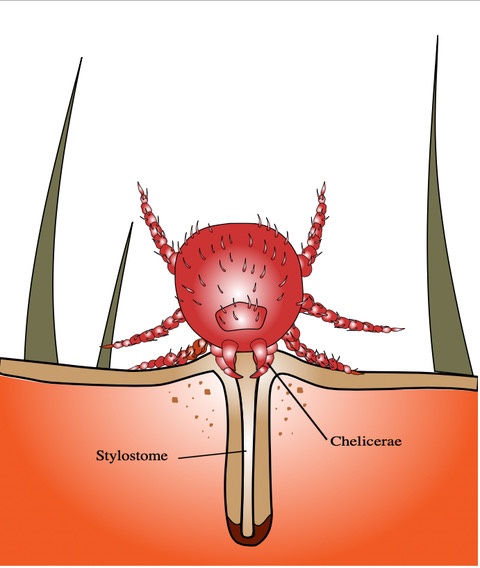 Chiggers do not burrow under the skin; chelicerae are pincerlike claws on a arachnid. Stylostome is a strawlike structure made in response to a chigger bite.
by J. Morton Galetto, CU Maurice River
Photography by Bugboy52.40/Wikimedia Commons

Possibly you are hosting a gathering of uninvited guests after a walk in the South Jersey woods, especially in August and September when our famous party crashers decide to take their own stroll up your legs to uninvited locations. Yes, the notorious larval stage chiggers have hatched and lie in wait on vegetation to jump aboard and visit your very own personal real estate. It gives me the heebie-jeebies just thinking about it.

Chiggers do not burrow under your skin. At 0.5 mm, they simply are not visible to the unaided human eye. They attach themselves to a pore or hair follicle and inject a digestive enzyme. The enzyme ruptures the cells and the surrounding skin forms a sipping straw of sorts to access your cell’s fluids (not blood as ticks do). The bite will continue to itch and annoy you for a few days. The good news is that chiggers are not presently associated with the spread of diseases like their fellow phylum Arthropoda ticks, although both are mites.

They prefer moist conditions, thus they often end up where clothing is tight and at areas where your flesh rubs against flesh—the groin and armpits. And here is the most important piece of advice I can give: “Don’t scratch your itch.” Tell that to the bride who has placed a chigger-infested crown of Spanish moss on her head for those lovely wedding photos among the live oaks in our country’s more southern regions. Fortunately, I was married in southern New Jersey, because my curious nature has led me to examine the moss in Savannah, Georgia, resulting in a St. Vitus’ dance for the following three days. Scratching the sites irritates the area and can cause a secondary infection that adds insult to injury, which is true of most insect bites. By the way, most varieties of mosquito bites will stop itching in 45 minutes if left alone.

Sidebar tip of the day: If you’ve been bitten by a greenhead fly, hold ice on it for 10 minutes; when it starts to hurt again a few minutes later reapply and voilà.

There are ways to avoid getting chiggers and these same tips apply to ticks. First, I would not advise simply staying out of the woods. Our aunt acquired a tick on her highly manicured sod lawn and it transmitted Lyme disease to her. Fortunately, she got the symptomatic bull’s-eye rash, alerting her to the presence of the disease. My point is that you shouldn’t cheat yourself out of nature’s wonders simply due to fear of a peril that you may face anyway. However, in fairness I should add more manicured habitats will help you to evade chiggers.

So those of you who enjoy nature should stick to the path and avoid grasses. On our walks at CU Maurice River, we often stay on paved paths and use park roads or isolated lanes during the height of chigger season. Wear light-colored clothing that will make ticks more obvious. Also put on loose-fitting garb. Some folks swear by tucking their trouser bottoms into the tops of their socks. Also spray shoes, pants, and socks with a repellant. DEET works for mosquitos and helps discourage ticks and chiggers; use products with 100 percent DEET. There are many manufacturers, but I like those that are nearly odorless like Ben’s and Sawyers. These also come in very small sizes for your pocket or pack.

In my opinion, for ticks and chiggers permethrin is more effective than DEET. Spray permethrin on your clothes, ideally the day before you venture out. This allows it to dry and be less likely to contact your skin, and drying makes it nearly odorless. I spray my garments outside in a windless area and it’s effective up to two weeks. Repel works very well and I assume that Ben’s likely does the job, too. I normally keep a pair of treated pants on hand and spray my shoes pretty often. Permethrin comes from the chrysanthemum flower and naturally repels insects, but cyanide and arsenic come from nature, too. My point is that these are very strong products, so be sure to follow instructions and also avoid breathing them in.

Let’s assume that, like me, you aren’t always wearing toxic clothing, or that the beasties have gotten past your best defenses. And now you itch like crazy. Here are some tips. Remove mites as soon as possible. Ticks in particular are less likely to transmit disease the earlier they are detached. One trick for walking mites is tape; you can often remove them much more efficiently and also seal them up in it.

If you have a really bad case of chiggers our pharmacist advises getting in the shower and washing head to toe with a shampoo that is used for head lice (follow the instructions on the bottle). Clothing can also reinfest you, so be sure to wash everything you’ve worn after being out-of-doors, especially if you know you’ve acquired unwanted tenants.

Remember: do not scratch bites! An age-old remedy for chigger bites is nail polish. It doesn’t kill the chiggers or smother them as some folks contend; instead it blocks air, which reduces the itch. But an analgesic product called Chigarid works much better. Like nail polish, it covers the site and has a hard coating. It also smells nasty but the smell goes away, just like nail polish does. Unlike nail polish, it contains camphor, phenol, menthol, and oil of eucalyptus. And it works on numerous other insect bites, such as mosquitos, fire ants, and stings, as well as cuts, burns, etc. It’s also effective for a rather long time, but you do need to reapply it three or four times a day. It is safe for children, and if you put it on and don’t scratch, it works!

Most medical sites will suggest an ointment with an antihistamine, specifically one containing hydrocortisone. There are numerous over-the-counter hydrocortisone creams but many people swear by Chiggerex, which contains benzocaine, an anesthetic.

I’m not a physician and I do not know your personal reactions to products, nor your responses to critters. If you have a reaction that you think is in need of a doctor’s care, by all means, see the doctor! And it’s always possible that a product deemed safe today will be declared hazardous tomorrow. So I offer a disclaimer: This is my best advice for now, so take it for what it’s worth. Hopefully it will render you less delectable to all those insects out there in our South Jersey summer.