Imagine this winding road once leading to a hub of international trade and commerce. 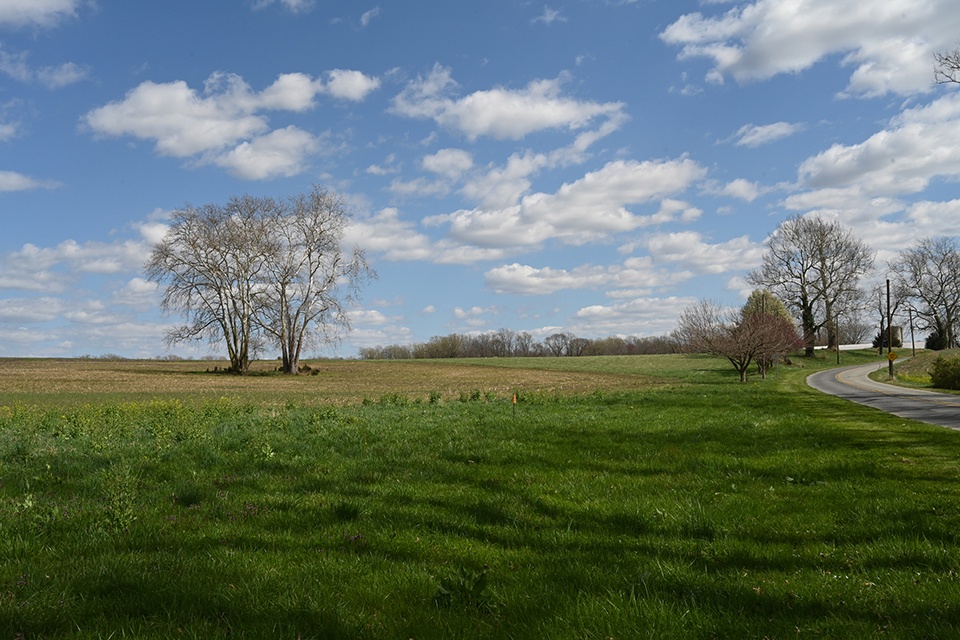 As you may recall from last week’s article, I’ve been travelling to the Bayshore Heritage Byway to do some exploring and to help prepare an All-American Road application. In these times of quarantine, we have tried to pick activities that my husband and I can do together while retaining social distance from others.

One real gem along the Byway is Historic Greenwich in western Cumberland County. In developing the application for the State Byway to become an All-American Road, I chose one feature there to highlight in our narrative—the Greenwich Tea Burning Monument. The idea was to describe an aspect that also would allow visitors to see the Greenwich Historic District and tell a story of our colonial roots. After all, CU Maurice River is not only about natural resources; much of our work involves the rich cultural heritage in our Down Jersey region, and we work hard to make our unique history accessible to our members and to the general public.

We approached Greenwich from the north on County Route 623. Just before Othello and across from Davis Millpond is one of my favorite views, with two huge sycamores standing majestically on a rolling hillside field. Yes, in southern New Jersey we have rolling hills in the western part of the county. We have filmed these trees, with their unmistakable patchwork bark, for some NJN documentaries we produced at CU Maurice River. The road changes from Chestnut to Ye Greate Street. Just past the Springtown Road “T” we stopped to take pictures of the Little Stone School with a weathered plaque reading, “Endowed as free school for poor children by Zachariah Barrow. Oldest Educational building in Cumberland Co. It served until the advent of public supported learning. Militia trained here in 1812.” This is a well-preserved one-room schoolhouse dating back to the 18th century. Publicly subsidized schooling began in the late 1890s when the school was taken out of service.

Leaving the school I reminisced about times when I had visited downtown Greenwich; even though it would present itself in only one brief mile, it never disappointed. Founded in 1685, Greenwich rapidly became important as part of the shipping route along the Delaware Bay. One of only a few official ports of entry in the New Jersey colony, it was an early hub of international trade and commerce. Later eclipsed by larger ports and bypassed by the railroads, Greenwich remains a quaint small town, the site of numerous historic houses and museums in a well-preserved landscape. This district is deservedly listed on the National Register of Historic Places.

The visitor comes into Greenwich on “Ye Greate Street;” it was laid out in 1684 and its course has never been changed. It is much the same today as it appeared 300 years ago, when the British flag flew high over it. The hand of time has hardly touched it. The street is unusually wide for a small colonial town. It abuts the Cohansey River, and remains the first landing reached from the river’s mouth.

Greenwich was the principal settlement in Cumberland County in 1774. It was founded in 1675 by John Fenwick and is older than Philadelphia, which was not established until 1682. Just after the intersection of CR 607/ Greenwich Rd., on the right was our goal, the Greenwich Tea Burning Monument. It was erected in 1909 by the Cumberland County Historical Society and commemorates the patriotic actions of Greenwich residents just prior to the American Revolution. On December 22, 1774, a group of about 40 young townsmen—Whigs, who were disguised as Indians—seized a cargo of East India tea bound for Philadelphia. It arrived on an English merchant brig, the Greyhound. Captain J. Allen unloaded it and hoped to keep his merchandise safely stored in the cellars of Daniel Bowen, an English sympathizer/loyalist. It is suspected that Allen knew his cargo was in jeopardy of seizure. The Whigs burned it in the town square, to protest England’s heavy taxes on tea shipped to the American colonies.

Greenwich has the distinction of being one of the few tea-party towns in America, the others being Charleston, SC; New York City, NY; Princeton, NJ; Philadelphia, PA; York, ME; Boston, MA; Annapolis and Chestertown MD. The monument stands as a symbol of triumphant American rebellion in our fight for independence from the British crown. The burning is said to have been well-attended by Loyalists and Separatists alike. In fact two brothers, Richard and Lewis Howell (later Governor Howell) and several others were indicted but by the time of their trial, the tides had changed in their favor and no conviction occurred. Looking at the monument, one can contemplate the bravery of these young men and their principled act.