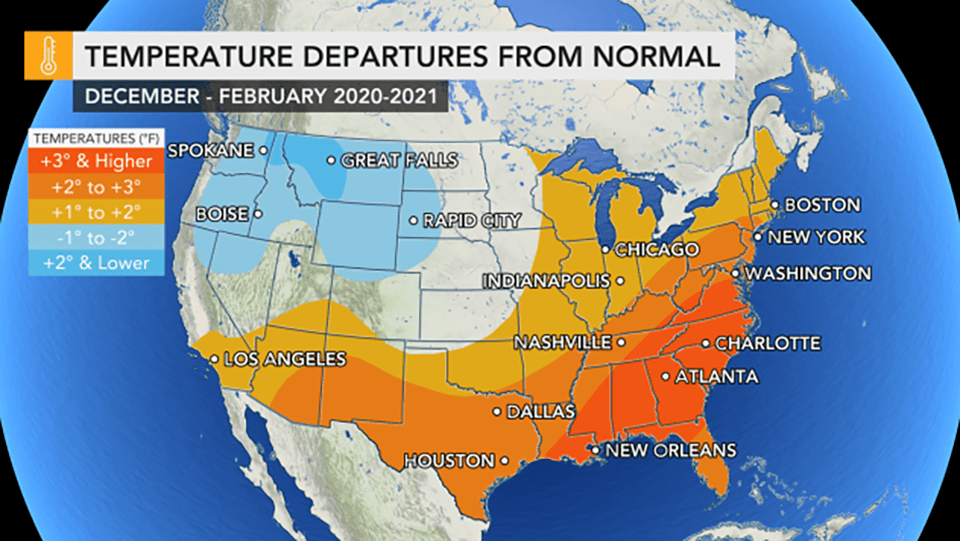 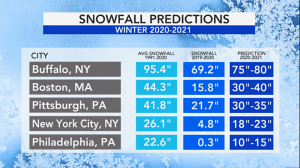 As Americans hunker down to weather the pandemic this winter at home, nearly every facet of life will remain upended to safeguard against the coronavirus. Millions are working from home and learning remotely and even holiday gatherings will look a lot different this year. Staying closer to home may mean fewer weather worries for commutes and disruptions to daily activities, but AccuWeather has you covered on what you can expect weather-wise as we navigate uncertain times.

AccuWeather’s team of long-range forecasters, led by Senior Meteorologist Paul Pastelok, has released its annual predictions for the upcoming winter season. The team has been analyzing global weather patterns and various weather models to project what conditions will unfold across the lower 48 United States this winter, which arrives on December 21 this year. Much of the time the setup will be driven by one key factor: La Niña.

La Niña is a phenomenon in which the surface waters near the equator of the Pacific Ocean is cooler than normal, the opposite of El Niño when the water in the equatorial Pacific is in a warm phase. This change in the water temperature can have a major influence on the weather patterns all around the globe. According to NOAA’s Climate Prediction Center, La Niña officially developed by early September and is forecast to continue through the winter months.

The ongoing La Niña is projected to bring weather conditions similar to what meteorologists expect across the country during a typical La Niña pattern, but there may be a few subtle differences, Pastelok said.

The winter of 2019-2020 was tame across much of the northeastern U.S. with only a handful of Arctic outbreaks and very little snow to speak of along the Interstate 95 corridor—and the upcoming winter could bring some echoes of last winter.

“Another overall mild winter is possible for much of the eastern U.S.,” Pastelok said, referring how temperatures will compare to the 30-year averages in many places. However, he expects “near-normal snowfall across much of New England.”

And, it’s worth noting, the entire season will not be mild all the way through. Instead, the season will be bookended by cold and snowy conditions with a pause in the wintry weather in the middle of the season.

“A big turn” is expected around the middle of the season as temperatures are predicted to rise and snowfall should decrease, Pastelok said, due in part to the strength and positioning of the polar vortex.

There will be a favorable storm track mid-season for the Midwest and Great Lakes, leading to above-normal precipitation and a few heavy snowfall events, Pastelok explained. The storm track will eventually shift eastward during the latter part of the season, bringing the potential for some big coastal snowstorms.

If the polar vortex holds strong, that could spell milder conditions for a significant stretch across parts of the Eastern Seaboard, at least for part of the season. “A strong polar vortex around the pole mid-season would lead to a possible January thaw that could linger into February for the East,” Pastelok said.

A period of stormy and snowy weather may occur later in February or March as nor’easters can develop and impact the region, Pastelok cautioned.