Love them or not, persimmons offer a unique taste experience. 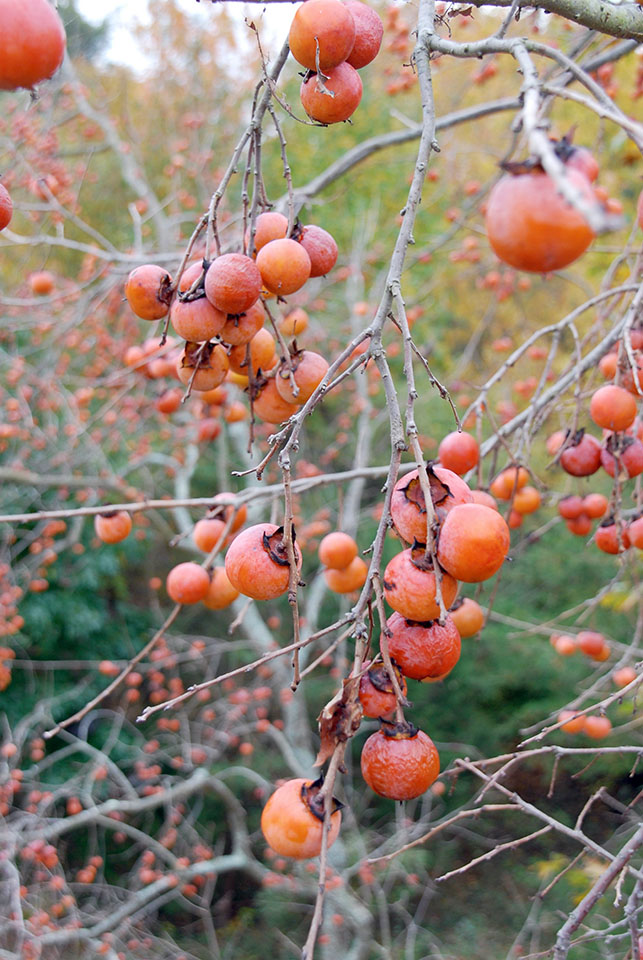 Many years ago, when the Campbell family had a salt hay farm in Dennis Township on Stimpson Island Rd., my husband and I use to visit them. Young George Campbell had what I would call a Bayshore accent, similar to the slight southern drawl heard from folks on the Maryland Bayshore. When George would give us instructions on how to navigate around the farm it would include references like the “stack yard” or take a right at the “lonely persimmon” and head to the big ditch. Only George always managed to stretch out the word persimmon, in a way that sounded nearly impossible to pronounce—“per-sim-a-nin-num.” Since then we can’t refer to the fruit without adding a number of extra syllables. Far be it from me to throw stones at glass houses, because I can add letters and syllables to all manner of what used to be English words. Yet we simply enjoy imitating the way he delivered instructions in the field.

In the fall, as soon as we would have the first frost, my mother-in-law would begin to ask my husband Peter, “How are the persimmons this year?” And that would be her clue that she hoped we would pick some for her.

The tree, like so many other things in the environment, is connected to a host of memories and feelings. 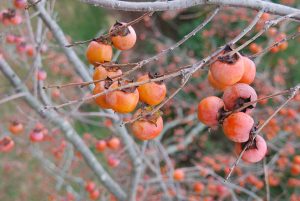 When we take nature walks I’m particularly fond of it because it can be identified at all times of the year by its distinctive, deeply checkered bark. Many trees in winter are more difficult to recognize once the leaves are gone, but not the persimmon. They often will grow in a line. A naturalist once told me it was because many mammals perch on fallen trees when they eat, particularly in the case of raccoons who clearly consume their fair share of the fruit. Thus, along the decaying fell of a dead tree, the seeds would get deposited or defecated, or you might say, “sown.” Normally when we see a species of trees growing in a row it has occurred by human intention. But I have often seen persimmon in a row where people clearly had no hand in their being planted. So maybe the old naturalist knew of what he spoke.

The persimmon’s range is circular, starting in Connecticut and westward to Nebraska, south to Texas, east to Florida, and then northward again to Connecticut. There are also populations in Utah and California. The tree is considered relatively uncommon in New Jersey, but our regional coastal habitats surely support it. It likes scattered light conditions, well-drained sandy soils as well as rich bottomlands, fencerows, old fields, and is found along waterways. We see it growing along streams and rivers here in Cumberland County.

The leaves are alternate along the stem vs. opposite, which would mean across from one another. They range in size from two to six inches. Each leaf is rounded at the base and makes a point at the end, somewhat eye-shaped. The leaves are leathery with a dark green upper and lighter-colored lower side. In the fall they turn shades of yellow or a deep magenta. The flowers are small and greenish white. The fruits are golf-ball sized and orange, connected tightly to the stem.

The tree has a deep taproot, making it hard to transplant but a good species for erosion control. Its wood is hard and smooth, invoking such common names as American or white ebony. The dense and shock-resistant nature of the wood makes it excellent for loom shuttles, cue sticks, and golf club heads. Its scientific name is Diospyros virginiana, Diospyros being the Greek word for “fruit of the gods.” The most familiar common name, persimmon, derives from the Native American word for the fruit. Their pronunciation sounded like putchimon or pushemin, which translated to “choke fruit,” likely having to do with the astringent sensation caused by the persimmon when it’s not quite fully ripe.

Persimmons are dioecious: There are both male and female trees and only the females bear. The fruit is sweet when ripe but prior to that it has a fuzzy texture in your mouth and is bitter, due to tannins. It makes you pucker and your mouth feels dry and cottony. The seeds are very large for the size of the fruit. The flesh adheres well to the seeds and eating even ripened fruit takes some practice. The skin tends to stick to your teeth. The inside flavor and texture is like a soft apricot with a hint of orange. Although some might say it is an acquired taste, I happen to enjoy them. On our nature walks they get mixed reviews; you either like them or you don’t!

The tree produces fruit as early as 10 years of age, but optimal age for fruit-bearing is considered to be 25 to 50 years.

My impetus for writing about the persimmon comes from a reader who noticed the tree behind the CU office in our neighbor’s yard and suggested I research it. This tree has large persimmons the size of your fist; the species is Diospyros kaki, a Japanese persimmon and the producer of the commercial fruit sold in stores. While the texture has some of the qualities that folks don’t like in the native persimmon—such as that stick-to-your-teeth effect—the seeds are generally very small and the fruit is widely considered to be delicious.

Medicinally its unripe fruit and inner bark have been used to treat fever, diarrhea, hemorrhoids, and hemorrhage. But by far the most common use for the ripened fruit has been for custards, puddings, pies, sherbet, cookies, and the like. Native Americans are also said to have made a tasty bread from it. Roasted and ground seeds were used by Civil War soldiers as a substitute for coffee; dried leaves have been used for tea. A southern newspaper during Civil War times also reported seeds as being used for buttons. The persimmon is a favorite of forest wildlife mammals like raccoons, opossums, black bear, foxes, skunks, and deer; in fact over 25 species, including otters, are known to eat it. Birds that enjoy it include quail, turkey, cedar waxwing, and catbird.

Whether the tree is in your yard or deep in the woods, there are a multitude of ways to enjoy its many gifts. n