The very name, Stretch Garrison, invokes lore. Just how much the tall tale got stretched remains a mystery. 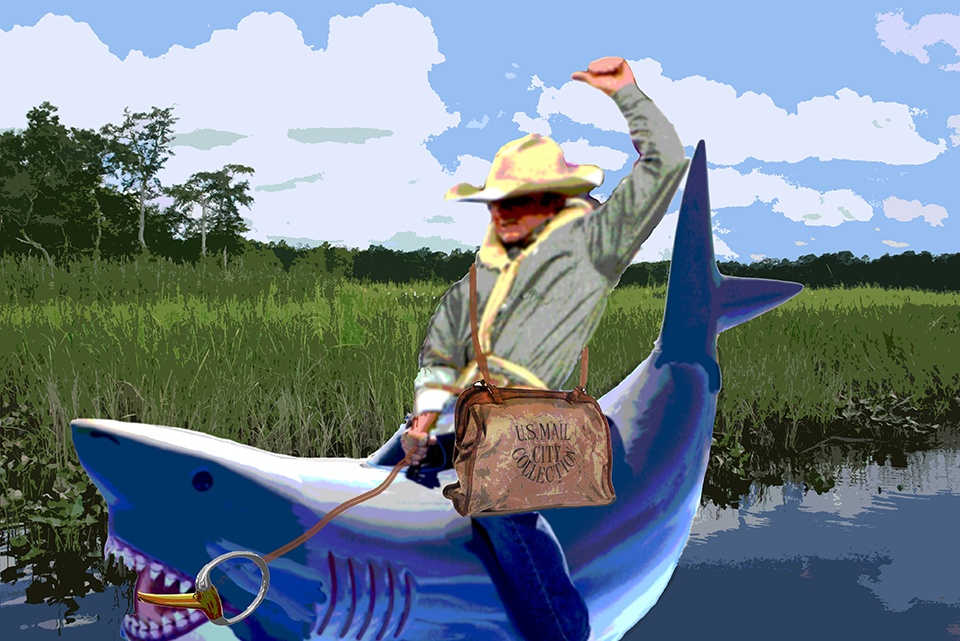 Each culture and region has legendary stories linked to people that are passed on as oral tradition from generation to generation. With proper enthusiasm, hyperbole, inventiveness, and seasoning they evolve into folk heroes, legendary creatures, famed and infamous personalities. Their legends become the mythology and regional traditions that are part of the mix that creates a culture. Sometimes the very identity of an area is defined by its lore. What is Loch Ness without Nessie; the Pinebarrens without the Jersey Devil; Abbeville, Alabama without Huggin’ Mary? What is the Northwest without Bigfoot or the logged forests of the western United States without Paul Bunyan? There are thousands of stories that enrich our imaginations throughout the United States.

These stories often begin much like the “telephone” game, where a chain of people whisper a comment to the next person in a queue and the last individual in the line reveals what they heard. Rarely is the integrity of the initial spoken word maintained. Add to this the flexibility to add some spice and it is a recipe for a mighty different fare—or is that “flair?” A powerful lumberjack ends up as tall as the trees and owning a huge baby blue ox. One of CU’s past articles explored how New Jersey’s best known legendary creature, the Jersey Devil, likely had its roots in a business rivalry between two gazette owners: Ben Franklin and Titan Leeds. Facts morph into fiction, iconic figures transform into legend.

I shall begin my narrative in truth and move to the stretches of one’s imagination.

TRUTH: In 2013 Meghan Wren, the founder of what is today known as the Bayshore Center in Bivalve, contacted Dr. Jonathan Sharp to discuss what marine life might present problems for her during her anticipated swim across the Delaware Bay. He said, “Jellyfish, and—well—there are sharks.” Although she was not thrilled by that prospect, her son Delbay was elated.

On August 3, 2013, Meghan swam the 13-mile journey escorted by two boats. From one craft her young son, Delbay, kept watch for sharks. Eight hours and 45 minutes after departing Port Manon, Delaware, Meghan emerged from the waters of the Delaware onto the shores of Fortescue, New Jersey. She had a huge smile as she was greeted by more than 100 supporters.

She declared she had swum for the people of the Delaware Bayshore, explaining “We have an amazing place here and I don’t think it gets enough attention, or enough investment in the future.”

She did end up with a few jellyfish stings, but much to Delbay’s chagrin he spotted no sharks after nearly nine hours of due diligence.

When I asked Delbay about his mother’s famed swim he simply shrugged and said sadly, “Well, we didn’t see any sharks.”

Five years ago two other kayakers and I were paddling just north of the mouth of Fortescue Creek in Beadon’s Cove when two fins arose from the water parallel to one another. One of my companions said, “Shark.” To which I replied, “Skate,” since the fins flared inward and were parallel as opposed to in-line. There were quite a few and then they were gone.

A few minutes later I said, “Shark.” And indeed there were a number of not-so-shabby sharks, rounding our kayaks like racing buoys. Sharks will predate on skates so possibly they were lured in by their presence. Going forward this is one of the few truths in the story I shall relay: Delaware Bay does have sharks.

Many years ago Phil Correll from the National Park Service called me regarding the Coastal Heritage Trail and the Bayshore Heritage Byway. As an aside he asked if I was familiar with Stretch Garrison; he was seeking more information about him. But alas, I had never heard of this character of local legend. Apparently in the 1930s, and for some years before, he was well-known.

In at least two books Stretch Garrison’s story appears—Upstate Downstate: Folk Stories of the Middle Atlantic States by M. Jagendorf (c. 1949) and New Jersey, A Guide to Its Present and Past, Compiled and Written by the Federal Writers’ Project of the Works Progress Administration for the State of NJ (1939).

In 1935 the United States Work Progress Administration (WPA) sought to employ people to get a depression-ridden economy back on its feet. Historians, teachers, writers, librarians, and other white-collar workers were hired and tasked with the Federal Writer’s Project. Most of us have heard of the WPA blue-collar workers’ many infrastructure contributions to our state and federal parks, but there were many jobs for researchers as well.

Local historian Linda Hruza-Jones assisted me by identifying other references to Stretch Garrison in a AAA travelers’ guide and through fleeting mentions in newspaper articles. Thus far we have not found primary materials that link him to a real individual named Garrison. However, in the Historical Atlas of Cumberland County, NJ 1876, D.J. Stewart, the Garrison name exists on maps of the area along the Maurice River. In Commercial Township the name appears on many properties south of Mauricetown and into Port Norris. Today there remain many Garrison descendants in our region.

The WPA Guide is one of my favorite reference books about New Jersey. In the section devoted to Folklore and Folkways it discusses some famous Jersey characters. It begins with the preeminent Jersey Devil but reveals that the Maurice River has its own tall tale of Stretch Garrison.

Most American tales start with a “real” individual who becomes larger than life in the retelling. One would suspect that there once existed a Mr. Garrison who was an enterprising farmer and an excellent fisherman but who was also known for his tendency to “stretch the truth.”

So we have set the stage now for the LORE. Apparently Stretch Garrison had a farm on the Maurice River not far from the Delaware Bay. He was also a hunter, fisherman, and woodsman. One day he caught a shark and fastened his anchor line to the beast, which proceeded to take him on a Jersey-style Nantucket sleighride through the oyster beds, destroying a 100-foot swath up the river. Evidently it was low tide and the ambitious critter sped through the mud, digging a new channel with its tail for five miles, right up to Garrison’s landing.

When the shark was exhausted Stretch outfitted him like a horse, with a saddle and bit. He trained the shark, directing him by the reins to “gee and haw,” enabling him to deliver the U.S. Mail up and down the Maurice. The famed delivery was considered the “eighth wonder of the world,” and spectators, including senators and congressman, came to view the strange twosome until he retired the old shark to sea to be with his finned cohorts.

Stretch had other inventive schemes. For his cows he developed a treadmill attached to a churn, such that the cows would walk in place at night, turning their own milk into butter by morning. He also decided that he should employ the labors of a rooster. “A finer rooster there wasn’t in all the country wide. His comb was red as the rising sun, and when he crowed, pigeons fell off their perches (Jagendorf).” Placing feed incrementally higher on objects—a box, a barrel and finally the porch—his rooster “Big Boy” jumped and stretched until he became enormous, so massive he could be hitched to a farm plow. “That rooster was famous from NJ to California, and Stretch was mighty proud of him (Jagendorf).”

However, Big Boy’s appetite became a challenge so he decided to add cement to augment his feed. One day this meal plan turned him to stone, so Stretch gifted him to the City Fathers and they placed him on top of a power plant and outfitted him with a siren. Jealous of his size or sound, the other roosters crowed at him night and day and he was finally retired.

I tell this tale to help give it renewed life, for the imagination that goes into folklore is not only farfetched fun but can link us as a community.

Folklore is often born of real feats by legendary heroes. Possibly someday Meghan will have crossed the Bay in an hour with the assistance of a shark that her son Delbay trained prior to the journey. And her newly opened store in Fortescue will be famous for selling oysters shucked by a pet stingray. But whatever invented stories may evolve, her guidance in the transformation of the AJ Meerwald back to its former glory as an oyster schooner, and ultimately NJ’s Official Tall Ship, will be an exploit never again matched or duplicated by mere mortals.

Hats off to the many people who keep our heritage a living history.