The large and varied habitats of Cumberland County host more than a dozen species of these breeding songsters each spring and summer. 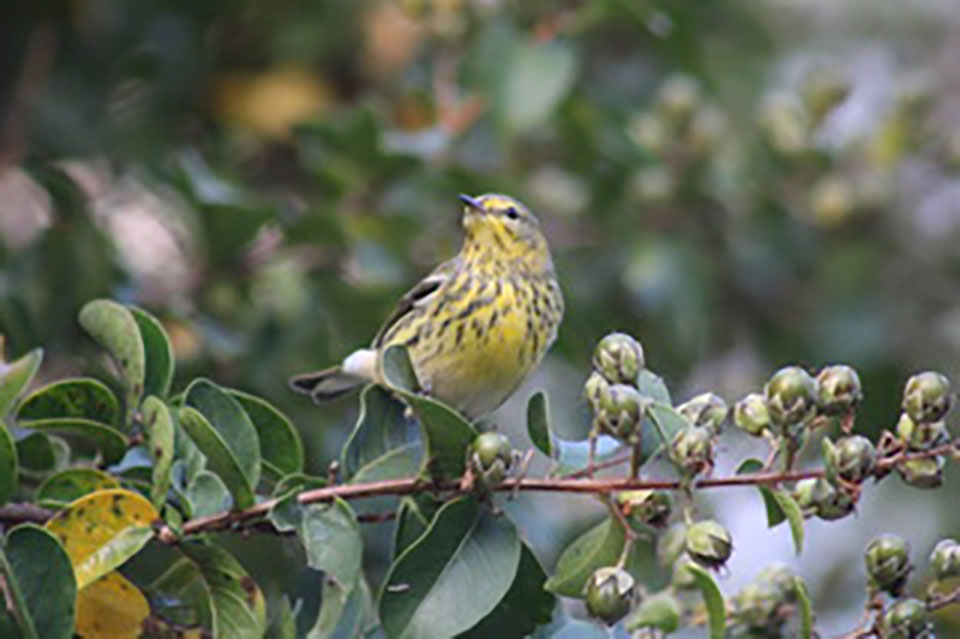 They have names that evoke their appearance, like the chestnut-sided, black-throated green, or yellow-throated. Or names that describe where they may have been first identified like Tennessee, Cape May, or Nashville. Or names like Wilson’s, Blackburnian, or Audubon, which honor historic and famous naturalists. They are the wood warblers, one of North America’s largest and most diverse families of birds.

The wood warblers number over 57 species throughout North America, though in the east we might encounter upwards of three dozen. Because of their colors and bold patterns they have often been described as the “butterflies of the bird world,” but sadly they have become the proverbial “canaries in the coal mine,” tiny victims of the twin and interrelated scourges of climate change and habitat loss throughout the hemisphere.

Wood warblers, similar to thrushes, flycatchers, tanagers, cuckoos, and other long-distance travelers, may be described as neotropical migratory birds, splitting their year between the fields and forests of North America and the lush jungles of the tropics of Central America and the islands of the Caribbean. Beginning in March, a stream of migrants from Central and South America swarm into the United States and Canada.

Over many millennia, they have developed an adaptation enabling them to take advantage of the relative lack of territorial competition in North America as well as the abundance of insect life found throughout the continent in the warmer seasons. As March turns into April the flood of migrants increases until it peaks in early to mid-May.

Birdwatchers delight in the strikingly colored and patterned songbirds. Most are glimpsed fleetingly high in the treetops, resulting in the notorious birders’ “warbler neck,” while others seem to skulk invisibly on the forest floor or in the understory.

The wood warblers can most often be identified by their distinctive songs, heard during migration especially in the early morning after sunrise. Cumberland County, with its large and varied habitats, hosts more than a dozen species of breeding wood warblers each spring and summer. Walking through the woods throughout April, May, and June, birdwatchers may encounter species like the ovenbird with its loud and boisterous “teacher, teacher, teacher!” call, or a pine warbler’s musical trill high in the pines.

Wet woods throughout the county host the vibrantly yellow prothonotary warbler and the enigmatic Louisiana waterthrush, whereas in the coastal marshes, common yellowthroats and yellow warblers abound. During the peak of migration in early to mid-May one might also encounter species that are stopping off to feed and rest on their way to more northern locales. Black-throated green warblers, Canada, magnolia warblers, or Wilson’s warbler, among others like the Cape May, the bay-breasted and blackpoll, nest in the northern Appalachian forests all the way up to the Canadian taiga.

Like most songbirds in our area, the warblers and other neotropical migratory birds depend upon insect protein in the form of caterpillars and flying insects. Many of these birds’ migrations are timed to coincide with insect outbreaks throughout their ranges. A typical brood of songbirds requires thousands of insects brought to the nest by the parents through frequent forays into the forest canopy searching for caterpillars and larvae. Some of our warblers are able to raise more than one brood in a season, depending on the weather conditions and availability of insects. Obviously a severe decline in the population of insects can have a devastating impact on numbers of our wood warblers. It is critical for those of us who love and enjoy these amazing creatures to provide host plants for butterflies and moths to supply a number of larvae to sustain them and their offspring.

As the season changes and the amount of light begins to dwindle in North America, the warblers begin their journey south to the jungles, parks, and fields of Central America and the islands of the Caribbean. Strong cold fronts from Canada sweep the migrants along and provide a tailwind for these diminutive fliers. One of the more incredible migrations is that of the blackpoll warbler, which flies out over the ocean to Brazil nonstop for over six days.

Most of the other warblers will follow natural landmarks such as the coastlines, rivers, and mountain ranges to find their way back south. In the east, many of the songbirds will leap the Gulf of Mexico in a night and fall out on the Yucatan Peninsula of Mexico before continuing on their journeys. Once back in their winter homes, the warblers join with the resident birds in mixed flocks, moving through the forests of Costa Rica or Guatemala as far down as northern South America.

Habitat loss in the tropics as well as in the North are resulting in significant declines in the numbers of our wood warblers as well as other neotropical migratory passerines. Forest fragmentation permits increased pressure from predators as well as from nest parasites like the brown-headed cowbird. Climate change is impacting the synchronicity that these birds rely upon to arrive at precisely the time when their food sources are at their most favorable. If trees begin to leaf out and flower earlier, some of the birds will miss out on the abundance of insects that accompany the initial bud break and blossoming. Climate change is also resulting in more and stronger storms that impact birds’ ability to conduct their migration in the way that they are adapted. Anyone who has been birding for several decades will tell you that the numbers of warblers and other birds are declining.

What can be done to protect these amazing intercontinental travelers? Certainly conservation of habitat in both the northern and southern grounds is critical to their survival, as well as addressing the climate change crisis. It is also helpful to create rest stops by developing bird-friendly areas along the way, so they can find the fuel necessary to continue their migration.

Welcoming warblers to your landscape is not difficult if you have native trees and other plants where the birds can glean insects. Providing a source of water such as a mister or a recirculating birdbath will draw them into your yard. Be sure to provide cover for the birds to avoid attracting cats. And keep cats indoors! The future of these warblers is uncertain, but awareness of their plight and an appreciation for their tenacity can only help to bring folks to their aid, so that future generations will still be able to enjoy their beauty.