A frog ... by any other sound ... is not the same species—but his intended will know. 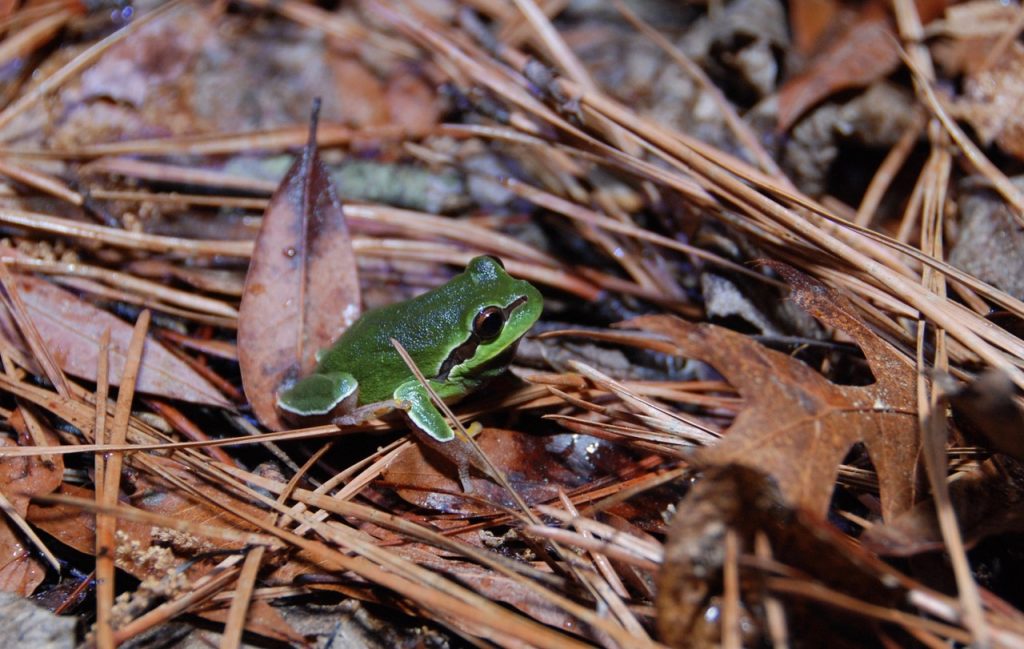 Pine Barrens treefrog, symbol of the Pinelands, is listed in New Jersey as endangered because of its restricted range, declining populations, habitat reduction and pollution.
by J. Morton Galetto, CU Maurice River

Spring is heralded by the singing of birds and frogs, and it’s all about dates. The “morning song” belongs to birds and treefrogs, but the evening is primarily for the amphibians’ cotillion. Males serenade females with their best song. Each frog and toad species has its own unique call, and each individual its own unique voice. Like birds we can learn each species’ song in order to identify them. In fact, the NJ Conserve Wildlife frog censuses are conducted solely by sound. However, identifying individuals is best left to the prospective mates.

In New Jersey, we have at least 16 species of frogs and toads. They are the green, upland chorus, New Jersey chorus, northern cricket, spring peeper, pickerel, bull, southern leopard, carpenter frog, and wood frogs. And the treefrogs include northern and southern gray, pine barrens, along with spring peeper. Then we have three toads—spadefoot, Fowlers, and American.

In 2011 the American green tree frog was discovered to have extended its range into New Jersey’s Salem County and has since made appearances in Cumberland as well. Furthermore, in recent years another leopard frog was determined to be existing in New Jersey. Biologists had long noticed some dissimilarities in leopard frogs, but it wasn’t until 2012 that DNA and sonogram research revealed that our leopard frogs were two distinct species, the second now referred to as the Atlantic coast leopard frog (Rana lithobates kauffeldi), so named as a salute to acclaimed herpetologist Carl Kauffeld who was the first to note the dissimilarities in the 1930s. Sadly, he passed in 1974, never having had his suspicions confirmed.

Frogs belong to a group of animals known as amphibians, meaning “two lives.” Like many life forms they start as eggs, and then they progress to tadpoles, and when fully developed are able to live on both land and water. Toads differ from frogs in that they have a dryer skin with warts, crests behind their eyes, and glands that secrete toxins to help discourage predators. My hunting dogs seem a bit thick in this regard, picking them up and then reacting to the poison. I don’t think it is intoxicating, I fear my dogs are just lame.

Vernal pools are the preferred habitat for many frogs, especially the treefrogs. A vernal pool is determined to exist if it holds water for at least two months of the year. What is most important to amphibians is that the pool goes dry annually so it doesn’t support fish, which would prey upon them. The pools are an important habitat for reptiles, plants, insects, and other wildlife as well. This habitat type is critical enough that the NJ Division of Fish and Wildlife has a database to catalog sites of vernal pools. The State’s Land Use Regulation program seeks to protect these wetland features when land use permits are sought. I’m not sure how many are currently cataloged but it is estimated that 3,000 to 5,000 are in New Jersey. In southern New Jersey some are the result of topography created by former sand mining borrow pits.

The Division also identifies seven amphibians—one frog, one toad, and five salamanders as obligate breeders, meaning they must use vernal pools. Fourteen others use vernal pools but can also accommodate to ponds; these are called facultative breeders. Two species of turtles—wood and spotted—use the pools on a seasonal basis.

On warm days starting in the middle of March some of our early frogs begin their chorus, but come May and June they can create a true cacophony of sound. When their songs come from many species at once the din can make distinguishing one call from another more difficult.

Although we often can’t see the frogs when we scan for them, if we stand still and listen we can usually identify them by sound. Over the years biologists have described the calls in various ways but most have agreed to certain descriptions.

Let’s discuss some of the frog and toad calls most commonly heard in southern New Jersey.

• The bull frog is one of the easiest to identify, with its deep bray like a bull.

• The carpenter frog’s name is also derived from its call, which evokes the rhythmic double tapping of a hammer.

• The eastern spadefoot is secretive and not commonly heard, spending lots of time underground; its call is a short, low, nasal honk.

• The Fowler’s toad is a harsh nasal w-a-a, like the cry of a baby wearing a nose clip.

• The green frog is very common and talkative with its twang like a banjo string being plucked.

• The chorus frog is a favorite, with its call like a thumb stroking the teeth of a plastic comb.

• The northern cricket frog, you guessed it, has a rhythmic cricket-like call.

•You have probably been hearing a birdlike sound especially before dusk and into the evening; this flutelike warble is the northern gray treefrog. The endangered southern gray is higher and faster.

• Most of you are also probably familiar with spring peepers’ high-pitched trill; some have described it to be a bit like sleigh bells when many join in.

• And what’s that ascending and descending snore in the swamp? The pickerel frog looking for a date.

• The duck chatter is a southern leopard frog, while the Atlantic coast leopard frog spaces its clucks out more.

By keeping your ears open, with a little practice you will know what’s out there even if you don’t catch a glimpse of the suitor.

Source: NJ Division of Fish and Wildlife materials and website