Basking turtles such as the redbelly will line up on logs and shorelines to sun themselves— but where do they go in winter? 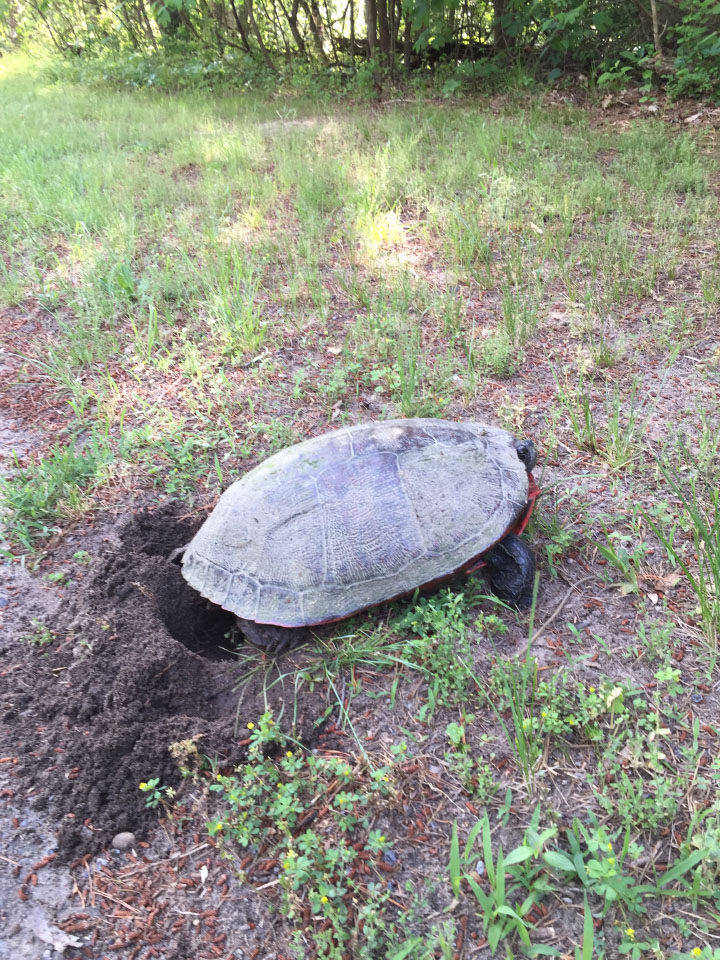 On your warm-weather travels around southern New Jersey’s rivers and marshes you will likely see turtles lined up on logs sunning themselves. We have two main aquatic basking turtles in southern Jersey that are often obvious—the painted turtle, generally four to nine inches, and the red-bellied turtle, at 10 to 16 inches, which is New Jersey’s largest basking turtle. Some turtles warm up just beneath the surface, like the snapping turtle and diamondback terrapin. But true basking turtles come completely out of the water and line up on logs and shorelines to sun themselves. As cold-blooded creatures they rely on the air around them to regulate their body temperatures.

There are other turtles that bask in New Jersey but these are smaller and not as prone to congregating. So you are unlikely to see them unless you are in the field a lot and truly looking for them. These include the bog turtle, which is rare, reclusive, and more often found in the mud. The common map turtle is native to central and further north along the Delaware River, and is extremely wary. The introduced red-eared slider and spotted turtles will also bask, but I have never seen them in groups.

The focus here will be on the redbelly primarily because of their high visibility. You have probably noticed them in places like Giampietro Park, Malaga Lake, WheatonArts, Shaw’s Mill Pond, and along our rivers. My favorite place to see them is just south of Union Lake Dam on the Maurice. On our CU Maurice River walks, we have counted as many as 75 at a time in groups along the shore and on fallen trees. If you’ve seen them in such large congregations you might wonder, “Where do they go in winter?” First a few general facts.

The redbelly is also called red-bellied, northern or eastern red-bellied, and red-bellied cooter, although its proper name is Pseudemys rubriventris. The name derives from a combination of Greek and Latin. Pseudes means “false” and emys means “turtle.” Rubriventris comes from Latin’s ruber or “red” and venter means “belly.” Its plastron, or bottom shell, is a reddish-orange and often visible on the sides. The carapace, or top shell, appears black to deep brown; when wet, some red banding might be seen, but this is less prevalent as the turtle ages. Juvenile turtles are greenish on top and more orange on the bottom.

Females dig a vessel of sorts in soil where they lay their 10 to 20 eggs, and then they cover them with a liquid that helps to keep the clutch somewhat glued together. This makes it structurally stronger. They tend to use the same nesting areas year after year, primarily from May through July. Most eggs will be eaten by predators—raccoons, skunks, crows, foxes, and others. When curls of white shells are seen on the surface the nest has been depredated. Successfully hatched young must dig their way to the surface, thus leaving their eggshells underground. I have watched crows observe turtles as they lay their eggs and then predate the nest after the mother is done. If the eggs survive 10 to 16 weeks of incubation, the young will hatch and once again will be prone to predation by herons and bullfrogs. If a turtle is fortunate enough to mature it can live 40 to 55 years.

Interestingly, the young are primarily herbivores and the adults are omnivores, eating crayfish, snails, fish, tadpoles, and such. Furthermore, it is not until turtles are five to nine years old that they are sexually mature.

We stop seeing them in late fall, when 50° temperatures generally trigger retreat. In answer to our original question, “How do these cold-blooded creatures survive the winter and where do they go?”, they partially bury themselves in the mud on the bottom of ponds, streams, and rivers. They assume what is called a brumation state: a hibernation of sorts for cold-blooded animals. Brumators will sometimes briefly resume activity during a warm day. Hibernators don’t awake during a brief warm spell; they also maintain normal oxygen demands. As brumators’ body temperature drops so too does their metabolic rate; in fact their heart rate slows to as little as one beat every couple of minutes, lowering their need for oxygen.

They also have an extraordinary adaptation called cloacal respiration. Let me put this delicately: Like birds, reptiles have only one orifice for both reproduction and waste, which is very efficient. The opening, or cloaca, is surrounded by many blood vessels, and these vessels can access dissolved oxygen from the water when it passes over the body’s surface. Since their metabolic rate is lowered they can survive on very little oxygen.

For many years scientists believed brumating turtles to be in a coma-like condition. It is only recently that scientists have discovered that turtles retain a state of consciousness. In laboratory settings scientists created conditions with light and temperatures to imitate winter. They outfitted turtles with electrodes and measured their response to various stimuli. The results showed that they maintained an awareness of their surroundings, and were especially vigilant to signs of spring light and warmth.

If you are missing these denizens of our local waters, come April they will start to reappear and begin to bask again in their stately glory with necks outstretched to the sun. But don’t venture too close or they will quickly retreat to beneath the water’s surface. They may even bury themselves in the mud! n