Customer loyalty is the secret to 40-plus years in business for Rental Country, says Founder and President Gary Galloway. 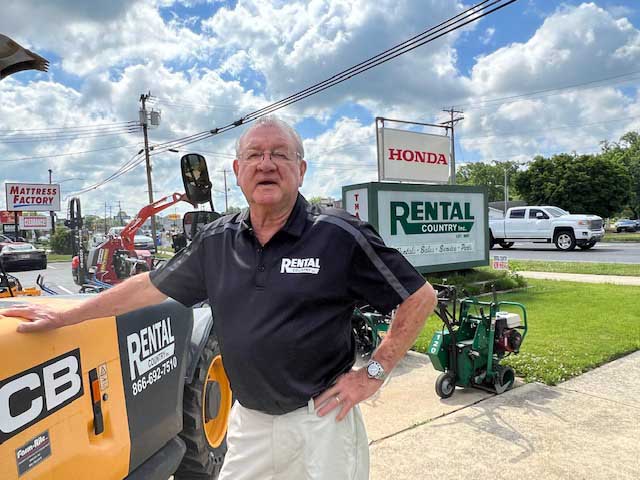 Treating the customer as he would like to be treated is the one thing that has remained the same since Gary Galloway first opened the doors of Rental Country in Vineland back in October 1981.

“We have some customers that have been with us since 1981. You can’t buy customer loyalty. You just have to treat them well and that’s what we always try to do.”

Taking the leap from funeral director to equipment rental was a jump that Galloway made with the support of his wife Betty after a friend decided to close up his own shop.

“It took probably about three or four years before I knew what I was doing. I was a funeral director, I didn’t know anything about equipment rental.” Galloway laughs as he tells the story of the start of Rental Country, “I bought a pile of junk that I didn’t know was a pile of junk.”

Forty years, four locations, and thousands of pieces of equipment later, Galloway says that one thing hasn’t changed—his philosophy of treating people the way they want to be treated. Do whatever you can to make people happy.

“My favorite thing is waiting on customers. I like to wait on people and make them happy. I try to give them a little advice on what piece of equipment they need.”

Galloway goes on to say that “if any of my managers get a call from a customer that they can’t make happy, I say I want that call… Just because I’ll start off the conversation with ‘what did we do wrong?’…and probably 99 times out of a hundred those people will give me a 5-star rating by the time I’m done.” One of the biggest changes to Rental Country’s business in the past 40 years is the amount of sales they do. Galloway says, “It’s not just rentals anymore. We took on Sthil and Honda franchises and they’re probably half our business now.”

In addition to sales and rentals, Rental Country has a full repair facility at each store location. They can repair just about any type of equipment, whether it’s purchased at Rental Country or not.

Being a people person, Galloway has enjoyed supporting the South Jersey community in many ways since opening Rental Country, including being the current chair of the Inspira Foundation Board, Board member of the Hendrick’s House Group, and past president of the Cumberland Cape Atlantic YMCA Board.

Galloway says that even with supply chain issues and trouble with staffing during the pandemic, he remains grateful for the support of the community. “We couldn’t have lasted 41 years without our loyal customers. They’re all appreciated.”