The off-season at the Jersey Shore offers locals and South Jersey mainlanders some real gems. 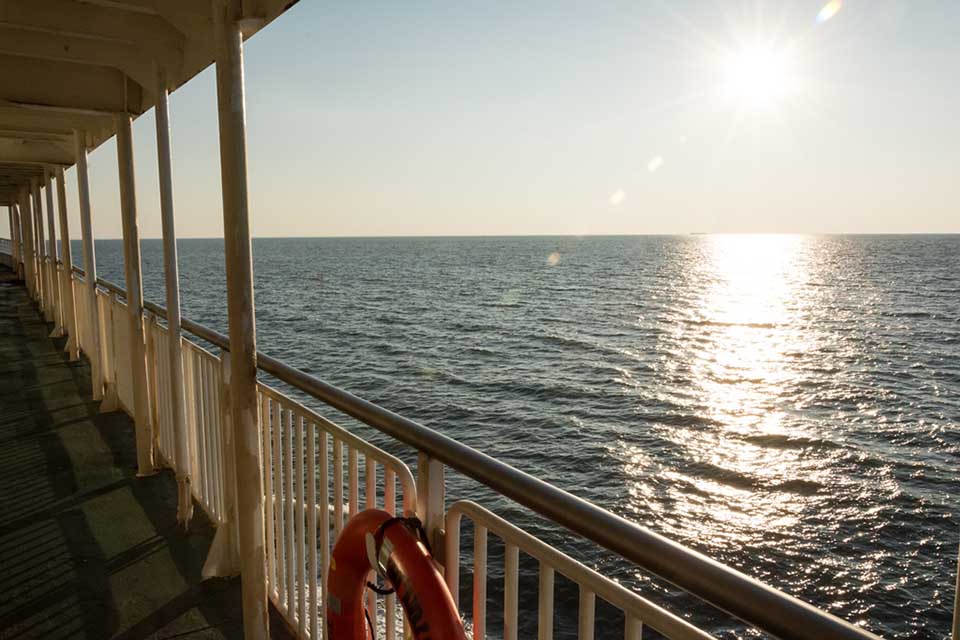 View from Cape May ferry
by William Sokolic

A promised in last week’s cover story, “September at the Shore,” this week we explore other activities outside of Atlantic City, from Brigantine to Ocean City to Cape May. Keep in mind that is just a sampling of what’s available this fall to Jersey Shore mainlanders.

Cape May County shore towns have long carved out a shoulder season in the fall and spring. But none more than its bookends: Ocean City and Cape May City. In terms of events, places to go, these two have it down. Dating back to 1970 and the formation of the Mid-Atlantic Center for the Arts (MAC), Cape May has carved a niche for itself as a year-round mecca for quaint getaways.

Created by a group of volunteers, MAC has evolved into a smorgasbord of options for the visitor, young or old. The initial goal focused on preserving the town’s character, history and architecture, said Susan Krysiak, director of media relations: “They banded together to save the 1879 Emlen Physick Estate from demolition. Ever since, Cape May MAC’s mission has been consistently dedicated to cultural and heritage tourism and making Cape May a year-round destination. That means every day of the year we work to plan and offer tours, activities and events that educate and inspire those who visit and live here.”

Here are six tours and events:

2. Taste of Cape May Kitchen Tour: October 15. 1 to 4 p.m.—Watch family chefs prepare homemade dishes inside five Cape May homes. These elaborately designed kitchens will amaze and inspire you. This tour also includes a delicious tasting at each location from some of the area’s great commercial kitchens. $30 admission

3. Magic & Mystery House Tour—Victorians were fascinated with mystery and illusion and this tour through select rooms in the 1879 Physick House Museum shares that fascination. Learn about Harry Houdini, Ionia the Goddess of Mystery, The Great Lafayette and more. $20 adults and $15 children 3 to 12.

4. Historic District Trolley Tour—Tour guides explain Cape May’s history and architecture and how and why it has survived and thrives to this day during the 45-minute tour. This narrated tour travels through portions of Cape May’s historic district. Guides discuss the architecture and history of the area. Begins and ends at the Ocean Street trolley stop. $20 for adults, $15 for children 3 to 12.

5. Ghosts of Cape May Trolley Tour—On board a trolley with an experienced guide for 30 minutes, you will begin to wonder what’s beyond when you hear the tales of hauntings unearthed in Cape May by famous psychic medium and author Craig McManus. Begins and ends at the Ocean Street trolley stop. $20 for adults, $15 for children 3 to 12. 6. 14th annual Scarecrow Alley at the Physick Estate: October 1-31—The grounds of the estate becomes transformed for the spooky season. Walk the grounds and vote for your favorite ghoulishly gruesome or foolishly funny scarecrow at capemaymac.org/scarecrow-alley/

• Spirits, Magic & Mystery Combo Tour: Victorians of the late 19th century had wild notions about the passage from life to death and were fascinated by mystery and illusion. Hear Cape May ghost stories as you travel Cape May by trolley, along with strange stories from Victorian Cape May that are just plain weird. Begins and ends at the Washington Street Mall Trolley Stop. $30 for adults and $20 for children 3-12.

• Phantoms of the Physick Estate: The Spellbound Sisters—Ever since three strange sisters moved into the 1879 Emlen Physick Estate, Cape May has not been the same. Rumors say that these women might be using dark magic. Join in this interactive mystery play as you move through Cape May’s Physick House Museum, 1048 Washington St., with three mysterious guides. $25 for adults and $20 for children 3-12.

For an experience away from the city, take a ride on the Cape May-Lewes Ferry. Take your car across or just you and the family. Fares are $37 one way; $67 round trip and $40 each way on the weekends. Walk-on passengers pay $10 one way and $18 round trip. Excursions take place every 90 minutes. Visit cmlf.com The northern bookend, Ocean City, has its own fall charm. What other place has a reunion of Porsches?

“A full calendar of family-friendly events from our Boardwalk Aerobatic Airshow to our Fall Block Party to a wide variety of runs, car shows and concerts, make Ocean City a great destination during the ‘second summer,’ ” said Doug Bergen, public information officer for the resort.

Ocean City also has the boardwalk, with more and more stores staying open longer. And like Cape May, it’s the events that bring out the crowds, mainly locals.

A sampling of family events:
• Ocean City Airport Festival, September 17 at 26th and Bay Avenues, 10 a.m. to 3 p.m.
• Parachute Pyrotechnic Show, September 17
• Boardwalk Aerobatic Airshow, September 18, from 6th to 14th streets over the ocean, from 1 p.m.
• The people version of a Halloween Parade is October 27, 7:15 p.m. on Asbury Ave. from 6th to 11th Street. The next day features
• A Halloween Costume Skate at The Ocean City Skate Park at 4 p.m. Whatever adventures we choose, from Brigantine to Atlantic City to Ocean City to Cape May—and the towns in between—let’s enjoy the season at the Jersey Shore.

The non-Atlantic City portion of the fall handbook at the Jersey Shore includes farmers markets. Here’s a sampling of where you can pick up veggies, produce, and more. • Galloway Green Market in the Historic Towne of Smithville, 615 E. Moss Mill Road. Held on Thursdays from 4 to 7 p.m. The last one for the season will be on September 8.

• Brigantine Farmer’s Market will have special markets on October 15 to celebrate the 50th anniversary of the bridge from Atlantic City to Brigantine, and again on November 19 right before Thanksgiving, according to Fran Paullin, market manager. “At the fall markets, in addition to their regular wares, vendors will bring some items especially geared to the upcoming holidays,” she said. Both markets run from 9 a.m. to 1 p.m. at the Brigantine Community School parking lot at Sheridan near Roosevelt Boulevard.

• Ron’s Garden at the Farley Service Plaza on the Atlantic City Expressway. The market continues on weekends through October. Seasonal fruits, vegetables, plantings, flowers are offered at that time,” says Kimberly Testa, a spokeswoman for the South Jersey Transportation Authority.

• Pictured: Ocean City Farmers and Crafters Market, 6th and Asbury avenues on Wednesdays from 8 a.m. to 1 p.m. through September 14.

Just north of Atlantic City, a real gem for September beachgoers is Brigantine.From October through March, you can ride horses on the North Beach section of Brigantine, with a permit. Horseback riding not to your taste? Go fly a kite.

Explore the North Brigantine State Natural Area, one of the last undeveloped beaches in New Jersey. With thousands of birds and plants photo ops are boundless. There’s a two-story observation deck for even better snapshots.

Go fishing: In the fall off-season, you won’t have to deal with as many people crowding the Cove to reel in the striped bass that’s plentiful this time of year.

The Cove is home to bait-sized fish like mullets, peanut bunker, and bluefish, which can easily be collected in a bait net.