With a plan in place, they can be low-maintenance—and picturesque. 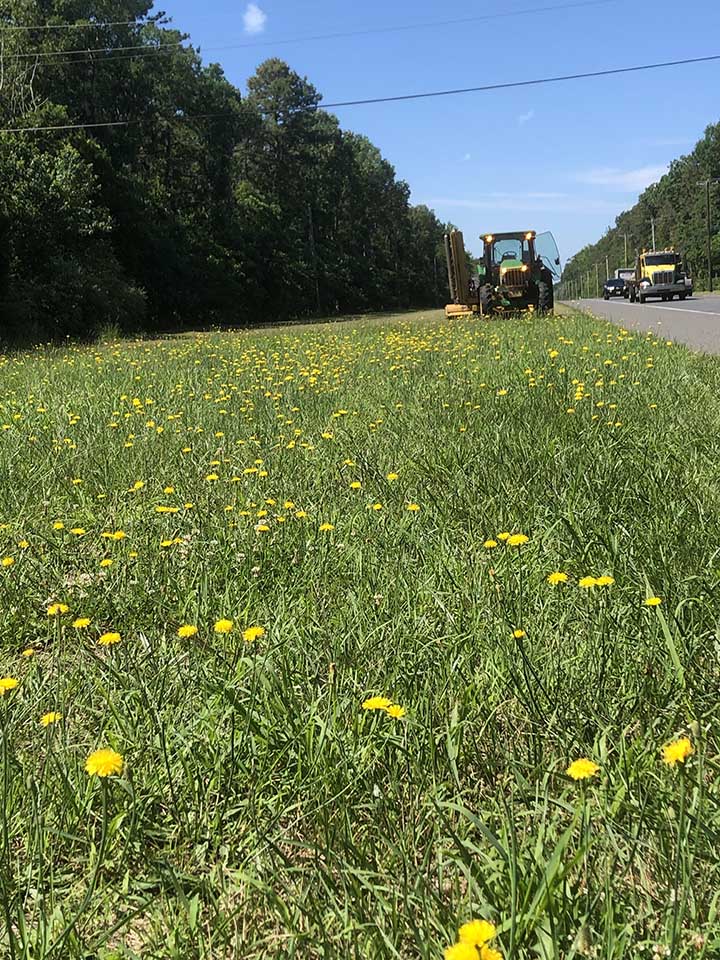 In the middle of June I had a morning appointment in Hammonton. Driving north on Route 54 I found myself enjoying the false dandelions along the famously wide northbound shoulder. I thought how considerate it was of the road crews to leave this unmown sea of yellow flowers that beautified either side of the road. The day was bright and sunny so their petals were open and their stems outstretched to the east. It seemed idyllic.

My return trip was going splendidly until I came across a huge state mower busy keeping things tidy; my heart sank. I began to think of all my little battles to leave patches of this and that plant unmown so that a little interest and color could be appreciated by travelers. Many states have instituted “no-mow” zones in the large median strips of highways where they plant wildflower mixes for motorists to enjoy. The Atlantic City Expressway actually saves money by planting flowers and thereby minimizing maintenance in sections along the route.

It is amazing how many mixed reactions these areas evoke, especially during no-blossom times—from “wonderous” to “dreadful hideous weeds.” As you might guess I’m in the “Isn’t this lovely!” group of onlookers.

I stopped and photographed the mower; I’m sure the operator was impressed. He likely thought I was suicidal. What I do for you, the readers! This article will explore the plant for which I was considering lying down in front of a tractor to prevent it getting a haircut—NOT! I might be odd but I’m not daft nor do I harbor a death wish.

Let’s explore the Pineland Commission’s efforts to protect rare flora along roadsides and what the future might hold for this wide right-of-way.

First the plant: Most readers have probably seen Hypochaeris radicata—false dandelion, common cat’s-ear, flatweed, or gosmore, also known by a host of other folk names—in their yards and along roadsides. It has basal leaves and sends up a stalk with a single yellow blossom that resembles a dandelion. It’s considered a non-native invasive, so I’m happy I didn’t lay down my life for that one.

Invasive species out-compete our native plants, and they don’t support native wildlife life like indigenous plants that have evolved to host them. They often crowd out natives and some are even made stronger by mowing—not a good thing. But I’ll admit the splash of yellow did brighten up my travel. Still, a host of native plants would be excellent alternative candidates for this strip of land.

For the most part Hypochaeris radicata is considered a noxious weed. It is perennial and mowing won’t do much to deter it. The leaves lie flat to the ground and thus it escapes the mower’s blades. You prevent the blossom from going to seed and being dispersed by the wind, but this noxious invasive spreads via crown and root sections. It is normally controlled by digging out the tap root or with herbicide. Asteraceae is normally said to be native to Europe but it has been introduced to the Americas, Japan, New Zealand, and Australia. However, the Centre for Agriculture and Bioscience International (CABI) affirms that its native range is the humid Mediterranean woodlands of Morocco, later expanded to a wide variety of habitats. Today it is common to roadsides, orchards, vineyards, landscaped gardens, and often as a lawn weed, and is prevalent in areas east of the Mississippi and on the west coast of the United States.

Colonists likely imported it to North America for its medicinal properties. Many of our colonial plants were introduced for their various uses. Today many impact our native species, prospering at their expense. Nevertheless it is interesting to know that the herbal remedies the plant has been used to address include kidney problems, urinary tract infections, gall bladder issues, constipation, rheumatism, and liver problems. The root contains cortisone and has been used to treat allergies, rashes, and other itchy skin conditions. I discovered one journal article in which a group of scientists studied the biochemistry of Hypochaeris radicata and concluded that the traditional uses have prospective pharmacological prospects as an analgesic, mild sedative, muscle-relaxant and anti-inflammatory (Hindawi Journal- Abu-Izneid, Abdur Fauf… et al v.2018 article # 3868070).

All parts of this herbaceous plant are edible. The Japanese and Greeks grow it for use in salads, and flowers and stems can be steamed or sauteed, or roasted and ground to make a coffee substitute.

So what about the Route 54 right-of-way? It’s clear that this route would be both attractive and useful if planted with a native wildflower mix, so I wondered under whose jurisdiction the area fell. Apparently the State of New Jersey owns this Buena Township right-of-way. It appears to be about 150 feet wide for a stretch of five or six miles. Evidently it was originally thought that a bypass road could be accommodated there that would reroute casino traffic from the south to the Atlantic City Expressway, bypassing the Mays Landing area. This was never implemented.

The South Jersey Transportation Planning Organization (SJTPO ) has some really interesting visions for this unutilized grassy lane. The SJTPO in conjunction with Atlantic County is hoping to connect a network of multi-use trails for which this would be part of a 16-mile component, closing a gap in South Jersey’s trail system. It would be a paved path much like those of converted rails-to-trails that you may have traversed on occasion. Currently it is in the study phase; you can find details at sjtpo.org/acbikewaywest. For now, my input is “Neat, and please plant native plants for pollinators along the route.”

Although the false dandelions that I admired turned out to be a ne’er-do-well invasive, many native plants do need protection. In 2009 the Pinelands Preservation Alliance had Ecological Solutions prepared “Best Management Practice for Pine Barrens Roadside Plant Communities.” Note the word choice of “Pine Barrens Communities,” and keep in mind that the Pinelands is a State and Federal juridical boundary and not a physiographic region. Expressed differently, the pine barrens and its associated plant communities extend beyond the protective regulatory authority offered by Pinelands-associated mandates.

In 2010 the Pinelands Commission announced a program to try to protect native vegetation, including rare species along roadsides. They implemented many of the recommendations made by Ecological Solutions. John Stokes, then executive director of the Commission, wrote, “Roadsides throughout the Pinelands provide important habitat for a host of characteristic, native plants, including some rare species that thrive in these open-canopied, sun-exposed environments.”

The Commission provided county and municipal governments with guidance for managing road shoulders. Establishing tailored mowing schedules and safety precautions has reduced maintenance costs for a number of municipalities and townships that have implemented them, while saving native and sometimes rare plant communities.

The most commonly recommended mowing and maintenance regime is to cut only in March, at six inches or higher. By mowing later in the season the plants’ lifecycle of growth, flowering, seed production, seed dispersal, and seedling establishment are not impacted. It is necessary to post these areas so that maintenance crews know where to abstain from mowing.

Further there are prescriptive measures for maintaining specific safety sightlines so that vegetation doesn’t impede motorists from navigating safely. These are described as such: “The regular-mow zone includes any vegetated portion of the road shoulder within 8 feet from the outside edge of the travel lane. The purpose of this zone is to provide safe emergency vehicle pull-off areas and to allow road maintenance activities including maintenance of drainage swales and access to utilities.”

These initiatives are generally the result of public involvement. How well they are implemented depends on citizens, municipalities, bureaucrats, and leaders who care to make a difference. Currently you can weigh in on the proposed bikeway with SJTPO. If you’re in favor of it you might let them know that you would like to see native flowers along the pathway. Be aware that species that support pollinators are in decline and pretty roadsides may be, too. Your voice might just determine what happens to this right-of-way.