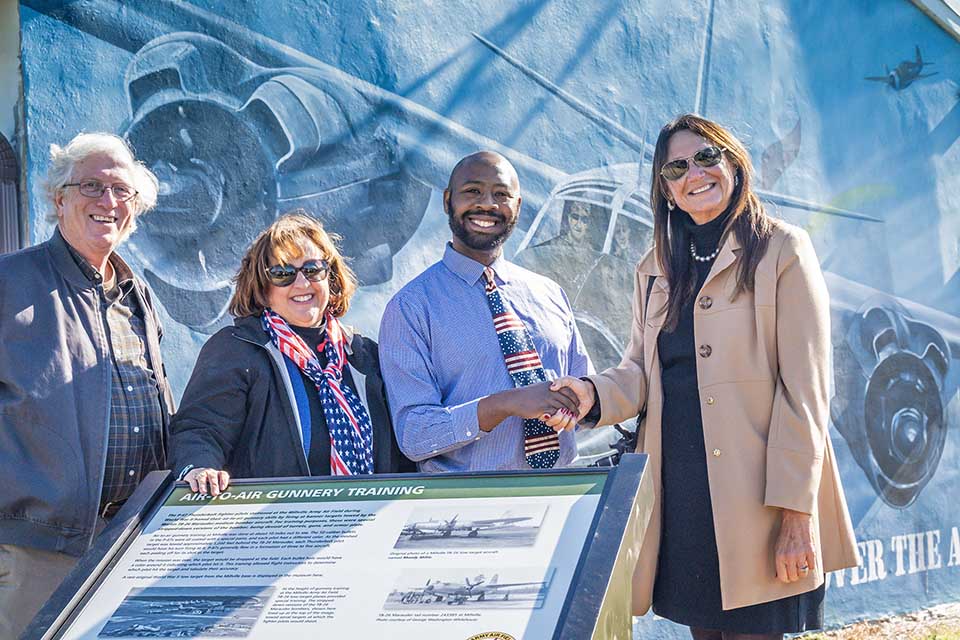 A visit to the Millville Army Air Field Museum (MAAFM) at Millville Executive Airport includes seeing a number of large outdoor murals that tell visually some of the important history that took place here during World War II. Now, added to the visuals are interpretive displays that describe these murals in detail.

“The museum is extremely proud to be able to recognize the World War II history that took place here at Millville Executive Airport,” says Lisa Jester, MAAFM executive director. “Our largest collections of artifacts are displayed in the former base headquarters building, but each of the buildings in the historic district was significant. Young servicemen came here from all over the country to train in various jobs before heading overseas to defend our country’s freedom.

“Our outdoor murals, with their newly installed interpretive displays, tell valuable histories,” continues Jester. “Probably our most important historic artifact is the museum’s operational Link Trainer flight simulator which is kept in the original Link Trainer building. Visitors can now learn more about this premier equipment used for more than 30 years of instrument flight instruction, by seeing the mural and reading its interpretive display—even when the museum is closed.”

The additional two new interpretive displays include one in front of the mural that honors the Millville Fire Department and its important role at the Millville Army Air Field during World War II. Another mural entitled Gunnery Practice over the Atlantic, on historic Building 31, features a huge rendering of a B-26 Martin Marauder and describes the type of air-to-air gunnery training that took place at Millville during the war.

“We were very fortunate to have World War II veterans George Washington Whitehouse who flew the Marauders at Millville and Charles Osborne who flew P-47 Thunderbolts attend the mural unveiling in November 2020,” says Jester. “These two veterans of Millville Army Air Field gave their input into the creation of the gunnery practice mural and are noted in the text of its interpretive display.”

The MAAFM murals were designed and produced by Sam Donovan, mural artist, from Woodstown, who also created the Wall of Remembrance Mural on Millville City Hall and several other murals located in the historic complex of the museum at Millville Executive Airport—each mural documenting a specific aspect of the World War II history of the Millville Army Air Field, America’s First Defense Airport.