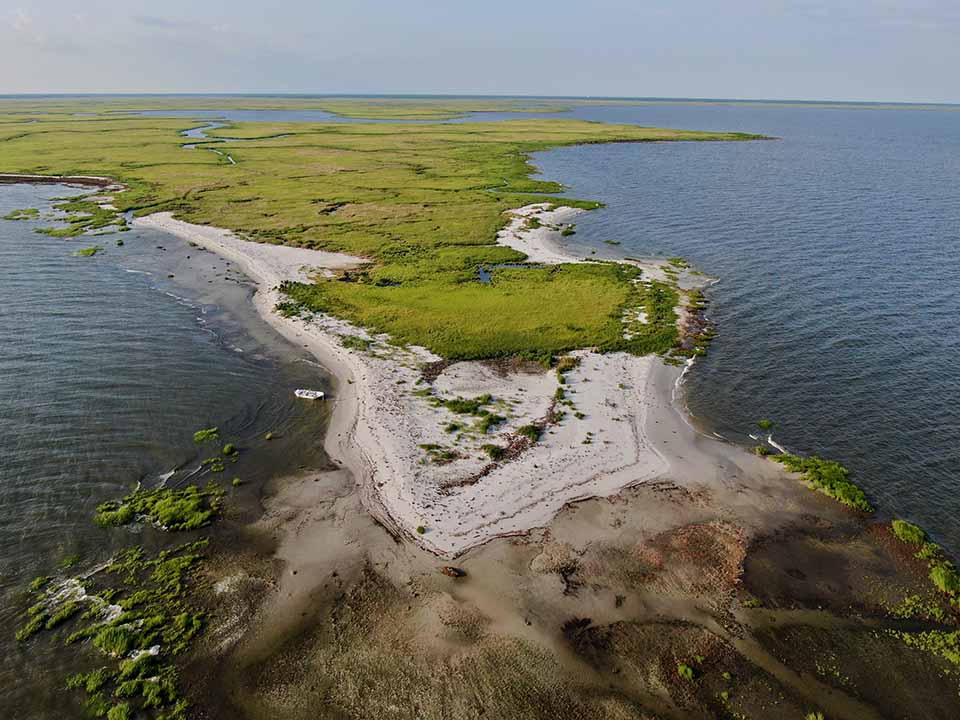 The vast rivers and marshes of the Delaware Bay Estuary are recognized by the Ramsar Convention as wetlands of international importance. The beachfront from Fortescue to the Cape May Canal are referred to as “shorebird beaches” because they support the famed migration of shorebirds during the horseshoe crab spawn. AERIAL Photo: Lawrence Niles
by J. Morton Galetto, CU Maurice River 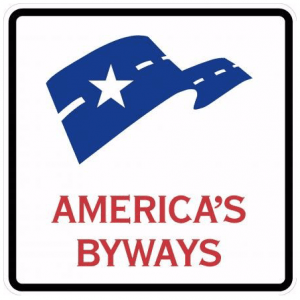 The South Jersey Bayshore Coalition nominated our State’s Bayshore Heritage Scenic Byway for consideration as a “National Scenic Byway.” In mid-February the Coalition received word that we have been approved for the designation. This is cause for celebration!

The Federal Highway Administration defines the National Scenic Byway Program as an arm of the Department of Transportation. It is a grassroots collaborative effort established to help recognize, preserve, and enhance selected roads throughout the United States, recognizing certain routes as National Scenic Byways based on one or more archeological, cultural, historic, natural, recreational, and/or scenic qualities.

I thought you might like to read our characterization of the Byway from the nomination we filed in the Spring of 2020. Included in these materials were maps of 16 featured areas, turn-by-turn descriptions of miles of roadway, and many more details. This should give you the flavor of our special Delaware Bayshore environment.

The Bayshore Heritage Byway (BHB) is a 142-mile route along New Jersey’s southwestern Delaware Bay coast from Salem County to the southern tip of the New Jersey peninsula. The byway begins approximately 2.2 miles east of the Delaware Memorial Bridge on Hawks Bridge Road at the Salem Wildlife Management Area/Mannington Boat Ramp, at mile marker 1.53, and it meanders south from its origin through 11 historic districts: Salem City, Historic Greenwich, Bridgeton, Newport, Mauricetown, Eldora, Dennisville, South Dennis, Cold Spring, West Cape May, and Cape May City. Its southern terminus is Cape May Point State Park. The Bayshore Heritage Byway and its spur roads hug New Jersey’s southwestern coast and immerse visitors in its massive estuaries, vast farmlands, and the historic villages of Salem, Cumberland, and Cape May counties.

Along New Jersey’s “western shore” the Byway guides visitors around the Delaware Bay through a rich mosaic of views typified by expansive protected landscapes and historic villages. BHB tells the story of centuries of interrelationships between the people and their natural resources. Eleven historic districts—primarily villages—are nestled along this route. They share a historic and present-day commonality of reliance on the bounty of the region. In addition to traditional agriculture, Bayshore communities grew and thrived based upon natural assets including fishing, trapping, crabbing, oystering, clamming, and caviar processing, along with shipbuilding, iron-making, milling, glass-making, and salt hay farming. It is the ongoing dependence on these resources that makes the region distinct from so many other coastal areas whose livelihoods are disconnected from their landscape.

Visitors to the BHB experience the full breadth of the region’s rich cultural and architectural history. The Byway has colonial period homes ranging from modest log buildings to the most elaborate eighteenth-century patterned-brick homes in the US, built by Quaker descendants of the first permanent English-speaking settlement in the Delaware Valley. Visitors wind their way through open farmland and quaint settlements, seeing ship captains’ homes and Victorian architectural influences, culminating in the elaborately-scrolled and gaily-painted summer “cottages” of Cape May.

Churches reflect a variety of denominations illustrative of an early tolerance not seen in many other eastern coastal communities. Acceptance is further exemplified by the presence of Underground Railroad locations.

Three historic small cities add to the experience of the byway: Salem, Bridgeton, and finally Cape May. Each offers National Register historic districts with the latter also having National Historic Landmark designation.

Spurs allow sightseers to view the Bayshore with all its expansiveness and solitude, and to feel dwarfed by thousands of acres of spartina grasses. In fact, in places the flatness and extent of the marsh prevents one from seeing the bay. Locals take evening drives just to bask in the glorious sunsets over the marsh plain and bay. Unbeknownst to most viewers, this complex of water and forests has earned The Nature Conservancy’s badge as one of the Last Great Places on the earth. It has also been awarded a number of other important designations: by RAMSAR as a Wetlands of International Significance, as a Western Hemisphere Shorebird Reserve, as part of the National Estuary System, along with over 17 other state, national, and international distinctions. The Pinelands National Reserve and Pine Barrens Byway both intersect at the BHB’s southern end.

This wetlands complex, in conjunction with a forested buffer, sustains globally significant migrations of shorebirds and other species each spring and fall. It is very common to see groups of people birding along the Byway’s preserved stretches, and Cape May Point State Park is often referred to as the Raptor Capital of North America. Depending on the season, visitors might experience a number of wildlife celebrations or visitations linked to migrations and harvests. The Purple Martin Festival, the Eagle Festival, Monarch Mania, the shorebird migration / horseshoe crab spawning phenomenon, snow goose and raptor migrations, ham and oyster dinners, crab feasts, and seafood festivals are but a sampling of the rich variety of opportunities celebrating the rich resources of our region.

Travelers will cross many tributaries of the Delaware River. The three largest are the Salem River with its Mannington Meadows, the Cohansey River, and the Maurice River. All three are on the Nationwide Rivers Inventory, and the Maurice and three of its tributaries are designated as part of the national Wild and Scenic Rivers Program.

The most frequent comments heard from people who visit the Byway relate to the sense of calm, restoration, and solace they experience at the southern tip of our nation’s most densely populated state. They speak of being taken back in time, via the historic structures and the beauty of the natural surroundings, to a landscape that has not been overrun by gas stations, big box stores, freeways, and housing developments. Within the context of the broader Mid-Atlantic Region the Bayshore Heritage Byway offers respite from a much busier world.

CU Maurice River members greatly enjoy travelling the Byway and checking out its natural sites, historic features, recreational opportunities, varied vernacular architecture, rich archeological history and scenic qualities. Many aspects of these resources can be safely enjoyed in spite of the pandemic. Come out and see for yourself! n