This story is being republished under a special NJ News Commons content-sharing agreement related to COVID-19 coverage. Link to story: patch.com/new-jersey/newbrunswick/cdc-panel-issue-recommendations-j-j-shot-late-friday

The state Department of Health says the Johnson & Johnson COVID-19 vaccine will resume in New Jersey after its use was halted because of blood clotting cases.

The Department of Health on Friday night notified its vaccination sites and providers and that they may resume administration of the one-dose vaccine. The action comes as the Centers for Disease Control and Prevention and the Food and Drug Administration recommended that the pause on the Johnson & Johnson vaccine be lifted.

The action also followed the CDC Advisory Committee on Immunization Practices recommendation on Friday afternoon, by a vote of 10-4 with one abstention, to resume administration.

The federal agencies said they have “confidence that this vaccine is safe and effective in preventing COVID-19.” The FDA “determined that the available data show that the vaccine’s known and potential benefits outweigh its known and potential risks in individuals 18 years of age and older.”

“This process should demonstrate for the public that the federal vaccine safety monitoring system is strong and should instill confidence in receiving any of the three approved vaccines,” Health Commissioner Judith Persichilli said.

The Centers for Disease Control and Prevention late Friday afternoon recommended resuming the Johnson & Johnson vaccine in the U.S., but adding a label about possibly dangerous blood clotting.

There are now 15 cases of blood clots reported after people got the Janssen/J&J shot, said Dr. Tom Shimabukuro at a public CDC hearing Friday; Dr. Shimabukuro is a member of the CDC’s task force on COVID-19 vaccines.

This was all revealed in a CDC vaccine advisory committee that met Friday for a second time to review the J&J shot. The meeting was publicly recorded and broadcast.

Dr. Shimabukuro said the CDC’s main source of learning about the new cases was from VAERS, the Vaccine Adverse Event Reporting System. He also said VAERS is known for underreporting, so there could be cases that have not been reported yet, he said.

These 15 reported blood clot issues—three of them fatal—are out of 7.98 million Johnson & Johnson vaccines that have been given out in the U.S. The CDC did write that “these adverse events appear to be extremely rare.”

On April 13, the CDC issued this recommendation to pause use of the J&J shot, after six women in America developed rare blood clot issues within two weeks of getting the J&J shot. The women all developed a type of blood clot called cerebral venous sinus thrombosis (CVST) was seen in combination with low levels of blood platelets (thrombocytopenia). All the symptoms occurred 6 to 13 days after vaccination. The CDC called this new hybrid condition of blood clots and low platelets as thrombosis-thrombocytopenia syndrome (TTS).

Pregnancy, obesity and birth control pills are just some of the things that can make someone more likely to develop cerebral venous sinus thrombosis, said the CDC on Friday.

Then on Thursday, an Oregon woman died of blood clot issues two weeks after receiving the Johnson & Johnson shot. The woman was in her 50s, and she was vaccinated at some point before the FDA ordered the nationwide pause on the vaccine, Oregon health officials told media outlets in that state.

In New Jersey, the Johnson & Johnson jab made up less than four percent of the state’s total vaccine supply, with the state much more heavily relying on Pfizer and Moderna, said Gov. Phil Murphy this week.

Murphy expressed hope earlier this week that the federal government would reinstate Johnson & Johnson, saying that was the vaccine public health officials were depending on to vaccinate poorer neighborhoods.

“It’s the single dose, it’s the regular refrigeration. You point and shoot. It’s the one Judy (Health Commissioner Judy Persichilli) wants to put in the back of the mobile vans and just drive deep into neighborhoods,” Murphy said Monday.

“God willing, we’ll get J&J back online,” he continued. “We still need J&J, assuming it’s safe and it checks all the boxes. We still need it as it relates, especially to equity, to get to hard-to-reach places and communities and persons that a two-dose vaccine regime makes it really hard to do.”

Meanwhile, Johnson & Johnson has approximately 9 million doses of its vaccine ready to go as soon as the federal government lifts its pause, CNN learned Friday.

J&J’s one-shot dose was once heralded by leaders across the U.S. as the vaccine that would help officially end the pandemic: It could be delivered via one shot, so there was no need to schedule a second dose and it did not need to be stored in temperatures as cold as the Moderna or Pfizer jab.

But Johnson & Johnson’s shot was plagued by problems: First, there a quality control error at a lab outside Baltimore, and 15 million doses were destroyed. Additionally, FDA inspectors found sanitary issues at the lab, run by Emergent BioSolutions, Politico reported. Then the CDC issued the pause after the fatal blood clots started being reported.

5th annual Art in the Park

“A Laughing Matter” – Comedy Night for the Millville Chamber of Commerce 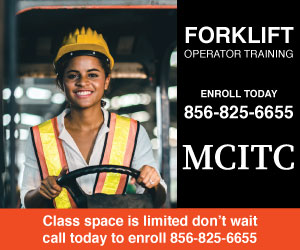 2021 Big Brother of the Year is Jonathan Triantos