What’s the buzz about hummingbirds? The ruby-throated hummingbird that frequents our region from mid-April to autumn is unique in the avian world—and in ours. 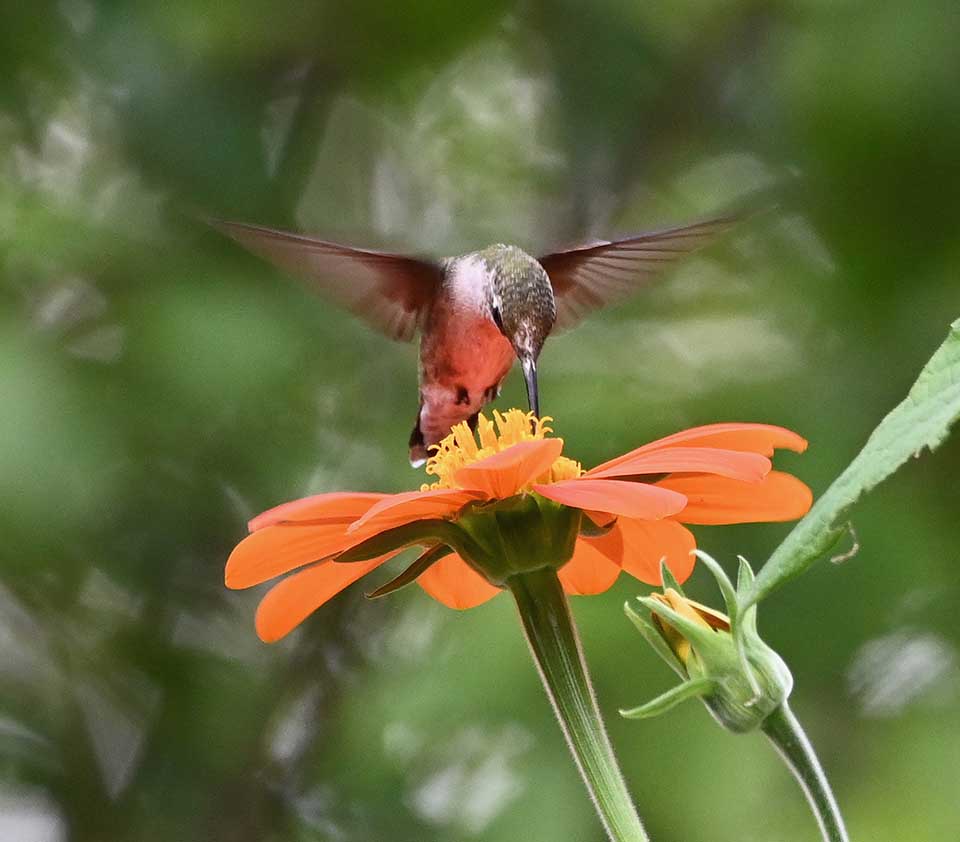 Hummingbirds typically visit 1,000 to 2,000 blossoms a day. This one is feeding on tahonia or Mexican sunflower, an annual non-native species. Monarch butterflies are also fond of tahonia, which they frequent in late summer and early fall.
by J. Morton Galetto, CU Maurice River
Photography by J. Morton Galetto

If you read articles about birds you possibly know a great deal about hummingbirds. With their ability to fly both backward and forward they attract a lot of attention and “buzz”—or possibly “hum”—for such a tiny species. In this piece and next week’s column, I’d like you to learn something you did not already know.

It has only been recently discovered what specifically causes a hummingbird’s hum. At 70 strokes per second, a hummingbird’s wing beat takes some fairly sophisticated instrumentation to analyze. With 3D acoustic modeling and high-speed cameras synchronized, Ben Hightower and a team of other scientists were able to narrow the sound’s source to the bird’s upstroke (2021). The upstroke of a hummingbird actually gives it “lift,” while in other birds it’s the downstroke that helps the bird to rise. And it is on the upstroke that sound is created. At 4,000 beats per minute what we hear is an insect-like buzz.

Hummingbirds begin to arrive here in New Jersey around mid-April from their Mexican/Central American winter digs. Despite their small size, ruby-throated hummingbirds can fly more than 3,000 kilometers, crossing 1,000 kilometers over the Gulf of Mexico in just one flight. Their goal is to breed here in North America and escape the competition and predation in their tropical climes. They breed in the eastern half of the United States and southern Canada.

The ruby-throated is our only eastern hummingbird with the exception of the rufous, whose range is the southeast although we occasionally see it in New Jersey if one wanders off its usual flight pattern during the southbound fall migration. The western United States has a number of species of hummingbirds.

Hummingbirds’ southward return is believed to be triggered by the shorter days at the end of August and beginning of September. This is when they really fatten up and activity at birdfeeders noticeably increases.

What wasn’t known until recently is the technique they employ to store fat. Canadian University professors Kenneth Welch and Christopher Gugliemo (2021) have discovered that in preparation for and during migration, hummingbirds build fat reserves. If body mass fat falls below five percent of a hummingbird’s weight they employ a strategy known as torpor, primarily in the evening when not feeding. They lower their body temperature and slow their metabolism up to 95 percent, thus enabling them to increase fat storage up to 20 percent of their body weight. Since ruby-throats weigh less than a nickel, these measurements have to be very precise.

Other birds have similar methods of conserving energy, most notably vultures. Their meals are opportunistic since they rely on carrion instead of live captures. They employ torpor to conserve energy each evening when meals may not be readily available.

Hummingbirds migrate alone rather than in groups, so it is an inherent ability; you could say it’s pre-programmed and that they know where to go.

Let’s talk about what hummers are doing while they’re here in North America. The males are attracting females with their bright red “gorge,” or neck, and their fancy diving courtship maneuvers. They will fly to heights of as much as 10 to 150 feet (depending on source) and dive repeatedly in a swooping “U” pendulum-like course in front of the female.

I’ve seen them do this at about 30 feet and it surely gets your attention. They chitter and their wing sounds are especially loud; they will not be ignored in their rapid speed dives. If an individual is selected by the female they will drop to the ground for copulation.

The red irradiance of the male’s neck feathers is caused by structural refraction. Microscopic structures at the surface of the feathers reflect in one direction only. This is why the male hummingbird seems to flash red in a now-you-see-it-now-you-don’t fashion (Sibley).

After mating the male will likely court other females. There are more females than males and a promiscuous mating system helps to sustain the species. The female will have the sole responsibility for raising the brood. She will line her quarter-size cup-shaped nest with spiderwebs and typha/cattail seeds. I’ve watched a female gather the soft heads of typha, kiting along the hotdog-shaped seedhead and plucking a piece off into the front of her bill. Each subsequent pinch pushed back the prior pieces until she looked as if the length of her bill was whiskered by a cinnamon-colored mustache!

Hummingbirds are not the only ones to discover the many uses of these seedheads. North American pioneers gathered the cottony seeds, referred to as “swamp down,” for pillows, quilts, and doll stuffing, as well as for insulation.

Hummer nests will be set on the top of a horizontal limb and be heavily camouflaged in lichen and moss. Their appearance will be as if they are part of the branch where a limb broke away. A bird will lay two white jellybean-size eggs and incubate them for two weeks. This may be extended to 20 or more days if the weather is chilly.

When the chicks are born the female will feed them a regurgitated mixture of nectar and insects. The chicks will fledge in about three weeks, with juveniles closely resembling the females. David Sibley suggests that adult females tend to fan their tails more when hovering than do young birds, and juveniles’ tails are held more stationary.

Females will often raise two clutches and begin building the second nest before the first brood has fledged. Raising chicks requires a lot of food deliveries. Hummingbirds drink 100 percent of their body weight daily, consuming up to half of their weight in sugar every day. On average they visit between 1,000 and 2,000 blossoms a day. But they need more than nectar to sustain them. Insects provide protein for them and their young.

There’s more to learn about this fascinating little bird, including how to attract them to your yard, so check back next week for more.