Twin brothers face off on the baseball diamond as they each play for rival college teams. 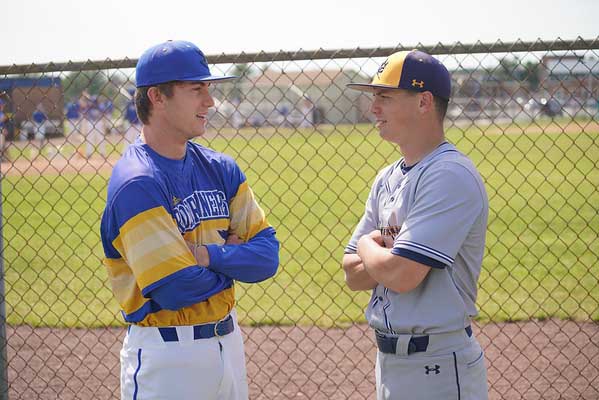 Steven Maiers, a relief pitcher for the Gloucester Roadrunners, left, and Ben Maiers, a starting outfielder for the Cumberland Dukes—twins, best friends, and rivals. Throughout their lives, Steven and Ben Maiers, twin brothers, and Rowan College of South Jersey (RCSJ) baseball players, have been teammates on and off the field. That is until Fall 2021 when they embarked on their higher education and athletic journeys. They both ended up at the same school, but on different campuses and different teams.

Steven, who is older than Ben by a mere three minutes was recruited by RCSJ Gloucester and is a relief pitcher for the Roadrunners. Ben was scouted by RCSJ Cumberland and is a starting outfielder for the Dukes.

The brothers, graduates of Kingsway Regional High School in Gloucester County, are now on opposite sides of one of the fiercest rivalries in Region XIX sports.

“That’s kind of just how it ended up. Because recruiting-wise, Cumberland never really recruited me and Gloucester never recruited him,” said Steven. “I don’t know how that happened, but we were like, ‘alright.’”

“We never really had the same aspirations of going to the same school,” Ben said. “He wasn’t even really sure he was going to play baseball in college.”

Finding out that Cumberland and Gloucester were adversaries in the landscape of sports was a surprise to both.

“We didn’t really understand how big of a rivalry it was,” Steven added. “When I got to Gloucester everyone was like ‘Your brother’s at Cumberland? That’s our rival!”

When they realized the intense competitiveness that takes place between the two teams, Steven threw down the gauntlet. “I told him to be ready, we’re going to try and beat you.”

In early April, when the Roadrunners and Dukes went head-to-head in a three-game series, it was the first time the twins played against each other on the diamond. Gloucester won that round, winning two out of three.

“I would like to have beaten them three times,” Steven said with a grin. “We’ve faced each other when we were on the same team, but not on opposing teams.”

“Seeing him in the opposite dugout is different,” said Ben. “It was weird looking over on the other side and he’s standing over there. He’s usually standing right next to me in the same dugout.”

Prior to enrolling at RCSJ, the twins spent four years at Kingsway. They were multi-sports stars, playing football and baseball, and helped the baseball team win the conference championship their sophomore year. The brothers left a lasting legacy at the school.

“Ben and Steven were two of the best young men I have ever had the pleasure to coach,” said Bill Alvaro, Kingsway baseball coach. “They are both extremely competitive and will do anything to help their teams win. They are both a huge reason for why we are starting to experience the success we have here at Kingsway.”

Currently, Gloucester is ranked No. 2 and Cumberland is ranked No. 7 in the nation, respectively. Steven and Ben are key contributors to their squads.

Steven, a Biology major, appeared in 13 games during the regular season. He finished with a 1-1 record with two saves, for the Roadrunners. In 17 innings, he allowed only 18 hits and six earned runs. He averaged 10.59 strikeouts per game.

Ben, an Education major, was one of the top hitters for the Dukes. He finished the regular season with a .377 batting average and belted three home runs, had 23 RBI, scored 51 runs and stole nine bases.

Both teams advanced to the May 21 Region XIX Final Four Tournament, played at Gloucester’s home field, where the RCSJ Gloucester Roadrunners earned an automatic bid to the NJCAA Division III World Series when they defeated the RCSJ Cumberland Dukes 9-1 in the Region XIX/N. Atlantic District Championship game.

In years to come, there’s a chance the brothers may face each other on the field. Years of being teammates would make the potential match-up the ultimate challenge for both.

“If I face him, he’s going to know what I’m going to throw,” Steven admitted. “He’s always been watching me pitch … he knows what pitch is coming next. (Ben was his older brother’s catcher for many games throughout their baseball careers).

Since the brothers, and best friends, are now rivals, it’s no surprise some trash-talking occurs between them. “He always says he’ll carve our team up,” Ben said, “and I’m like yeah, okay Steven. I’ll just tell everyone what’s coming. I’ll just say it loud and no one is going to get mad because we’re brothers!”

When asked if he would play some sweet chin music for his brother if they faced each other Steven replied, “I don’t know. I’m going to let my pitching coach call pitches, and then execute.” Then after contemplating for a moment, “Maybe if we’re winning by a lot, you never know. I might throw one at him,” he said with a chuckle.

“If we ever face each other, I’m not going to lie, I’ll probably start laughing at first,” said Ben. “If he hits me with a pitch, man, I’ll go nuts. But it’ll be a good battle. He’ll probably just play games with me, but we’ll see.”

Ben imagined what his reaction would be if he got a hit off his older brother. “I would chirp like crazy!” he said with a laugh.

Steven shared his thoughts on what a potential match-up between him and his twin would look like. “Everyone on my team and everyone on his team would know that I’m facing my brother, and everyone would be into it.

“So, if I strike him out and make him look like a fool, that would be awesome.”

For information about the Rowan College of South Jersey athletic program, visit RCSJ.edu.